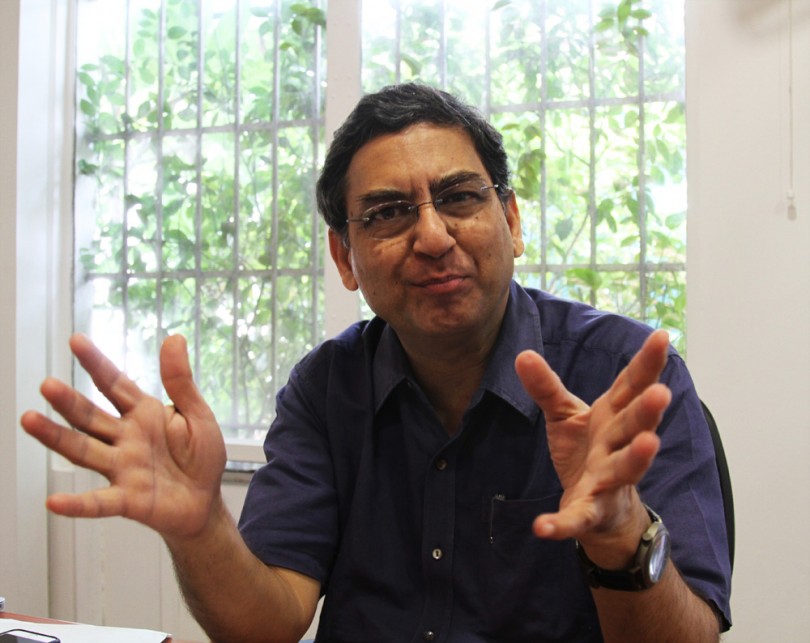 After 34 years in the IAS, Pravesh Sharma, the former managing director of Small Farmers’ Agri-business Consortium takes voluntary retirement to try his hand at selling fruits and vegetables differently. He hopes it will be a star performer and attract youth with innovative ideas to agriculture. He tells Vivian Fernandes he wants the business to be profitable but also give farmers a larger share of the retail value. This story was first published in www.yourstory.com

It does not pretend to be smart. The name does not look like an equation to set itself apart as a start-up. Sabziwala is as simple as it can get. It supplies fresh fruits and vegetables in packs that are pre-weighed and pre-priced.  For customers who are used to tweaking the ends of ladies finger for tenderness or pressing tomatoes for firmness, it can be quite unsettling. But Pravesh Sharma believes he can break the habit by supplying quality produce at prices that are a tad less than those of Safal, Mother Dairy’s market leading brand in the Delhi region.

‘We are in a sense productising F&V.  F&V should not be associated with this loose unbranded product on a pushcart or anywhere else,’ says co-founder and CEO Sharma, 57, who took voluntary retirement from the Indian Administrative Service earlier this year after 34 years of service. A student of history from Delhi University, Sharma brings 18 years of experience in agriculture, including as agriculture secretary of Madhya Pradesh and India representative of the International Fund for Agricultural Development. His last major stint was as managing director for five years of Small Farmers’ Agri-business Consortium (SFAC), which encourages farmers to set up producer companies with guidance and grants.

Sabziwala began commercial trials in June in Delhi’s sub-city of Dwarka.  Currently it has 32 outlets there including two own stores, plus three in the south-west neighbourhood of Janakpuri.  It intends to go up to 100 by year-end and 500 by next March, which should cover most of the city’s major neighbourhoods.  Initially kirana shops hesitated to stock vegetables as they considered it infra-dig, but now they are queuing up, says Sharma, because it brings footfalls for other groceries.  An advantage of being a franchisee of Sabziwala is vendors do not have to haggle in mandis at dawn. The stuff is delivered to their doorsteps based on indents received the previous day. The unsold stuff is picked up in the evening. That which passes the grade is freshly packaged, labelled and despatched the next days. The rest is sold to dhabas and low grade restaurants, which prize price over quality.

‘Sabzi ka experience bahut acchha hai,’ says Renu Gill, a home maker who set up retail vend a couple of months ago in Dwarka Sector 7, with brother-in-law Amit Pal Gill, a TV cameraman.  ‘People like the concept of pre-packed,’ she says.  Her daily turnover from fruits and vegetables averages Rs 6,000 of which she retains 15 percent. Saroj Dhall also of Dwarka Sector 7 says she used to buy Safal but has shifted to Sabziwala because of lower prices and better quality.  Santosh Kumar, who has an outlet just outside Sabziwala’s distribution centre at Dulsirus village in Dwarka, says his daily turnover is between Rs 8,000 and Rs 10,000. He intends to get out of selling chai and samosas to focus fulltime on vegetables.

Currently, Sabziwala does about 17 tonnes a day, divided almost equally between retail and institutions. It has roped in nine canteens of automaker Maruti Suzuki India.  This is a far cry from the 300 tonnes which Safal sells every day in the National Capital Region through 350 outlets. But Safal began 30 years ago in 1986.

About two-thirds of the produce is procured directly from farmers’ organisations or aggregators based in Panipat, Bhaktawarpur near Delhi, Agra, Indore, Nashik and Ramda. They get prices obtaining at Azadpur, Delhi’s biggest fruits and vegetables market, without having to pay for transportation, commission fees and other charges. Vendors pay the company every evening; in turn it pays the farmers every week. Currently, the company does not recover overheads. It even bleeds on the stuff it sells because of discounts. Sharma says it should start making money in about a year or two when volumes should cross 40-50 tonnes.

‘I wanted to create an enterprise around agriculture to demonstrate it can be a viable, inclusive, sustainable and scalable. I chose fruits and vegetables because this is the most fragmented value chain,’ says Sharma.  His is an asset-light model. Sabziwala owns very little.  Everything – warehouses, trucks, labour – are leased in or contracted.  ‘There is no displacing anybody, no investment in malls and supermarkets,’ he adds. Sharma believes India is unique as a country which produces the most quantity of fruits and vegetables which it itself largely consumes. He believes India’s retailing infrastructure is the most efficient, though it would help to cut the wastage.  And no, India does not need a cold chain. It is a necessity in the cold countries to keep vegetables from freezing. In India simple post-harvest practices will do.  Sometime you simply do not stock stuff that does not keep, like palak and dhania during high humidity days as they turn soggy.

Sabziwala believes in crossing the river feeling stone from stone. Initially it thought it would operate through an app. Customers could see what was on offer and the prices, and place orders which the nearest pushcart or vendor would home deliver. ‘As of now the app is a non-starter,’ says Alok Srivastava, co-founder and head of operations. ‘We could not manage the orders.’ Instead, the app tells buyers were the franchisees are.  Home delivery is still an option but the feature will be activated only for vendors who can guarantee delivery within an hour.

Sabziwala would like to buy most of its stuff directly from farmers. In intends to enter into contract farming arrangements with them, providing them agronomic guidance and access to cheaper inputs like seeds, fertilizers and credit.   An app could help aggregate the farmers. They can tell the company how much of what quality and quantity they have to sell. That is how the combination of smartphones and mobile internet will empower farmers who are currently atomized, says Nandan Nilekani, the man behind Aadhar identity numbers.  Currently Sabziwala is developing software to track produce from farms to the distribution centre and from there to vendors. The business may be simple, but the technology is not.

Sabziwala has got funding from two angel investors. It is negotiating for venture capital as well. Investors have turned cautious on start-us, admits Srivastava. Fruits and vegetables are also an area where investors have little understanding. ‘We are hoping that this will be one of the star investments and star performers which will give confidence to other young entrepreneurs to come forward and apply innovative ideas in agriculture,’ says Sharma. ‘This is an area that really needs innovation. It needs patient investment which will mature in the medium to long-term.’