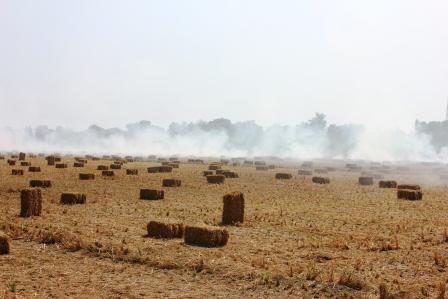 The fungal solution does not degrade paddy straw and stubble in fields quickly enough for conventional seed drills to be used for wheat planting. On straw that is chopped and mixed with soil, it adds one more layer of activity without material benefit, reports Vivian Fernandes.

The Indian Agricultural Research Institute (IARI) has developed a fungal cocktail that can make paddy straw and stubble soft within about three weeks and completely degrade it in about seven weeks when mixed with soil. Delhi ‘s Chief Minister Arvind Kejriwal has asked the chief ministers of neighbouring states to popularise it among their farmers so they don’t clear their fields with fire for planting wheat. Environment Minister Prakash Javadekar has said it will be tried out in farms in Delhi and the surrounding states.  But is this innovation an alternative to existing methods of averting stubble burning?

Pusa Decomposer, as it called after the institute’s campus in Delhi, is a mix of seven fungi that produce enzymes to digest cellulose, lignin and pectin in paddy straw.  The fungi thrive at 30-32⁰C which is the temperature prevailing when paddy is harvested and wheat is sown.

IARI has commercialised the technology. It has licensed six companies. Two of them are ready to start production, IARI’s head of the division of microbiology, K Annapurna said. The fungi are supplied in four capsules. The starter culture is made by adding the fungi to 50 grams of besan and 150 grams of jaggery in five litres of boiled and cooled water. Every two days the starter is fed with jaggery mixed in five litres of water. Twenty-litres of the broth diluted to 500 litres is sufficient for one hectare.

Among those who have tried the decomposer is Ajay Pundhir, 32, of Pipal Shah village in Muzaffarnagar tehsil. An MBA in biotechnology marketing, he gave up a salaried job for farming owing to family exigencies. He has used the decomposer on paddy straw and sugarcane cuttings. Sprayed on cattle dung mixed with vegetable shavings, it produces friable vermicompost, Pundhir said.

But it is an alternative to the methods already recommended to avoid the burning of paddy stubble?  “It is complementary and not a substitute,” A K Singh, Director, IARI said.

Both IARI and Punjab Agricultural University (PAU) began work on microbial decomposition of paddy straw in 2015 when alternatives to burning were not available. Wheat is planted between the last weeks of October and November. It is a five-month crop. There are late-sown varieties that mature in 130 days. The ideal time is the first week of November for wheat to avoid early summer heat which can cause premature ripening and shrivelling of grain. A week’s delay in sowing beyond the optimal time results in a reduction of yield by 150 kg an acre, says PAU’s manual on cultivation practices for winter crops in the state.

Punjab grows rice in about 3 million hectares. It has to be harvested with machines for wheat to be sown in time. The combines cut paddy about two feet above the ground. They leave loose straw in piles on either side after threshing. Raking and baling the straw adds to the cost. Conventional seed drills cannot plant wheat in fields with stubble and loose straw. They need clean fields. Burning is a cheap option.  Even if the fungal mix is sprayed on the straw cover, conventional seed drills will choke on the straw, because the decomposition takes about three months.

Wheat can also be planted in unploughed fields with straw and stubble retained in them. The only requirement is that the straw be chopped and spread evenly across the field after threshing.  This can be done with combines equipped with devices called SMS, which are now mandatory. Seed drills called Happy Seeders cut 5 cm deep slits in straw-covered fields and sow wheat seeds. The retained straw conserves soil moisture and suppresses weeds. It degrades in five to six months on its own. Fields with wheat sown in this manner for three years need 20 kg of urea less per acre from the fourth year onwards, the PAU manual says. This is a method that has been recommended by premier research institutes including PAU, the Indian Council of Agricultural Research (ICAR) and CIMMYT, the international institute for maize and rice improvement.

In 21 percent of Punjab’s area under paddy, the straw is chopped and mixed in soil with machines. Soil microbes are quite efficient in digesting the straw, but the fungal spray will add to the microbial population and quicken the job. Whether the incremental benefit justifies the extra cost and effort will have to be studied. The chopping and mixing of straw is done with a rotavator. A newly-introduced machine called the Super Seeder combines the work of a rotavator and a seed drill. Farmers might prefer this machine to the Happy Seeder because they like neat fields.

There is an apprehension that in fields where straw is mixed with soil, microbes, including fungi, will compete with plants for nitrogen when they digest the straw. This can affect plant growth and yield. Hence, farmers are advised to apply urea while sowing and not later at the time of irrigation.

It is important for farmers to stay on the message, which is that straw is best retained in the field, on the surface.  There is a saving in time, cost and emissions from averted ploughing. Incorporating the straw in the soil is the second option wheat growers (and the only one for those who plant potato after paddy). Microbial decomposers are complementary and not an alternative.  There are issues like weed management with the retention of straw on the surface.  Weeds are developing resistance because of repeated use of the same post-emergence herbicides without rotation. These issues need to be addressed. They don’t invalidate the technology.

(Photo of paddy straw bales (foreground) and smoke emanating from a paddy field fire (background) in Punjab by Vivian Fernandes).