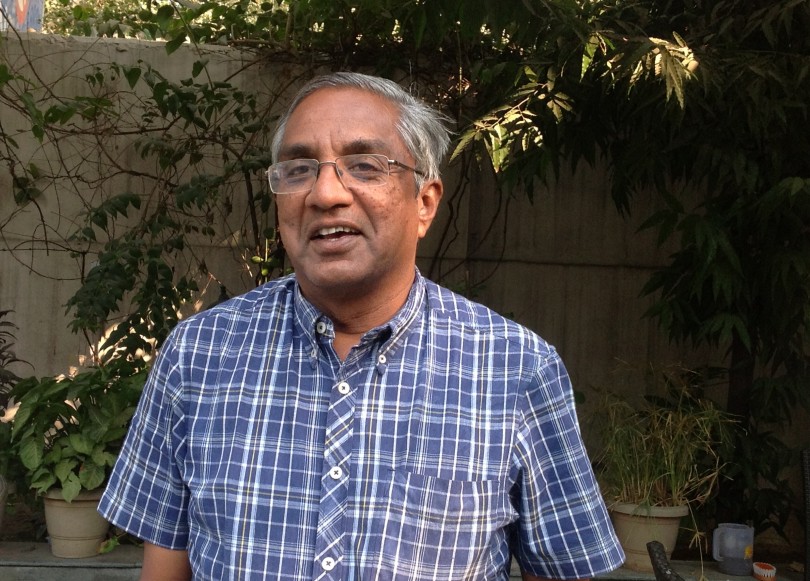 V Ravindran is what you would call a ‘progressive’ farmer. He had doubts about Bt cotton. But he took a chance with the seed and is now a convert, says Vivian Fernandes.

‘Had I completed chartered accountancy, I would have earned three times more,’ says V Ravindran, 56, an agriculturist from Tiruvarur in Tamil Nadu, but ‘this amount of satisfaction i would not get anywhere. It cannot be measured.’

With 60 acres of irrigated land, Ravindran belongs to a very small category of large farmers with holdings of 25-50 acres and above. According to the 2010-11 agricultural census, there were 17,371 large holdings in Tamil Nadu covering 0.21 percent of the farming area.  A student of maths, Ravindran attempted chartered accountancy, and cleared the first stage, but could not proceed beyond because of a family tragedy.

Ravidran has been growing cotton since 1986. For a decade, he planted open pollen varieties.  In 1995, he found hybrid cotton of Mahyco (Maharashtra Hybrid Seeds) more profitable and opted for it. But he held back from genetically-engineering Bt cotton for which the company’s joint venture with Monsanto, a US company, had won commercial approval in India in 2002. ‘I was told that Bt would rob the soil of its fertility. I was carried away by the myths,’ he says.

The campaign by environmental activists and enthusiasts of pristine agriculture in newspapers and news television was reinforced at the local level by fertilizer and pesticide dealers who also double up as seed sellers. Fearing that Bt cotton would hurt their business they bad mouthed it.

Participation in a conference organized by the South India Cotton Association (Indian Cotton Federation now) in Coimbatore was a turning point for Ravindran. One of the sessions at the conference was on Bt cotton. Ravindran was all vehemence. ‘After listening to a scientist I bombarded her with questions saying why only Bt hybrids and not varieties (whose seeds can be reused).’

On the way back, he picked up two packets of Bt cotton seed of 450 grams priced at Rs 1,650 each (now Rs 950) at Kumbakonam. The dealer also gave him non-Bt refuge seeds which are supposed to be sown alongside so that insects that feed on that crop remain susceptible to Bt technology. Ravindran does not recall taking the safety precaution. Chances are like most Indian farmers he did not, which is one reason why the pink bollworm developed resistance to the Bt hybrid which Monsanto had started with (Bollgard I) necessitating the introduction of a second-generation hybrid with two different Bt proteins. But that is an aside.

The Bt gene does not raise output directly. It does so by preventing boll shedding.  The pink bollworm bores into tender shoots. Since he did not know when the eggs would hatch, and the worm had developed resistance to various toxins he would do ‘calendar spraying,’ that is using different insecticides on alternate days. Cost savings from fewer pesticide spays was a direct gain.  ‘I was amazed by the incidental benefits,’Ravindran says. ‘Yield increase was one of them.’

Ravindran does not want the government to give in to anti-GM activists.  ‘GM crops can help us reach potential yield. We can tailor crops to soil,’ he says. He is keen on Bt technology that would fight the stem borer and inter-node borer in sugarcane (which he grows).  By not allowing trials of indigenously developed GM crops, state governments are helping foreign companies, he asserts. Like him, they should see through the myths.

At Bangalore India Bio 2015, the fifteenth edition of the country’s biotechnology event held between 9th and 11th February 2015, Ravndran made a power point presentation about his experience with Bt cotton.

(This interview was recorded in December 2014 in New  Delhi)