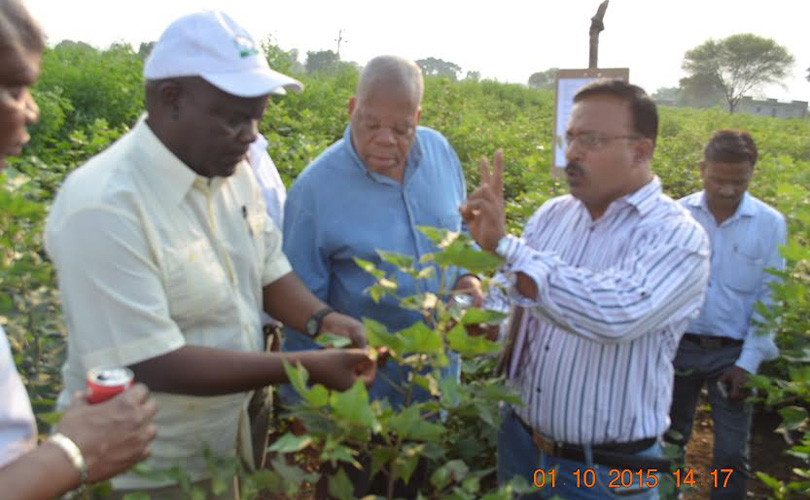 Bhagirath Choudhary is an agricultural scientist and founder director of the Delhi-based South Asia Biotechnology Centre. In the last week of September, he brought a delegation of East and Southern Africans to India to learn about advances in hybrid cotton cultivation. This report is based on that tour.

A woman pollinating cotton blossoms at a field in Jalna on 1 October 2015. Photo by Bhagirath Ch0udhary.

Hybrid or cross-breed refers to any offspring resulting from the crossing of two genetically distinct individuals (parents), whereas high yielding varieties are selected from a single line.  Hybrids are produced to exploit vigor or heterosis, that is, increase in size, yields or other characteristics over those of the parents. Many of the thirty East and Southern African delegates who came to India in the last week of September on a tour of familiarization with India’s advances in cotton cultivation were curious to know if crossing any pair of inbred parents could produce a desirable hybrid.

Combining any pair of inbred parents may not result in superior offspring or hybrid. Breeders have to carefully choose male-female parents that not only synchronize simultaneously but also demonstrate desirable level of uniformity.  A high level of vigour in the female parent and the pollen producing ability of the male parent are the common denominators for production of uniform, superior and high yielding hybrids (F1).   Hybrids are developed not only for vigour but also  for desirable traits like uniformity, improved colour, resistance to pests and diseases and tolerance to climate stress like drought and salinity.

At Jalna in Maharashtra, skilled women farmers showed the African delegation two methods of creating hybrids: (a) conventional hand emasculation and pollination and (b) new generation male sterility based hybridization.

The emasulation of fully developed buds of the female parent has to be done after 1 p.m. The anthers that are likely to open the next day are removed. The emasculated buds have to be covered with butter paper to avoid cross-pollination from neighbouring cotton fields. The next morning, the emasculated buds are pollinated with the pollen of male parents between 8 a.m. and 11 a.m., which is the period of maximum stigma receptivity. The crossed buds are again covered with butter paper for one or two days for proper fertilization. The success of pollination depends on various factors including sowing of parents in the proper ratio, staggered planting and synchronization, skill of the workers and the guidance of expert staff. Depending on the level of skill about three hundred to fifteen hundred flowers are emasculated per day per person.

This is quite a demanding activity. It takes about four persons working for 180 days to produce cotton hybrid F1 on one acre  or two to three quintals of cotton seed. Farmers usually use one kg of hybrid cotton seed per acre. About 95 percent of India’s cotton acreage of 12.5 million ha is sown with cotton hybrids. That is a lot of employment, which fetches higher wages than conventional cotton growing.

(Top photo by Bhagirath Choudhary of Africans watching a demo at a field in Jalna, Mahatashtra)