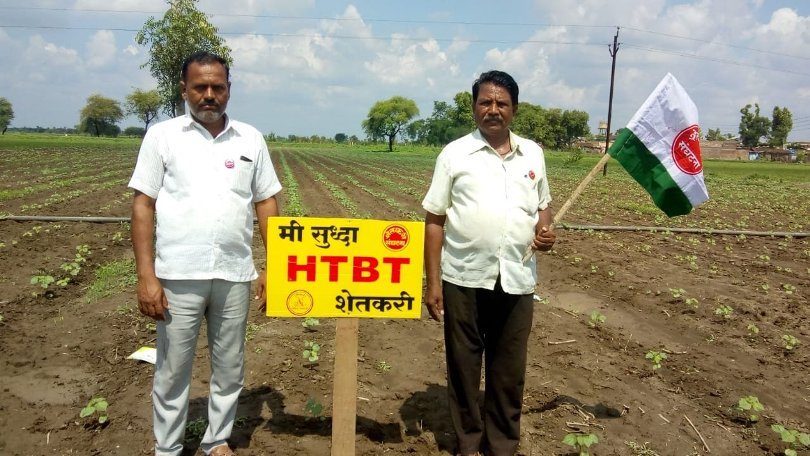 While farmers of Maharashtra and Haryana are planting HTBt cotton tolerant to the herbicide glyphosate and resistant to bollworms in defiance of the law to compel the government to approve it, an executive at one of the largest sellers of glyphosate in the country says the herbicide can be sprayed even in non-HTBt cotton fields.

Anil Kakkar, Vice President – Marketing at Excel Crop Care says unlike in the US where cotton fields are vast and the herbicide is sprayed aerially or with machines, Indian cotton fields are small and spaying is done manually.  Glyphosate can be sprayed in between rows to control weeds by training the nozzle close to the ground or by using a protecting hood to prevent drift from settling on cotton plants, Kakkar says. Excel Crop Care sells glyphosate under the brand name, Glycel.

Glyphosate kills weeds by blocking photosynthesis. Since it is non-selective it can damage non-target plants too. Glyphosate can be made selective by genetically engineering plants (like cotton, maize or soybean) to block its action. Kakkar says this is desirable in the US, Australia, Brazil and Argentina where spraying on vast tracts of crops cannot be done manually.

This is not the case in India. Hence HTBt cotton is not a necessity, according to him. Even now farmers use glyphosate in non-HTBt cotton fields by carefully avoiding cotton plants.

The catch is that glyphosate does not have a label claim for cotton. It is legally permitted for use only in tea plantations and on non-cropped areas.  But even government institutes wink at the law. A December 2013 newsletter of the Central Institute of Cotton Research (CICR), Nagpur, reports of an indigenous technique for application of glyphosate which was developed at its regional research station in Coimbatore. It says tall aluminum tumblers which are available on rent were used to cover cotton seedlings, and glyphosate was sprayed in the field. This was tested by a few farmers of Namakkal district with good results.

The CICR’s July-August 2012 advisory for Punjab says weeds can be controlled with glyphosate by using a protective hood to prevent drift settling on the cotton plants.

Kakkar says if the government wishes, CICR can be asked to provide data to the Central Insecticides Board and Registration Committee so that glyphosate can be permitted for use in cotton fields.