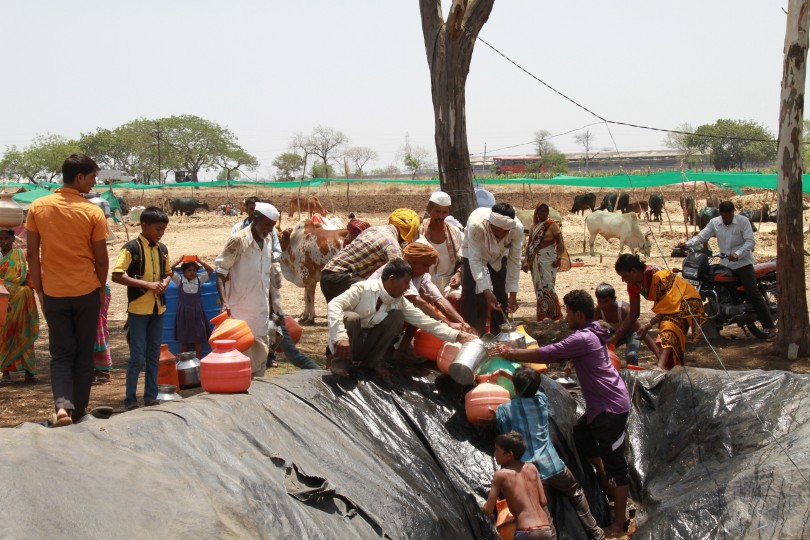 How can the cotton and soybean farmers of Vidarbha and Marathwada supplement their incomes so they can get out of the trap of debt and self-engineered death? That was the theme of union minister Nitin Gadkari’s ninth edition, four-day agricultural exhibition at Nagpur, called Agrovision, to which I was invited.

A promising beginning has been made. In October last year, the National Dairy Development Board commenced operations.  It now has a footprint in five of 11 districts of Vidarbha and two of Marathwada’s eight districts. Milk collection averages 1.25 lakh litres per day which is processed at a refurbished dairy in Nagpur, given by the state government. The target is to get three lakh litres per day in three years, from 60,000 farmers up from 16,000 now.

That quantity will not be absorbed by consumers in the regions’ main cities. It will have to be sold in Mumbai for which a dairy is being set up in Thane.

Farmers were initially sceptical, says Anil Hatekar, NDDB’s western region head. They had been duped by private dairies and were wary. But transparent procurement, where the quantity, fat content and solid non-fat content are measured before the seller, has built trust. Money is credited to the sellers’ bank accounts on the 11th day. So far they have earned Rs 68 cr. This is a steady source of income which takes care of their daily needs.

In 40 of 970 villages where NDDB currently procures milk, farmers are taught ration balancing and silage production. With the help of an Android-based app, farmers can know whether they are giving their animals the right diet, overdosing them with some nutrients and under-providing others. For this they have to tag their animals and feed data regarding weight, lactation stage and current milk yield. Hatekar claims this has reduced the cost by Rs 30 per day per animal. The state will also have to do its bit by vaccinating the cattle and reducing their susceptibility to disease.

In these 40 villages, the animals are being artificially impregnated to produce crosses with the genes of superior indigenous breeds like Gir, Sahiwal and Rathi. Most of the animals are buffaloes, except in Osamanabad where cows dominate. At the event Gadkari urged Chief Minister Devendra Fadnavis to allocate 1,000 acres of land to Patanjali’s Ramdev to breed 10,000 heads of Sahiwal and Gir cattle.

The growth of the dairy industry is tied to the meat industry. Unless non- and post-lactating animals are culled, farmers will not be able to give proper care to the productive ones. This is where ideology clashes with economics.

NDDB does not intend to stay for the long-haul. It will exit once farmer producer companies it will help set up gain the capacity to take over the operations and marketing. That is the model it has followed in five other states.

The farmers of these regions can also supplement their income by growing bamboo, says CD Mayee, former Director of the Nagpur-based Central Institute of Cotton Research (CICR) and Chairman of the Advisory Council of Agrovision Foundation. Bamboo is a versatile crop and can be put to 23 uses, including paper and engineered timber. Vice President Venkaiah Naidu, who inaugurated the event, was presented with a shirt made of bamboo fibre.  The Maharashtra Bamboo Development Board was set up last year to promote cultivated bamboo, using tissue cultured seedlings. India is the largest producer of bamboo; it covers 11.4 million hectares. But China which has 5.4 million ha under species earns more annually: $19.5 billion versus India’s 4.5 billion, says TSK Reddy, Managing Director of the board.

A greater portion of Vidarbha and Marathwada’s agriculture will have to be climate resilient if small farmers are not to move in  and out of poverty. Gadkari said he intended to raise the share of Maharashtra’s irrigated land from 22 percent to 40 percent over the next three years. Much of this will have to be in two rain-dependent regions. But the state has a very poor record of completing irrigation projects. The Ghosikhurd project was estimated to cost Rs 480 cr when work began under Prime Minister Rajiv Gandhi. It will cost Rs 18,500 cr when expected to be completed in 2019.

Access to irrigation will allow the regions’ farmers to diversify out of cotton and soybean, which do not need much water. But the cultivation of the two crops, years after year, is telling on yields. The two regions have more than half of cotton area of the state, which itself accounts for a third of the country’s share. Only 2.7 percent of Maharashtra’s cotton is irrigated, compared to nearly 60 percent of Gujarat’s. There is a wide gap in average per hectare cotton yield: 289 kg and 606 kg respectively in 2015-16. Farmers in the region should be growing short-duration cotton, says Mayee. But they go in for long-duration hybrids, which give better quality cotton. Ideally the pickings should not be more than two, but farmers prolong the cotton crop by giving supplementary irrigation. The longer the life of the cotton plants, which are almost all genetically-modified to be toxic to bollworms, the lesser is their resistance to the pests (because toxicity decreases with longevity). This is one of the reasons for the widespread emergence of pink bollworm resistance in Maharashtra. In Punjab, the cotton crop is terminated after two pickings to make space for another crop. In the Vidarbha and Marathwada regions there is little residual moisture in the soil for rabi crops. So farmers try to make the most of cotton.

The farmers of these regions used to grow jowar and bajra but with food habits changing, their cultivation has declined. Since the perception of millets has changed, these crops might see a revival. If dairying catches on they might get preference as a source of fodder.

This piece was also published in the Financial Express.

(Top photo: Scramble for water at cattle market in Beed during the 2015 drought. Photo by Vivian Fernandes)