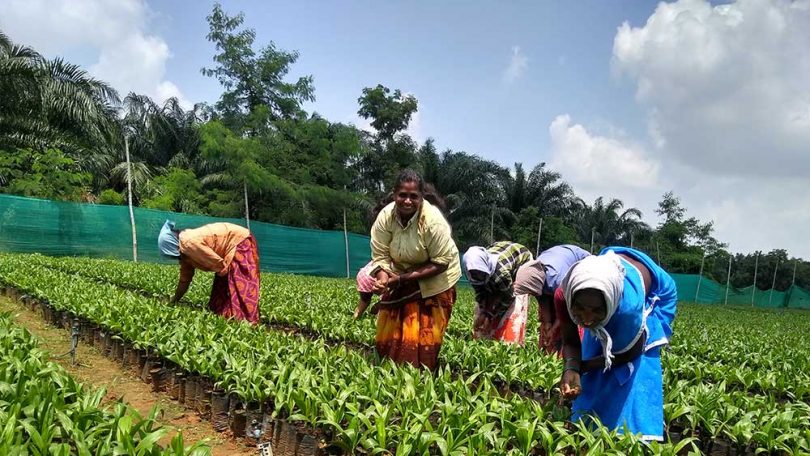 India needs to expand the area under oil palm but the government should rethink its decision to extend the crop to the Andamans. Even in the northeast, only existing fields should be converted to oil palm and no forests should be cut says Vivian Fernandes.

The government’s move to expand the area under oil palm in mission mode, particularly in the north-east region with price support for growers is necessary to dent the country’s huge import bill but it must rethink the extension of the crop to the Andamans.

Care will have to be taken to protect the biodiversity of the northeast region as well. Only land used for other crops should be brought under oil palm. Forests should not be cut.

“There is no question of damaging the environment,” says Ravi Mathur, Director of the Indian Institute of Oil Palm Research (IIOPR) in Andhra Pradesh’s West Godavari district. Unlike Malaysia and Indonesia where companies have captive plantations and rains forests have been displaced, oil palm is a farmers’ crop in India and companies don’t own plantations. Existing cultivable area can be diverted to oil palm, Mathur said. If tribal farmers of the north-eastern region opt for oil palm, they will get a steady income and damage to the environment from traditional jhum or shifting agriculture can be checked, he added.

Mathur did not comment on the proposal to extend the crop to the Andaman region because the issue is “sub judice.” He said the Supreme Court has expressed an opinion against monoculture in the islands and his institute had submitted a report to it on the issue.

Because of abundant rainfall, the Andaman region is best suited for oil palm. But the Rajiv Gandhi government had stopped its cultivation in 1987, says Nasim Ali, who retired as CEO (Oil Palm Plantation) of Godrej Agrovet last December. Ali was a forest service office in the Andamans before he joined the company in 1983. He said the islands’ forest department and, later, the forest development corporation had brought 1,593 ha under oil palm in the islands, before the government ordered a halt. Godrej Agrovet is the largest producer of palm oil in the country. It has farmers on contract growing oil palm on more than 75,000 ha, most of it in Andhra and Telangana but also in Mizoram.

Oil palm cultivation in the Andamans will have to be on forest land cleared for timber. They will likely be large corporate plantations. A network of roads and other infrastructure will have to be created to service the plantations. The economic activity will affect the fragile ecology of the region. It is best to keep the islands off-bounds for oil palm.

Even in the northeast region, civil society groups will have to be vigilant against companies with dubious ethics playing fast and loose with environmental concerns. Extensive illegal coal mining in Meghalaya has made influential persons like Patricia Mukhim, editor of The Shillong Times cautious. She has opposed oil palm ‘monoculture’ in the region in her Facebook posts.

Given weak local governance structures in the northeast and the central government patchy record of protecting the environment, vigilance will have to be exercised. The edible oil industry has come out with an Indian Palm Oil Sustainability (IPOS) Framework. Whether companies adhere to the protocol and whether the protocol makes oil palm cultivation truly sustainable are issues that will need to be independently assessed.

Without oil palm, however, more land will have to be devoted for cultivation of oilseeds to meet the edible oil demand of the country. This is certainly not a sustainable proposition. Oil palms yield 4,000 kg of oil per hectare compared to mustard, which has a high oil content of 42 percent but given Indian average productivity, yields about 400 kg of oil per ha.

The National Mission on Edible Oils – Oil Palm which cabinet approved mid-August is very ambitious. It aims to bring an additional 6.5 lakh ha under oil palm over the next five years – nearly 200 percent of the coverage – 3.5 lakh ha- achieved over the past 30 years. Hopefully, it will not go the way of the government’s other boasts, like doubling farmers’ income by March 2022 or creating a $5 trillion dollar economy.

The mission is a centrally sponsored scheme with an outlay of Rs 11,040 cr, of which 80 percent will be the centre’s contribution. Incentives and price assurance are the tools the government is relying upon.  Oil palms have an economic life of 25-30 years. They start yielding fruit from the third or fourth year onwards. Farmers need price assurance to take the long-term risk. The current formula makes their income volatile because it is linked to the international price of crude palm oil (CPO) which varies as per the price of crude oil (as palm oil is used as biofuel).

The crop is currently very profitable. CPO is trading at $1,195 a tonne in Malaysia, which along with Indonesia supplies 80 percent of the world’s palm oil. Indian farmers with mature plantations (of eight years or more) and an average FFB yield of 19 tonnes per ha (in Andhra and Telangana) make about Rs two lakh per hectare per year. But between 2014 and 2018, CPO was trading in the range of $440 to $600 a tonne. Farmers either incurred losses or made small profits.

Under the new formula, farmers will get an assured price. It is linked to the trailing five-year annual average of wholesale prices. If the price exceeds another benchmark linked to the average of monthly wholesale prices, the central government will compensate the processors to that extent. There is a higher incentive for growers in the northeast and the Andamans.

The subsidy on seedlings has been more than doubled from Rs 12,000 per hectare to Rs 29,000. This will enable processors to supply imported semi-clonal varieties which have higher output and higher oil yield. As 143 seedlings are planted per hectare, the subsidy comes to Rs 203 a plant. When the subsidy was lower, farmers were given lower-yielding Tenera crosses. Subsidy has also been provided for setting up processing units in the northeast.

Godrej Agrovet’s CEO Balram Yadav is quite kicked by the promises. If they are implemented in letter and spirit, his company will bring in an additional 1 lakh ha under oil palm he says. But he insists on the central government being in the driver’s seat. He has little faith in state governments being able to deliver as they are chronically short of funds.

Yadav sees area under paddy in the southern states being diverted to oil palm, because of high labour costs. This will be good for the environment, he says. Paddy in Andhra needs about 300 lakh litres of water per hectare compared with 67.5 lakh litres for oil palm. Eighty percent of farms on contract to Godrej Agrovet use micro-irrigation (drips and jets). These irrigate just the root zone; there is little wastage.

In the north-east where it rains for about six months a year, the irrigation requirement will be less. But infrastructure will have to be developed. Without a network of roads to connect the villages, the oil palm industry cannot develop. The fresh fruit bunches (FFB) have to be processed within 48 hours – before rancidity sets in. Currently, 28,000 ha are under oil palm in Mizoram. But the oil is brought by tankers to Kolkata for processing at a cost of about Rs 6,000 a tonne.

IIOPR has developed a package of practices to adapt oil palm to Indian conditions. The 9-metre gap between palms can be used to grow ginger, turmeric, bush pepper and medicinal herbs in early-stage, semi-shade conditions. Half-moon terrace cultivation is recommended for the north-eastern hills. The edges of the semi-circular fields cut into hills are slightly raised for water to percolate into the ground.

India is the second-largest importer of cooking oil after China. It imports around 15 million tonnes annually. About 45 percent of this is palm oil, which is mainly used in hotels and restaurants and by the food industry.