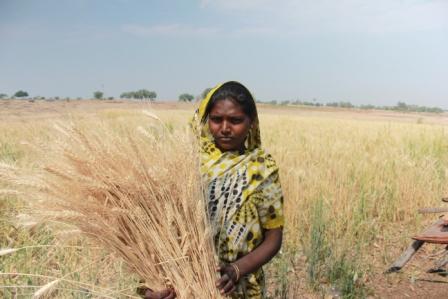 Gujarat has tried to improve the incomes of tribals by shifting them from low-yield, low-income desi maize to more productive hybrids under the Van Bandhu Kalyan Yojana initiated in 2007. Vivian Fernandes reports that the initiative is well-intended, but tribals will have to be hand-held by cooperatives or corporates just like the state’s dairy farmers for them to realize the full benefits of the changeover.

When Shugriben Ratva bakes yellow maize rotis on a clay griddle over a roaring wood fire a tradition goes up in smoke. ‘It is true that rotis made of yellow maize are sweeter,’ she says not unhappily, flipping the roti which she has rolled between the folds of a polythene sheet. ‘The harvest is better and the rates are good. So we grow for the market, after retaining some for food,’ she says, justifying the victory of wallet over palate.

White desi maize has been the staple of the Gujarati tribal.  They find it tastier. But yellow hybrids are more productive and also in industrial demand because of higher starch content. So when Ratva sowed Sriram Bioseeds’ hybrid maize, not only did the calculus of commerce enter her soot-blackened hut in Chhota Udepur, she made a cultural crossover as well.

Shifting tribal farmers from low-yield, low income maize to more productive agriculture has been at the heart of Gujarat’s plan for tribal uplift. The formula is not radical; it was the template of the Green Revolution in the plains. The novelty is in its application to poorly irrigated hilly tribal areas where farms are stamp-sized, the weather erratic and the soil miserly.

The man who infused the tribal development department with this innovating thinking upon taking charge in 2006, was Anand Mohan Tiwari, now principal secretary, education. Tribals constitute 7.5 percent of Gujarat’s population. While they are better off than peers elsewhere, Tiwari saw his mandate as lifting their income and amenities at least to the level of other Gujaratis.

So a five-year, Rs 15,000 crore plan with ten parts was crafted, of which the hinge component was Project Sunshine to raise maize yield. The idea was to persuade about two lakh tribal farmers through personal experience to switch to smart agriculture with deep discounted seed (8 kgs) and fertilizer (150 kg), enough to cover one acre each.  The profit motive of private seed companies was to be the driving force. The government would open up a virgin market for them on the understanding that they would roll out their distribution networks once the threshold of demand for smart seeds was crossed. Multinational corporations like Monsanto, vilified by environmentalists for being the flag bearer of genetically-modified technology, were invited to bid without ideological hang-ups.

‘Our logic was that we do not care who doubles out income, whether it is MNCs or an American company or an Indian company as long as our objectives and goal are achieved,’ Tiwari said, lounging on the spacious lawns of his house in Bharuch as head of a fertiliser company, his mezzanine stop, before the current posting. ‘In that process we used to issue public tenders; there was a rigorous selection process and if MNCs get the tender, so be it, we did not have any value judgement.’

Tiwari had to brave vicious publicity for that decision, though he had Chief Minister Narendra Modi’s tacit backing. Monsanto, which had demonstrated the gains from smart maize through a pilot covering 15,000 farmers at its expense before Project Sunshine was initiated, remained the principal seed supplier as long as he was in charge, along with Dupont’s Pioneer Hi-bred International, United Phosphorous and Sriram Bioseeds.

Another piece of fresh thinking was the involvement of non-government organizations with proven record of rural service like Sadguru Foundation, to distribute seeds and fertilizer and also coach the tribals in the discipline of hybrids crops, bypassing the state’s stretched agriculture extension system. Do-gooding industrial wives like Shruti Shroff were roped in, believing that they would be interested in earning goodwill than pecuniary benefit. A recent study by the Gujarat Institute of Development Research (GIDR) vindicates this faith, as almost all tribals officially certified as poor got their full entitlement of seed and fertilizer — in time. A few complained of having to wait two-three days at the taluka distribution centres, but these are small gripes compared to the corruption rampant in welfare schemes across the country.

The gleam in Premsinghbhai Ratva’s eye when he confesses to earning about one lakh rupees – perhaps a first time event – from four acres of hybrid maize this summer season, attests to the soundness of Gujarat’s tribal uplift plan. A former sarpanch of Pilpur village in Chhota Udepur, he says the shift from desi has meant a switch from growing for subsistence to producing for the market. He claims a yield of 30 quintals an acre, compared to the average of eight quintals in these parts.  ‘There is fayda in yellow maize,’ he asserts.

It is an experience which Vithalbhai Jemta endorses. It drives him to Jetpur or Tejgarh, if hybrid seeds are not locally available. Jemta impresses with his knowledge of plant spacing and fertilizer application. The cost-benefit trade off however eludes Bapubhai Silot of Dahod’s Bambori village. Owing a tractor, a mobike and a large house, he hardly seems poverty stricken but subsidy capture by elders like him can have a beneficial demonstration effect on those lower down in the village hierarchy. When government supplies arrived late last season, he plumped for desi. ‘Yellow is good,’ he says, ‘but we must get the seed before Chomasa (June),’ hinting at the difficulty that the government is likely to face when withdrawing subsidies.

But Milapsinh Padwal, a seeds retailer in Dahod’s main bazaar says demand for hybrid seeds is rising. Instead of damaging his business as feared, the government’s subsidized seeds programme has boosted it. Last year, he sold 12 tons of hybrid seed in just two months, enough to cover over 800 acres, when government supplies arrived late.

Evaluation studies endorse anecdotal evidence of yield increases. Surveys by Anand University and GIDR show that hybrids have doubled the yield but savings have not kept pace because of the higher input costs. Private companies can help by lowering the price of seed and rolling out their distribution network. They owe it to a government for lubricating their entry into a tough market. They are not making enough noise either. Prakashbai Ditabhai, a non-tribal school-teacher farmer was unaware of hybrid maize, till be sought advice from a relative. Even then, he did not follow the farming protocol, though luckily, he got a good yield.  Gyanendra Shukla, Monsanto’s CEO for the India region, says subsidies must end before demand emerges.  He should instead take the lead in creating demand by by installing distributors.

Public agencies, like the maize research institute, can help by scaling up production of seed instead of whinging that private companies are gaining at taxpayer expense. Sadguru Foundation’s Harnath Jagawat says Anand University’s Gujarat Makkai-6 seed is as good, if not better, than Monsanto’s. What is more, it takes about three weeks less to mature. When weather is whimsical, a month shaved is a crop saved. This year, he got entire villages to grow the seed and sell to 71,000 farmers without subsidy. Next year, he expects to double the number.

Tribal farmers should be wedded to profit, not to any crop. GIDR says cotton and potato leave more on the table.  An Amul-type cooperative, processing companies engaged in contract farming, or even a state-funded special purpose company which self-destructs on achieving desired outcomes within a set period of time can take the logic of Gujarat’s innovative approach to tribal welfare forward. This will be less fiscally-straining than a rights-based approach to poverty alleviation, which tugs eternally at the udders of the state.

(This report was made possible by the Inclusive Media Fellowship of Delhi’s Centre for Study of Developing  Societies. Reporting for this story was done in February and March 2013).