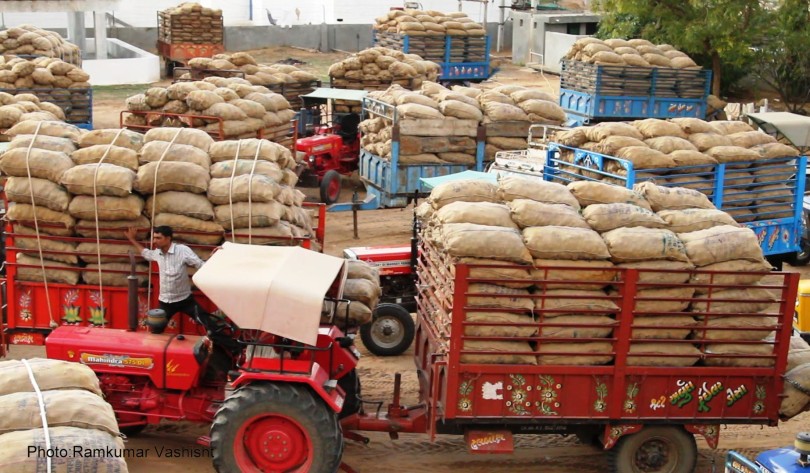 Governments need to encourage contract farming so that farmers are insulated from price volatility and can concentrate on increasing their incomes by raising productivity. There is still a herd mentality among farmers, who think they can out-guess the market. The little gains they make in some years, they more than lose when prices slump. This is one such year, and the winners among Gujarat’s potato farmers are those who stuck to doing what they know best – and not punting. This report by Vivian Fernandes, which is preparatory to an upcoming TV series on CNN-IBN on ‘Smart Agriculture’ was published in Financial Express on 17 Feb, 2015.

At Vinayak cold storage in Deesa, a town in Gujarat’s northern Banaskanta district, tractors over-laden with bags of potato occupy every foot of available space forcing people into reptilian movements through them. Farmers, some white-turbaned and others long-limbed and sporting single earrings, get restive as a quick end to their long wait does not seem in sight. Seeing our television news camera, one of them hisses that government subsidy for cold storages is not getting to farmers as it should, drawing placatory gestures from the owners. He is not entirely right. Potato growers in small groups tend to set up cold storages in this part of the country, with help from the state and the assurance that their own combined supply will occupy a substantial part the room. Of the 145 refrigerated potato warehouses in Deesa, most are farmer-owned, says one of Vinayak’s thirteen partners, Valaji Chaudhary. Those queuing up at the godowns are growers of table varieties – Kufri Badshah and Kufri Pukhraj –developed by the central research institute in Shimla. Prices last year were Rs 10 plus a kilogram, driven by exports caused by crop damage in Pakistan, and forcing a stampede to the crop in the following sowing season. The district’s area under potato rose from 45,000 hectares to 52,000 ha says Ramji N Patel, who heads the potato research station at Deesa. Weather played sport, and a rich harvest has sent prices crashing to Rs 4 a kg, a rate at which most farmers who bought seed at fancy rates last year will break even or make a loss,  says Patel. Those on contract  to McCain, a family-owned Canadian company which sells own brand tikkies, wedges and fries, and also supplies to McDonald’s, the US fast-food chain, are relieved. The Rs 8 a kg guaranteed them is double the spot market price. This is recompense for the notional loss they suffered last year when they had to make-do with Rs 7.50 a kg.

Kantibhai B Patel, a contract farmer.

‘Contract farming is good because the risk factor is zero,’ says Kantibhai B Patel, 45, of Iqbalgarh village in Banaskanta’s Amirgarh taluka. A post-graduate in chemistry, Kantibhai has grown potatoes on most of his 30 acres, all of it under contract, a practice that he has not broken for about a decade.  Assured of price, he focuses on productivity to increase his income per acre. Ismailbhai Rahimbhai Sheru, 61, of nearby Rampura Vadla village, has 12 acres under potato, all of it on contract to the Canadian company. Experience tells him that contract farmers lose out at times but make up over time. By dint of hard work and innovative farming, this B.Com graduate (‘I am a first class first’) has made the five acres he inherited stretch to 400 acres on which he grows a variety of crops as a hedging strategy.  Despite the risks, ‘smart work’ can make farming a very profitable activity,’ he says. Deesa has been growing potatoes since colonial times.  At that time it was confined to the bed of the rain-fed Banas

river. With the river drying up, the activity spread to its banks. In the early 1990s, McCain followed McDonald’s to India. As North India’s cold weather was not ideal for potato growth, it settled on Banaskantha and Sabarkanta districts of Gujarat in 1998. Towards the middle of the last decade, it began contract farming in these two districts, to feed its processing factory in Mehsana. Modern technology-led agriculture has to work backwards from plate to plough, to use agricultural economist Ashok Gulati’s phrase, and proof is provided by the two Gujarat districts. Processing potatoes have to be high in solids and low in sugars (which caramelise and turn wafers and strips brown when fried). For fries oblong varieties known as Santana and Kennebec are preferred; wafers tend to vibe with round and plump Lady Rosettas, the label derived from their blush pink peels. Those on contract to the Canadian company get seed at half the price at the start of the sowing season; the rest is deducted when the harvest is turned in. The output has to be a multiple of the seed supplied (usually 10 times). The tubers must be of a certain size and solid matter. The permissible limits for defects are specified as also the deadline beyond which the harvest will not be accepted. Parthi J Chaudhary, a police officer who doubles up as a farmer credits McCain with teaching growers here the art of potato cultivation. Before the company came, flood irrigation used to be the norm. The amount of water if stacked up would rise to a column of 750 mm says a field-level company executive. Farmers have now switched to drip or sprinkler irrigation, which not only saves water but also fertilizer and pesticides (as insects thrive in high humidity). Chaudhary, who has a reputation for extracting large yields from his 87-acre farm, says the trick is to be in sync with nature and the rhythm of the crop. He plants between 1and 10 October so that the crop can make the most of the ‘bulking’ period starting 20 December, when weather ensures that potatoes add around 1,200 kg per hectare every day. Chaudhary is not longer with McCain. He supplies Lady Rosetta to Balaji Wafers, which assures him a premium price for his fine harvest. Contract farming can have its downside. Sandip Joshi, 36, a grower and part time finance professional, of Dangiya village in Dantiwada taluk, had to opt out of contract this year, because the company told him to grow a variety different from the seed he had conserved last year. This is also the case with his neighbour Babulal Chaudhary, 36. If they had fallen in line with company policy, the seed they saved would have gone wasted. Choices sometimes are not what they seem to be. The market for processing potatoes is getting charged up with ConAgra Foods’ Lamb Weston and Simplot, another global supplier of McDonald’s entering the fray. Simplot, is putting up a processing factory in the state. Nikhil Tandon, director of its India operations is coy about the location. For the past three years the company has been

engaging with a few farmers, as it appraises the varieties that best meet its requirements. Amritbhai Patel, 44, of Iqbalgarh village is one of few on contract to the company. A B.Sc in agriculture, he has been drawn from McCain by the incentive of twenty paise a kg which the company gives beyond the base price of Rs 8.50 a kg when output exceeds eleven times the quantity of seed supplied. Though large buyers like PepsiCo and Balaji Wafers operate through purchase agents, Tandon’s preference is for contract farming as it ensures complete ‘traceability’ of the chemicals and fertilizers that go into the crop. Mark Heap, bio-sciences manager, at Simplot’s Australian operations is impressed with the few farmers he has worked with. ‘Production of potatoes here in Gujarat is surprisingly good considering the environment,’ he says. Though the growing season is short, ‘the specific gravity or dry matter of the potatoes is good quite good and the quality is excellent.  We are very encouraged.’ Despite McCain’s decade-long handholding, processing varieties (and contract farming) account for less than a tenth of the market. Unlike table potatoes, these do not bulk up quickly.  Their market is also limited. Until recently, under-sizes had to be sold at cut-rates but that is changing with demand from plants making flakes and powder. More processing companies mean greater choice of buyers, and better prices for farmers. But to make the crossover, traditional farmers will have to negotiate a mindset change. Until they are prepared to discipline themselves and embrace scientific practices, there will be queues every few years outside cold storages.