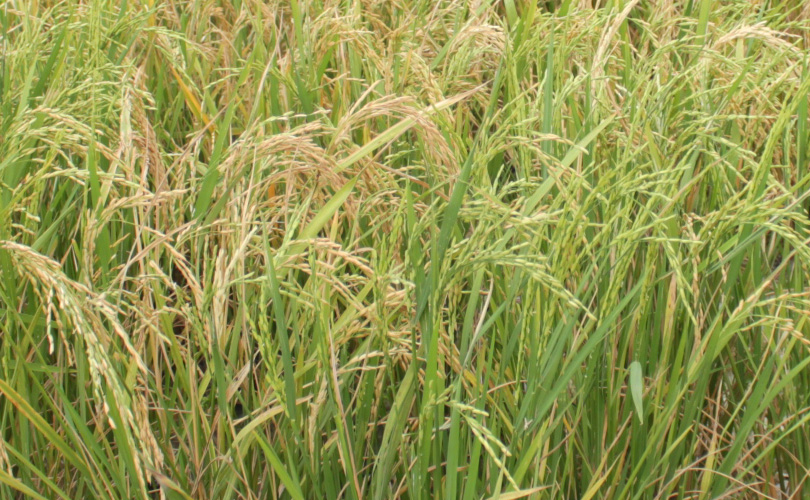 Rajendra Agricultural University at Samastipur in Bihar is the site of the original Pusa Institute, as the Indian Agricultural Research Institute in Delhi is known. Vivian Fernandes meets its chief scientist who tells the state’s rice farmers to ‘forget TPR and adopt DSR’ as a coping strategy for erratic monsoons. A version of this article was published in firstpost.com on 8 June, 2015. Link to it is given at the bottom of the page.

The weather has been acting up over the past few years with monsoons tending to be scanty and erratic. ‘In such a situation, I tell farmers to grow paddy as if it’s wheat,’ says Nitendra Kumar Singh, one of Bihar’s two chief scientists for rice. Singh teaches at Rajendra Agricultural University, Pusa, in Samastipur district, where Lord Curzon, the viceroy, established the Imperial Agricultural Research Institute in 1905. It was shifted to Delhi in 1935, following an earthquake, where it is known as the Pusa institute, after its origins.

Water-rich north Bihar is supposed to have a natural advantage in rice cultivation, and the shifting of rice from Punjab and Haryana to this part of the country was the aim of the programme called Bringing Green Revolution to Eastern India (BGREI), for which then Finance Minister Pranab Mukherjee gave Rs 400 cr in the 2010-11 budget.   He raised it to Rs 1,000 cr in 2012-13. Mukerjee said he was encouraged by the eastern states increasing paddy production by seven million tonnes in the previous kharif season.

The central government’s push would not have made much of a difference if it had not dovetailed with state government initiatives. Bihar, for instance, crafted a four-year road map in 2008, for reducing poverty through all round agricultural development, or ‘the rainbow revolution.’ The state’s second agricultural road map for the five years ending 2017 envisages an investment of Rs 1.5 lakh cr. One aspect of it was to raise the state’s rice productivity to the national average.  ‘BGREI is a very small scheme in the total gamut that we are trying to attempt,’ says Vijay Prakash, Bihar’s agricultural production commissioner.

Bihar’s sought to achieve its goal by augmenting the supply of certified (non-hybrid) seeds, encouraging use of hybrids, employment of a technique called System of Rice Intensification (SRI), and green manuring or cultivation of leguminous plants like sunn hemp specifically for ploughing into the soil to improve its fertility.

Prakash pronounces the mission a success. ‘We have caught up with the national average and we have gone a bit ahead,’ he says. Bihar’s average rice yield, according to its economic survey, has risen from 1.28 tonnes per hectare in the three years ending 2008 to 2.36 tonnes in the 2011-14 triennium. India’s average for the latter period was 2.46 tonnes.

While production of rice has increased considerably, uncertain monsoons have resulted in acreage under rice fluctuating. Between the three years periods ending 2008-09 and 2013-14, area under rice fell by ten percent. The government is encouraging cultivation of millets, which is not a durable alternative as they do not mesh with the dietary habits of the people. Kumar believes farmers will return to rice, if the shortage of labour and water are addressed. He is propagating Direct Seeded Rice (DSR).

SRI is a labour intensive method adopted from Madagascar. The seedlings are first raised in nurseries. They are re-planted manually, when eight to 12 days old, with 25 cm spacing between plants and rows. The space between the rows is puddled with a machine for water to stay. De-weeding is done with a hand-operated machine. The field is alternately irrigated and dried.

‘Our finding says that under SRI yield advantage is higher by 10-15 percent over conventional paddy growing, and five to seven percent over DSR, but labour requirement and input requirement is high so net return in SRI is less compared to DSR and conventionally transplanted rice,’ says Raj Kumar Jat, an agronomist at the Borlaug Institute of South Asia in Samastipur. The institute had done a two year comparative study of the three techniques of rice cultivation.

Though the shortage of agricultural labour is not as acute in Bihar as in states like Gujarat or Maharashtra, few people volunteer for tedious transplanting. Mnrega, the government’s rural jobs scheme, is also an attractive option.

‘Initially there was a very good response to SRI,‘ says Prakash. But ‘labour becoming quite costly it is not picking up the way it should have.’ He says SRI is an important component of the mission to raise rice productivity, ‘but we are also looking into other types of inputs, like direct seeded rice.’

SRI is a touchy issue. Chief Minister Nitish Kumar has been backing it.

Direct seeding is not unknown in this part of the country. Till around the middle of the last century, Bihar farmers used to sow a mix of green gram (moong), sesame (til) and rice seeds. That was a strategy for ‘baad ke prakop se bachhne ke liye’ (coping with the fury of floods), Kumar says.  Now it is meant to cope with the fury of droughts.  The problem of weeds has been taken care of by low cost herbicides that are both selective and effective.

‘Even my dreams are those of DSR, says Kumar. His aim is to get a third of Bihar’s rice acreage under direct seeded rice over the next five years. Bihar grows rice on about 33 lakh ha.

Will he be able to achieve it?

‘Maa Bhagwati ke kripa se,’ (by the grace of Maa Bhagwati) replies the rice breeder, who has developed ten varieties, including Rajendra Bhagwati in 2010, a long-grained scented variety.