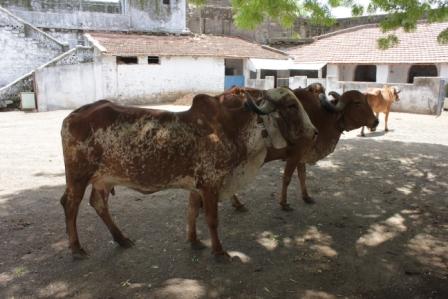 Not only are the  government’s targets to raise milk production by 80 percent and treble dairy farmers’ income by 2022-23 based on unrealistic assumptions, its unscientific ideological biases could undermine India’s position as the world’s No. 1 milk producer.

Raising production to 300 million tonnes, up 80 percent over the 2015-16 output would require annual growth of 9.04 percent ─ way above the average of 4.53 percent annual growth observed over the past 16 years, Harish Damodaran, the Indian Express’s Rural Affairs Editor writes.

The agriculture ministry projects the population of milk-giving cattle and buffaloes to rise by 32 percent by that time. There is not enough fodder and water to go around. Ideally, the less productive heads should be culled, but it clashes with the love of the cow, which the government encourages.  The high yields achieved by Israel and the US are the result of improvements in breeding, scientific management of animals and selective culling.

In India cattle cannot be slaughtered except in a few states and the fear of gau rakshaks or cow vigilantes has made transport of cattle for trading in animal markets, a risky, even lethal affair.

To treble the monthly income of dairy farmers from Rs 516  now to Rs 1,697 in 2023-24─ that’s how meagre rural incomes are ─ the price they get will have to rise from Rs 32.19 per litre now to Rs 47.56 and retail prices will have to go up from Rs 46 to Rs 67.96.  But can this happen when 300 million tonnes is produced against a demand of 274 million tonnes? Can India export, when global prices of milk power are much more competitive?

Far from expanding, output might even shrink if the agriculture ministry glorifies and promotes indigenous breeds for ideological reasons at the cost of crossbreds, writes Narayan G Hegde, Trustee of BAIF Development Research Foundation.

Hegde says of 37 recognized native breeds of cattle, only four ─ Gir, Red Sindhi, Sahiwal and Tharparkar─ yield around 1,500 kg of milk per lactation. Another seven are meant for both dairying and draught purposes. Their yield is between 800-1,200 kg per lactation. The rest are primarily draught breeds, reared for producing bullocks and their yield is less than 800 kg. With increasing mechanization, farmers prefer cows crossed with bulls of high-yielding breeds. They do not much care for conservation of native breeds. This is happening with buffaloes too. Breeds like Banni, Surti, Pandharpuri and Bhadawari are crossed with Murrah bulls to produce superior calves.

The 113 million nondescript cattle are neglected owing to low yield, Hegde says. They do not have any specific breed characteristics. Improving their genetics by crossing them with Indian dairy breeds has not been successful. Farmers have preferred crosses with European breeds like Jersey and Holstein Friesian. This programme began in the 1970s. Even nondescripts crossed with European breeds yield 2000-2,500 kg per lactation. This is one of the reasons for the success of India’s dairy industry. They have boosted India’s milk production seven-fold from 23.3 million tonnes in 1973-74 to 155.5 million tonnes in 2015-16.

Hegde says several lobbies with little stake in cattle rearing are undermining crossbreds for their susceptibility to diseases and heat. They are pressurising the government to discourage crossbreeding. Native cattle are glorified. Medicinal and plant protection claims are made for their urine without any scientific basis.

False publicity has been created about the harmful effects of A-1 type milk.  The agriculture ministry has even published reports about the A1 milk of crossbreds causing diabetes and heart disease. The A2 milk of native breeds is wrongly claimed to be superior. The agriculture ministry has even released a poster making such claims. This can create confusion in the minds of farmers.  The benefits of crossbreeding has been demonstrated by BAIF Development Research Foundation, a Gandhian organisation which has provided doorstep breeding services and other support to 40 lakh families in 15 states, Hedge says. If farmers want high-yielding indigenous cows they can cross they with elite Indian elite breeds. This is the strategy that Brazil adopted to improve the yield of imported Indian Gir cows. This has helped that country to increase their milk yield to 6,000-8,000 kg per year.

By crossing nondescript cattle with European breeds Indian farmers get 2,000 kg or more milk per year. A rural family can make a decent living with three such animals.

Hegde’s advice: If the government must promote native breeds, its approach should be science-based and definitely not at the cost of the farmer

(Top photo of Gir cattle at the farm of Raghavendra Sinhji Jadeja, scion of one of the erstwhile princely states of Saurashtra. This one from village Bhadwa, Gondal taluka, Rajkot district. Photo by Vivian Fernandes).