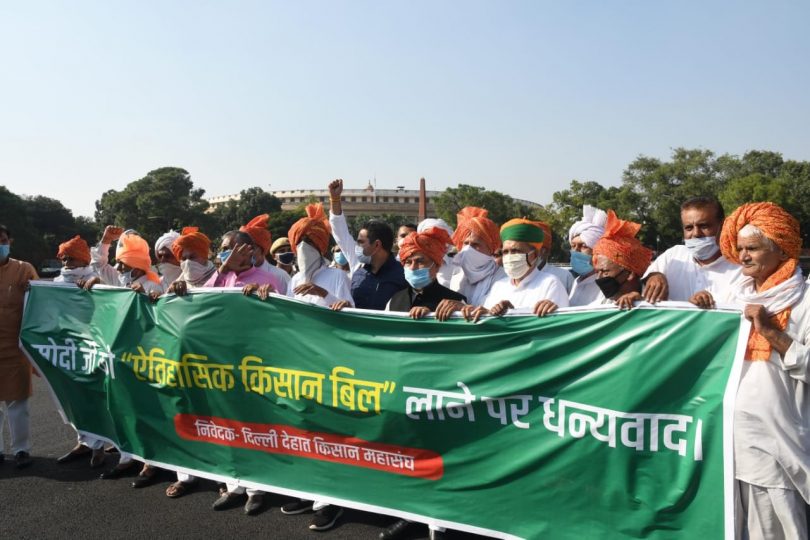 The three farm bills on agri-trading, contract farming and stockholding which Parliament passed earlier this month will help farmers. However, promulgation of the ordinances in June under the cover of the Covid-19 pandemic has not helped. Their hurried ratification without giving enough time to Opposition MPs to debate the bills, or dismissing their demand for examination of the bills by standing committees have made the legislations seem like reform by stealth, reports Vivian Fernandes.

Agricultural marketing is a state subject. Regulated market yards were set up since the 1960s under the agricultural produce marketing (APM) acts.. The current amendments draws upon the centre’s power under the Concurrent List to regulate trade and commerce in foodstuffs, cooking oils and oilseeds, raw and ginned cotton, cattle feed and raw jute.

The need for reforms has been felt for long. The centre drafted model legislations for the states to enact in 2003 and 2017.  Most states complied, but inserted undermining caveats. Sharad Pawar, agriculture Minister in the Manmohan Singh government, therefore, set up a committee of state agricultural marketing ministers in 2010 to give advice on how agricultural trading could be freed up. Maharashtra’s cooperation minister Harshvardhan Patil chaired it (He quit the Congress Party in 2019 to join the BJP). So the reforms had multi-party support.

In its report in January 2013, the committee noted that the regulated markets have become barriers to agricultural trade as commission agents must own shop or godowns in them to get a license. Many of these market yards don’t have space to expand. The issue of new licenses is restricted, discouraged or banned. Traders and commission agents organize themselves into associations and don’t allow new entrants, the committee said.

States have treated these markets as a source of revenue. The commission agents or arhatiyas also earn fat commissions. They enjoy political clout. In November 2018, Maharashtra’s Devendra Fadnavis government withdrew a bill to ratify an ordinance liberalising agri-trading in the state from the lower house, a day after it was approved in the upper house. Traders in the state’s major regulated markets had mounted pressure by going on strike in protest against the bill.

The central law creates two trading jurisdictions in the country. Earlier, a regulated market’s ambit covered a ‘notified area,’ which could be a block or a district. Cesses and fees were payable on agri-produce traded in the area, even outside the market yards.

These charges were steep. The Commission on Agricultural Costs and Prices (CACP), which fixes minimum support prices (MSP) for 23 commodities said in 2016, Punjab was charging 14.50 percent, AP 13.13 percent, Haryana 11.50 percent and MP 9.70 percent on procured rice. This increased the procurement cost of the centre by Rs 91 to Rs 213 per quintal. Since rice is sold in ration shops to the poor at a fixed price of Rs 3 a kg, the cesses and fees raised the centre’s food subsidy bill.

Punjab’s 8.5 percent levy includes mandi cess and rural development fee (3 percentage points each) and arhatiya commission of 2.5 percent. Last year, the state earned Rs 3,623 cr through the former. Its 36,000 commission agents, most of them active, earned Rs 1,611 cr as commission, Laal Singh, Chairman of the state’s mandi board said.

The cigarette company, ITC, which sells wheat flour under the Ashirvaad brand, had to pay the 6 percent charge on produce it procured at its Karpurthala centre even though it was not using the infrastructure of the regulated markets.

Under the new central law, these charges will be payable only within the regulated market yard and not outside. This will reduce the transaction cost.

The protests that one sees mostly in Punjab and Haryana reflect the arhatiyas’ anxiety about loss of earnings. Farmers have joined them, perhaps because they fear that mandis will fall into disrepair if a sizeable chunk of trade moves out of them. The mandis are inclusive spaces where farmers, big or small, can find buyers for their produce. They may not get the best price, but a sale is assured. Private buyers (organised retailers or food processors) will buy only what they want in the desired quantities and as per their quality norms.

But the mandis can stay relevant by reducing charges and offering services like assaying and grading facilities which most of them don’t have. If the mandis can get the grades certified, a trader, say in Delhi, can participate in an auction, say, in Sehore. The trader does not have to be physically present in Sehore. A larger choice of buyers means better prices for farmers.

At the mandis produce from various farmers is aggregated and sold as fair, average quality (FAQ). There is no premium on quality.

This is set to change with private buyers who have supply chains linking them to the consumers. They will value produce for characteristics which retail consumers prefer (Sharbati wheat or oblong potatoes with low sugar for French fries) and pay a premium for it. But large buyers might still prefer to operate though the mandis. The arhatiyas have the wherewithal to aggregate the produce of hundreds of smallholder farmers. They have workers on their rolls, drying yards, storage spaces and intricate knowledge of the market. The market yards also have dispute settlement mechanisms. Unlike a trader outside the mandis, a licensed arhatiya cannot default without the threat of penalties.

If the central legislations bring in more competition, farmers will gain.

But farmers in Punjab and Haryana who sell their produce to the central government at MSP are sceptical of its motives. They have seen how it has bent the rules to benefit cronies. The farmers in these two states think that the government will shift procurement of rice and wheat outside the mandis to avoid high charges. Over time, it might reduce the quantity procured as well.

Punjab’s eight lakh farmers sell wheat to the government at assured prices. They account for more than 80 percent of the state’s wheat growers, through their share is 3 percent nationally. In Haryana, nine lakh farmers sold wheat at MSP to the government last year, up from 4.7 lakh in 2016-17.  As procurement operations are extended to other states and more of their farmers are covered Punjab and Haryana farmers will be squeezed out. In Uttar Pradesh, the largest producer of wheat, the number of farmers covered by procurement operations has increased 4.5 times from 1.66 lakh to 7.5 lakh over four years, yet only seven percent of them are covered. In Rajasthan, the number has increased by 2.5 times to one lakh farmers, but they are just four percent of the state’s wheat growers.

It may be unfair to blame the states for taxing agricultural trade. They have very few sources of revenue. The centre has not inspired trust by reneging on its promise to compensate states for the shortfall in their share of GST due to the pandemic-induced economic slump. Charges like rural development fee cannot be seen as arbitrary impositions. Punjab could not have set up a network of 153 principal yards, 284 sub-yards and 1,443 purchase centres and invested in rural roads to make them accessible without revenue from agricultural trading. The rural development fee must be seen as a user charge.

The prime minister obliquely referred to the arhatiyas as “powerful gangs.” But farmers depend on them for credit when banks refuse and for farm inputs against delayed payments. The arhatiyas force the farmers to sell soon after harvest when prices are low. It is an asymmetrical relationship of dependence forced by necessity.

The central legislations give farmers a choice of buyers and liberation from high charges. But farmers are wary because they suspect the government’s reformist credentials. It has not given markets a free hand despite the promise of ‘minimum government and maximum governance.’ Rules are changed on whim. That doesn’t inspire trust.