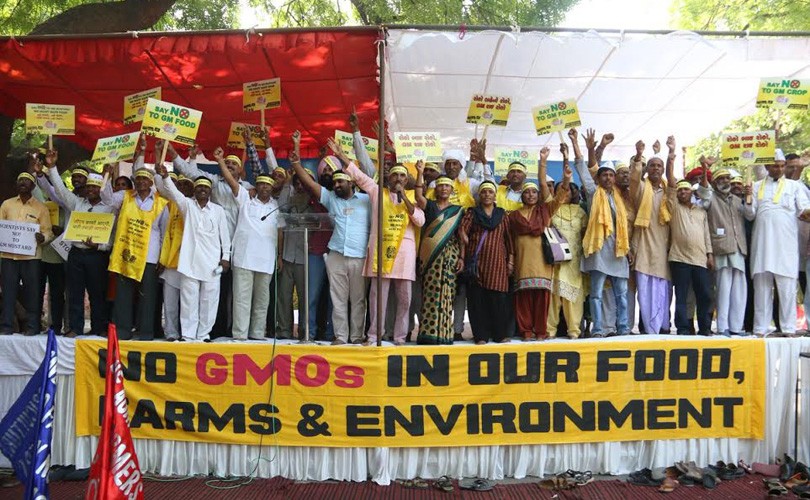 The government has taken a strong stand in its response to a petition in the Supreme Court seeking prohibition of the commercial release of genetically-engineered mustard hybrid DMH-11. It says the regulatory process has not been completed so the opposers cannot seek relief as their rights have not been violated. In the affidavit, it says the activists are ideologically motivated and are economical with facts, reports Vivian Fernandes.

The government has asked the Supreme Court to “dismiss with exemplary costs” the petition filed by Aruna Rodrigues through her lawyer Prashant Bhushan seeking prohibition of open field trials and the release for commercial cultivation of genetically-engineered (GE) mustard hybrid, DMH-11, developed by a team of Delhi University scientists.

Calling them “strongly motivated” ideologically against genetic modification (GM) crop technology, it has charged them with seeking to “derail  and hijack” the regulatory process and and “propagating unscientific methods and practices with no evidence of their performance.”

By seeking an independent review of the bio-safety dossier presented by the developers of GE mustard which is awaiting regulatory approval, the governments says the petitioners are undermining the credibility of the Indian scientific community and demeaning the regulatory process.

Agricultural priorities and the technologies to be deployed should be the concern of the agriculture ministry and national institutions engaged in research, development and extension. It should not be “dictated by a fringe of petitioners with ideological rather than scientific interest.”

It terms as a “blatant lie” the contention of the opposers that the same gene constructs have been used in DMH-11 as were employed in a GE mustard hybrid submitted for approval by Proagro Seed Company (later acquired by Bayer) to the Genetic Engineering Appraisal Committee (GEAC) earlier. The government says the transgenes – barnase, barstar and bar – are the same, but the constructs are different, as attested by scientific papers which the developers have published and the patents they have secured.

The government says the petitioners have “misinformed” the court that GEAC had turned down Proagro’s  application (around 2004) over bio-safety concerns. The company had withdrawn the application on its own for business policy reasons after some ministries had sought time to study and analyze the data it had submitted. The minutes of the 34th meeting of the GEAC have recorded that the hybrid had given a yield increase of 16-23 percent in field trials.

The government accuses the petitioners of “willfully making confusing statements” about DMH-11. While they have stated in some places that it is an attempt to sneak in herbicide-tolerant mustard through the backdoor, elsewhere in the petition they “correctly state” that the barnase-barstar system is to facilitate the making of hybrids through pollination control as mustard is largely a self-pollinating crop.

The environment ministry says the petitioners are “hell-bent on distorting the herbicide-tolerant status” of parental lines Varuna bn3.6 and EH-2 modbs 2.99 and the resultant hybrid. While the presence of the bar gene makes them tolerant to the herbicide Basta (phospinothricin), there is no proposal to use it in farmers’ fields.  It will be used only in hybrid seed production plots, as markers to select GM plants from non-GM ones.

The ministry says the petitioners are making “misleading” statements when they assert that DMH-11 has no trait for yield increase. The Delhi University scientists have not claimed that the barnase-barstar system increases yield. It is meant for pollination control and production of hybrids by making one parental line male sterile (using the barnase gene) so it can be fertilized with the pollen of another line, and the resultant seeds are made fully fertile (by using the fertility restorer barstar gene).   Increased yields will be on account of hybrid vigour and depend on the parental lines that have been crossed.

The government says the barnase-barstar system is a more efficient and versatile system for hybrid seed production. DMH-11 has reported an yield increase. Higher yielding GM mustard hybrids can be produced by back-crossing more productive lines.

It cites the example of Canada which allowed use of the barnase-barstar method in 1996. Currently 85 percent of Canadian rapeseed, a sister crop of Indian oilseed mustard, also called canola, is hybrid. Using the technology, Canada released the first hybrid in 1998. It showed a yield increase of 13 percent over Canadian rapeseed mega variety Westar.  In 2008, another hybrid with 46 percent yield advantage over Westar was released.

The government accuses Rodrigues of “peddling the bizarre conspiracy theory” that DMH-11 is a ploy to benefit Bayer, which sells the herbicide phosphinothricin under the brand name Basta. It says Bayer’s patent on the molecule has lapsed. Two Indian companies are producing the herbicide and exporting it, so Bayer has no monopoly. There are no safety issues with the herbicide either. It has been used worldwide since 1970.

It challenges the petitioners contention that herbicide will be prohibited in the European Union from next year.  The agro-chemical, like others, the government says, is due for review in 2018, suggesting that this is a routine process.

The government in its response asserts that the biosafety data on DMH-11 shows it presents no danger to human or animal health. The transgenes used have been derived from non-pathogenic  bacteria which are abundantly present in soil.  It says India’s regulatory process compares with the best in the world and lists how the rules, guidelines and protocols have been upgraded from time to time.

The environment ministry justifies not putting the full dossier of 3,285 pages on the website as demanded by the opposers. It says the Catagena Protocol on Biosafety itself says all the information need not be disclosed as it could compromise the developers’ intellectual property rights and the data could be used by rivals. The summary put out on the website is sufficient for the public to make an informed judgement. The ministry says it has exceeded global best practice requirements, by inviting the public to see the full dossier without any part being redacted at the GEAC’s premises in Delhi. Twenty-nine persons, including those from outside Delhi, have seen it, it says.

It rejects the charge that the trials of DMH-11 were not independently conducted and refutes the contention of the director of the Directorate of Rapeseed-Mustard Research, Bharatpur, (cited by the petitioners) that the directorate merely acted as a post office.

The government says the petitioners have cherry-picked the October 2012 interim report of the Technical Expert Committee (TEC) set up by the Supreme Court to review the regulatory mechanism for GM crops and the conduct of GM field trials.

After examining that report the government had submitted to the Supreme Court that the report “was scientifically flawed, did not  address the ToRs  (terms of reference) and had not only exceeded the mandate assigned to TEC but is also outside the scope of the writ petition itself and therefore merited outright rejection.”

In view of the objections the court had appointed RS Paroda, the former Director-General of the Indian Council of Agricultural Research to the TEC.  Nine months after his induction, the government realized that the TEC had given two reports, one of five-members and Paroda’s dissenting report. The court has yet to form a view on them, but the petitioners, the government says, have drawn conclusions based on the “flawed” report of the five-member committee.

The government says GM technology is needed for hybrid mustard production because non-GM technology has not proved to be versatile or stable under extreme cold conditions prevailing in the mustard-growing regions of north India. It says mustard is grown on about 6 million hectares but yield is stagnating despite 79 percent seed replacement by farmers, and 75 percent of area under the crop being irrigated.

The government is committed to “increase farm productivity, incomes of farmers through development of low input high-output agriculture and make the country self-sufficient in edible oil and grain legumes.” At the same time it is concerned about safety  and there is a legal regime in place to take care of food and environmental safety.

The government avers that in 2015-16, India imported Rs 68,000 cr worth of edible oil. Ideally this should have gone to  Indian farmers. Strengthening of plant breeding programmes including use of new genetic engineering technology is critical for meeting the emerging challenges of Indian agriculture