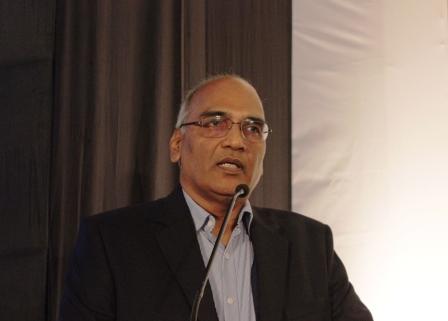 Investments of Rs 12,000 cr in crop biotechnology made by India’s public and private sectors in India are wasting away as governments at the centre and the states give in to pressures from ideologically-motivated groups which have spread false fears about safety, says Ram Kaundinya, Director-General of the Association of Biotech-led Enterprises (ABLE-AG). He was speaking at the national conference on agri-biotechnology held in Delhi in the last week of November, 2014.

There is not enough support from the government for biotechnology, which is the key to India’s food security. Nor are the relevant central and state policies aligned. This is hurting the biotech industry which, along with the government, had made huge investments in it.  But ‘it is hurting farmers the most,’ said Ram Kaundinya, chairman of the agriculture focus group of the Association of Biotech-led Enterprises (ABLE-AG). He was speaking at the fourth national conference on agri-biotechnology in Delhi in the last week of November, 2014.

Kaundinya held cotton as an example of the possibilities for other crops from biotechnology. Following the introduction of boll worm resistant, genetically-engineered Bt cotton in 2002, the country’s cotton production increased three-and-a-half times from 9.5 million bales (of 170 kg) in 2000-01 to 34.2 million bales in 2012-13. Exports rose from 30,200 tonnes to a little over two million tonnes during this period. In the ten years to 2012, cotton yield rose nearly seventy percent to 510 kg a hectare. Sprays to kill boll worms fell by half or 20,000 tonnes. Cotton farmers earned Rs 41,500 cr additional income between 2002 and 2010, and the extra income per hectare was Rs 8,000. Is it any surprise that 6.3 million farmers chose to plant Bt cotton on 90 percent of India’s cotton acres? Kaundinya asked.

Yet, no new biotech innovation has been introduced in agriculture since 2002 because of unfounded fears about their safety and regulatory paralysis. The Indian Agricultural Research Institute has been unable to commercially release local varieties of vitamin-A enhanced golden rice. Biotechnology can make edible oils healthy by modifying their fatty acid profile and also render maize more nutritious for farmers, yet states like Rajasthan have not stopped trials of indigenously developed Bt mustard.  ‘Biotechnology is not the only technology,’ Kaundinya said, ‘but it is the most important.’

He contrasted the 4.38 percent compounded annual growth rate of cotton production between 1991 and 2007 with anaemic rates of growth in wheat (1.18 percent), rice (1.4 percent), soyabean (0.60 percent) and sugarcane (0.19 percent). The country’s demand for food will double by 2020. Food habits are changing. Less cereals and more eggs, fish, milk and meat are being consumed. Every kilogram of meat requires five kilograms of feed. Edible oil demand will double to 34 million tonnes. Their imports will rise from 8.3 million tonnes now to 19 million tonnes by 2030 if it is business as usual. There will be a similar increase in the demand and import of pulses as well.

Farmers are not looking for subsidies, Kaundinya said. They are willing to pay, he said, and cited Gujarat farmers,  who have accepted higher rates as the price for regular supply of powers for a few hours every day.   Kaundinya wanted the private agricultural extension system to be encouraged as it was in the interest of corporates to hand hold farmers in new agricultural technologies and practices.

The biotech industry needs a conducive and predictable policy environment so it can make investments.  Laws relating to seeds, biotechnology regulation and the protection of biodiversity must be aligned.  The biodiversity Act puts restrictions on the use of biological resources by private companies or those with foreign shareholding or management.

Kaundinya wanted the agricultural biotech industry to assume ‘technology stewardship,’ by which he meant promoting the responsible use of biotechnology, educating farmers about safety protocols and ensuring they understand its limitations. He sought a dialogue with civil society groups so that blind opposition is whittled down to reasoned disagreement.

It is ironic that biotechnology which can address climate change concerns cannot itself find a salubrious climate in India for its extensive adoption.