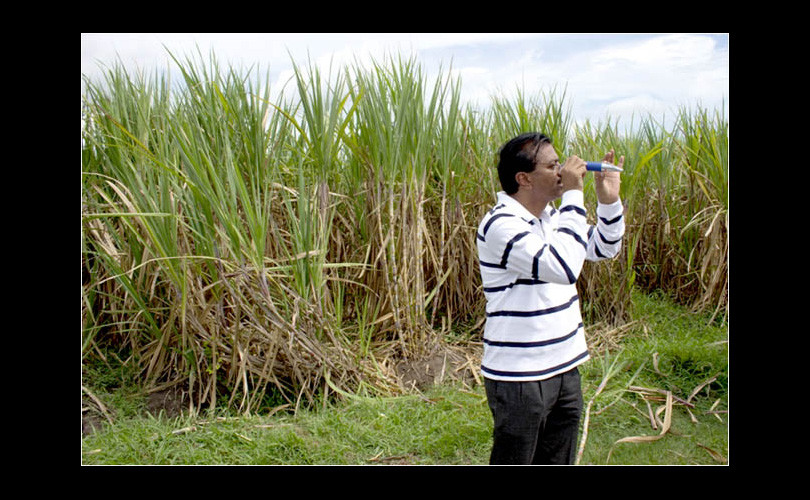 Sugar scientists visit Indonesia to study its GM sugarcane technology because the ones developed in India cannot be evaluated because they have not got approval for field trials, reports Vivian Fernandes.

A team of agricultural scientists and sugar industry leaders which visited Indonesia to evaluate its recently approved genetically-modified drought-tolerant sugarcane for suitability to India is speaking in different voices.

While Shivajirao Deshmukh, Director-General of Pune’s Vasantdata Sugar Institute (VSI) said the ‘team noticed that this GM sugarcane crop appears drought resistant and the sugar content is also good,’ Bakshi Ram, Director of the Indian Council of Agricultural Research’s Sugarcane Breeding Institute, Coimbatore, says they could not make a comparison as they were only shown the GM crop (Event NXI- 4T) and not the parent or control variety, BL-19. The Indonesian scientists also ‘did not share comparative data for yield and juice quality nor the month-wise rainfall pattern,’ Ram told this website.

Ram was part of the team. Deshmukh was not, but he shared the views of his institute’s delegates. These included four governing council members, cane breeder R S Hapase and molecular biologist Harinath Babu.  K Mohan Naidu, a board member of Coimbatore’s Rajshree Sugars & Chemicals also joined in.

The visit happened in the second week of December. It was facilitated by Bhagirath Choudhary, a founder of Delhi-based South Asia Biotechnology Centre.  Choudhary says he is interested in India and Indonesia collaborating on GM sugarcane, as Indonesia is a sugar importer while India is an exporter. Cane grown in parts of Maharashtra ─ Marathwada, for instance ─ has to cope with deficient rainfall. This explains VSI’s interest in the crop. Former agriculture minister, and GM technology supporter, Sharad Pawar was also keen for the same reason. He is chairman of the institute.

A three-member VSI team has visited Indonesia in September when the crop was eight months old. It observed that the crop was ‘green compared to the traditional (that is, non-GM) crop though there was no rainfall or irrigation for four months,’ Deshmukh said.

Drought tolerance does not mean the cane can grow in bone dry conditions. It can cope with an absence of rainfall for about thirty to forty days ─ nothing to be scoffed at now that weather has turned quite erratic.

The coping mechanism has been creating by inserting the bet A gene from the agrobacterium, rhizobium meliloti, which encodes for an enzyme called choline dehydrogenase. This, in turn, is a precursor of the protein glycine betaine that helps maintain fluid levels within cells and enables plants to cope with prolonged dry spells, Choudhary explained.

The gene was isolated by Japan’s food flavourings company Ajinomoto, which is better known for monosodium glutamate or MSG by that name. Other collaborators were: Indonesia’s plantation and sugar company PT Perkebunan Nusantara (PTPN XI), Indonesia’s Sugarcane Plantation Research Center (P3GI) and the Centre for Development of Advanced Science and Technology (CDAST), State University of Jember, East Java.

The GM cane has been approved for commercial cultivation and is being grown on 100 hectares, Bambang Sugiharto, a scientist on the project said in a telephone conversation. It was approved in May 2013 by the National Genetically Modified Product Biosafety Commission (KKHPRG) after clearing food and environmental safety tests. It was Indonesia’s first GM crop to be approved.

‘We have got the certificate for variety release… from Indonesia’s Ministry of Agriculture,’ Bambang said. It has to undergo assessment for animal feed safety. This could not be done so far because the office for feed safety assessment had not been established. Now that the office has been set up, evaluation of data for feed safety is expected to be done in January 2016.

The GM sugarcane has 8.47 percent sugar content compared to 7.83 percent in non-GM sugarcane, Bambang says in a presentation which is available on the Internet. The yield respectively was 4.59 tonnes per ha and 4.06 tonnes per ha, he adds. His team has also created high sucrose sugarcane by stacking two genes. But these have not been incorporated in the drought-tolerant GM sugarcane.

Ram says he got the impression that CDAST did not own the technology as it said it would have to consult Ajinomoto about transferring the gene to Indian varieties.

Ram believes India should genetically-modify its own varieties for desirable traits. The Sugarcane Breeding Institute, he says, has developed 18 events of Co 86032, a cane variety popular in south India. But it has not obtained permission for field trials from the Review Committee on Genetic Manipulation, in the Department of Biotechnology ‘Our application is pending for more than a year,’ he said.

(Top photo: At the drought-tolerant sugarcane plot in Indonesia)

Your comments are solicited. You may post them in the ‘comments’ box or email them to smartindianagriculture@gmail.com