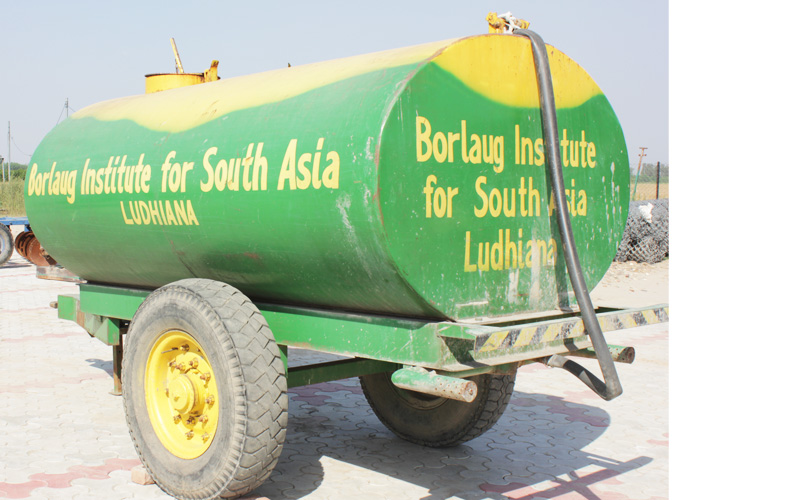 Punjab has 4.25 lakh tractors or one for every ten cultivated hectares. But the Borlaug Institute says using them to churn the earth is wasteful. It not only recommends zero-till agriculture but practices it on its 500-acre farm in Ludhiana, reports Vivian Fernandes, after a visit in April, 2015. This article was first published in www.firstpost.com on 9 May.

At the 500-acre campus of the Borlaug Institute for South Asia (BISA), just a little distance from the River Sutlej at Rajowal near Ludhiana, agricultural machinery and equipment are neatly parked within an enclosure like in a military garrison.

The laser leveller, the combine harvester and the direct seeder have pride of place here. The tractor, which symbolises Punjab’s highly mechanized agriculture, has suffered a loss of status. It is a provider of locomotion and motive power; there is no purchase for its chief function as an earth mover. And the soil-churning rotavator is an outcast.

Tilling the fields here is akin to saying the Black Mass at the Vatican. Tillage leads to loss of moisture and disturbs good bugs like earthworms. It disrupts water-conducting capillaries formed in soil when roots rot. Conservation agriculture borrows from nature. It is minimally invasive — the equivalent of using endoscopy in surgical operations. If forests do not need ploughing for plants and trees to grow why should crops?for its chief function as an earth mover.  And the soil-churning rotavator is an outcast.

Conservation agriculture is the reigning creed at this experimental farm set up in December 2011, jointly by the Indian Council of Agricultural Research and the Mexico-based International Wheat and Maize Improvement Centre, known as CIMMYT, after its Spanish initials, where plant breeder Norman Ernest Borlaug, the ‘father of the green revolution,’ developed dwarf varieties of wheat and those resistant to rust, a destructive plant pest.

The other two tenets are retention of previous crop residue in the field and interrupting the wheat-rice cycle of the Indo-Gangetic plains with a leguminous crop to fix nitrogen in the soil. The approach is that of a farmer for whom overall annual and long-term profitability matters more than the yield and gain from individual crops. The accent is on frugal use of resources. Leaving residue behind prevents evaporation and growth of weeds. It improves soil health.  An acre of rice straw adds 30 kg of nitrogen, six kg of phosphorous and 11 kg of Sulphur, says Pankaj Singh, BISA’s farm manager.

We are recommending it in a big way. It is the way forward,’ says H S Gupta, Director-General of BISA. ‘The Indo-Gangetic Plains must adopt it immediately,’ he adds because there has been ‘intensive mining of nutrients and no replenishment’ over the past fifty years of the green revolution. But farmers will have to be first convinced, for which a big campaign is needed. They must be shown the farms so they can believe.

Conservation agriculture is still to take off. According to the Food and Agriculture Organization, Brazil has nearly 32 million ha under it, Argentina 29 million and Australia nearly 18 million. It is catching on in the US as well. An aggressive evangeliser of conservation agriculture is Harminder Singh Sidhu, the burly and gregarious in-charge of the institute at Ludhiana (the other two

are in Jabalpur in Madhya Pradesh and Samastipur in Bihar).  An engineer by training, for seventeen years he was Professor of farm mechanization at Punjab Agricultural University’s college of agricultural engineering , till he moved to CIMMYT in 2009. ‘For the past three years we have been practising conservation agriculture here,’ says Sidhu and ‘in eighty percent of our farms there is no tilling or residue burning.’

Since rice harvesting happens in winter, we watch a video of the previous season. We see a combine mowing paddy, threshing the grain and spreading hay evenly behind, while two attached seeders sow wheat in neat rows by slightly parting the straw. Because rice hay has silica it is not used as fodder in this part of the country. It is burnt in Punjab, Haryana and Western Uttar Pradesh despite a ban, a practice that has been indicted for eye-stinging pollution in the countryside and possibly the formation of atmospheric brown cloud from the resulting soot.  The moisture in the rice field at the time of harvesting is sufficient for wheat to germinate. The timed saved in preparing the field, allows wheat to make the best of peak growth period in winter, and add about half a tonne per hectare (a tad less than 2.5 acres) by avoiding the days of terminal heat. ‘Conservation agriculture is good in good year and very good in bad years when temperature shoots up.  This is a natural way of adapting to climate change. Yields will be the same or more,’ asserts Sidhu.

The state’s economic survey says zero tillage cultivation saves Rs 3,600 in diesel cost (when prices were higher than now) and 10 lakh litres of water per hectares (2.5 acres). Sustainable intensification is another term we hear.  Parvinder Singh, a a soil scientist, shows us a field of wheat turned golden and ready for harvesting in the April heat with 20-day moong beans between the rows. By the time the monsoon arrives and sets the stage for sowing rice, the moong would have been harvested – a low-cost opportunistic leguminous crop.

Moong between standing wheat at Bisa farm in Ludhiana on 24 April, 2015.

Another video shows wheat being sown between rows of cotton with a seeder attached to an improvised high-wheeled ‘camel’ tractor straddling the plants. The cotton crop irrigated before its fourth and last picking makes the bed just right for the wheat to spring to life.  It is quite a break from ‘clean slate’ agriculture where crops took turns to grow without intruding on each other’s space.  Here there is much mingling as in nature.

If farms are not tilled, don’t they get hard from the movement of machines? Are not deep chisellers employed to break the hard pan that is formed below the surface so plants can access the nutrients below? Sidhu says it is not machinery but puddling the rice paddies for retention of stagnant water that causes the pan to form (preventing recharge of aquifers). When fields are not ploughed, roots make the soil porous. The wheat root is a metre long and the rice root grows to 80 cm.

The state economic survey says in 2001 just 750 ha was under zero tillage. Ten years later, it was over 7.49 lakh ha. That is 18 percent of Punjab’s 41.55lakh ha cultivated land. But a big change in mindset in a state which believes in ‘Dab ke waa aur raj ke khaa’ (Plough hard and eat well).