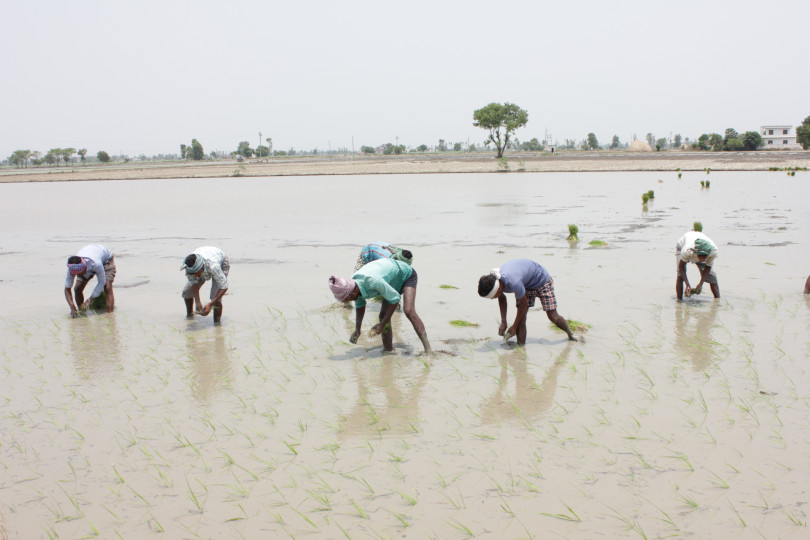 Ashok Kumar Singh is head of genetics at the Indian Agricultural Research Institute. He has been involved in the development of basmati varieties like Pusa 1121 and Pusa 1509 which have earned the country billions of dollars in export income. In a conversation with Vivian Fernandes, Singh says IARI is working on disease resistance in rice using conventional methods but is not averse to using genetic modification, if there is no option.

Over the next four years, Indian Agricultural Research Institute intends to make its rice  varieties resistant to diseases with traits found within the species but can resort to genetic modification to incorporate foreign genes that can confer immunity where necessary, says A K Singh, the Head of Genetics.

Rice is a rich repository of resistant genes. No less than 104 have immunity to blast and thirty-nine can fight bacterial blight. ‘We can transfer those genes into our varieties and make them resistant,’ says Singh, who joined IARI as a rice breeder in 1994 and has been involved in the development of blockbuster basmati export varieties like Pusa 1121 in 2003 and Pusa 1509 in 2014.  This will reduce the qualities of chemicals currently being used to control them.

But there is no option other than GM technology to deal with stem borers that chew panicles and turn them into what are called white ear heads or sap-sucking tiny brown plant hoppers that infest the lower stem of the rice plant and dry them up entirely or substantially within a span of two or three days. The toxic gene derived from the Bt soil bacterium that has been very effectively used against bollworms in cotton could end the predation of stem borers but opposition from various groups for various reasons has stalled adoption, says Singh.

The scientific community has been quite worked up about the political establishment giving in to this anti-science mood. Maharashtra, one of the five states, to allow field trials of GM crops, has recently suspended them. The National Academy of Agricultural Sciences, the Indian National Science Academy and the National Academy of Sciences have expressed their anxiety in a letter to the prime minister who, Singh says, ‘has very kindly responded to take pro-active action in GM crops and technologies.’

While the country has competent scientists trained in genetic modification in some of the best institutes abroad, ‘[o]ur younger generation is getting dissuaded, why we should do a science for which there is no future.’

But Singh has a more immediate concern; he is telling farmers not to give up on Pusa Basmati 1509 which traders are dissuading them from growing saying it has a tendency to break and is being rejected by consumers domestically and abroad.

The variety, released in 2013, addresses the crisis of groundwater depletion in Punjab and Haryana as it is a short-duration crop which matures in 120 days, twenty-five days earlier than Pusa Basmati 1121 released in 2003. This means six to seven fewer irrigations.  Singh, who led the research team, says wrong farming practices, and not the variety, are to blame.

Farmers plant the crop early, he says, so they can have the fields ready for the subsequent potato crop.  But 1509 should be planted as late as 15 July so that it matures in October. By then the temperature would have subsided, reducing loss of water in paddies to evaporation. The cold weather enables grain filling, proper packing of starch granules, lesser broken percentage, and the loss of aroma-giving volatile compounds.

Plant breeding is a continuous process. Though the first dwarf varieties of common rice were released in the 1960s, the first semi-dwarf variety of basmati made its debut in 1989. Called Pusa Basmati 1, it was a cross between traditional five-foot tall Indian basmati varieties and the Taiwanese Taichung Native 1 (TN 1), which had a dwarfing gene in it. It took IARI twenty years to develop that variety.

Traditional basmati varieties are prone to ‘lodging’ or bending when the grain are heavy and have an average yield of two tonnes per hectare. They also took longer -160 days – to mature. The 1121 variety yields five tonnes per hectare and matures in 145 days, while 1509 takes twenty-five fewer days to yield six to seven tonnes per ha with aromatic grains that elongate to over 20 mm upon cooking.

In 2014-15, India exported 3.7 million tonnes of basmati, worth $4.5 billion or Rs 27.589 cr. With prices falling, costs will have to be reduced so farmers stay in the money. Disease resistance, using biotech tools like marker assisted selection or genetic modification, can make research more efficient.    But GM technology will not be used on basmati varieties so as not to jeopardize their export prospects in Europe.