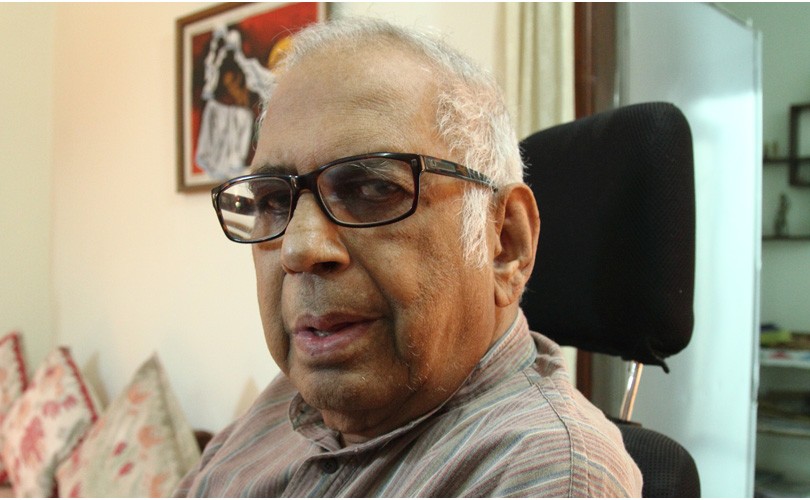 Pushpa M Bhargava has lent a voice of authority to those opposing cultivation of genetically-engineered crops in the country. He has told the Supreme Court, as one of six members of the Technical Expert Committee, that their cultivation should not be allowed. (The sixth, and lone dissenting member, is R S Paroda, a well-known agricultural scientist). Bhargava was reportedly ─ this website cannot vouch for it ─ instrumental in persuading then environment minister Jairam Ramesh to impose a moratorium on cultivation of Bt brinjal in 2010. Bhargava founded the Centre for Cellular and Molecular Biology (CCMB) in Hyderabad.  Pushing 90 ─ he was born in 1928─ and wheelchair bound, he made time to be in Delhi on 30 September to voice his opposition to GE mustard at a seminar organized by the Swadeshi Jagran Manch, an associate of the Rashtriya Swayamsevak Sangh (RSS).  Here, in an interview with Vivian Fernandes at his residence in Hyderabad, he explains his views. The interview has been edited for clarity and brevity.

VF: You are a biotechnologist. Why are you opposed to genetic engineering of crop plants?

PMB: : Firstly,  I am not a biotechnologist. I haven’t had any training in biology. I was trained as a physicist and chemist. Biotechnology is a term many of us coined in the 1960s. We were among the first to use the term “biotechnology”.  I was eventually able to persuade the government to set up CCMB (Centre for Cellular and Molecular Biology).  In the concept note that I prepared for the institute, we defined biotechnology. It was for the first time that the term biotechnology was used.  To call someone like me a biotechnologist is an insult. I am essentially what one would call a modern biologist. I haven’t had one single formal lesson in biology.  I have never learnt biology.  The world knows me as a biologist.  I never, ever said…

Okay, I stand corrected. Let’s move on. What is you stand on genetic engineering of crop plants?

s back to the mid-1960s. I was among the first, if I may say so, to say that you should put foreign genes into plant and animal cells. In the first review article in this area ─ “Progress in Nucleic Acid Research” ─ in Molecular Biology, which is one the most highly cited journals… It was a 100-page article. It reviewed 600 papers and I argued that all these 600 papers were rubbish.  Nobody had actually succeeded in putting foreign DNA.  We said let us try first to learn how to isolate a gene. Unless you learn to do that and relate it to a protein you want to put in, you will not succeed.  Our lab at CCMB was one of the first to start work on this.

When the technology was developed finally by Paul Berg, a close friend of mine, who won the Nobel Prize (in 1980 for chemistry), we were very scared. There was a meeting at Asilomar (in California, in 1975, to discuss the hazards and regulation of biotechnology) to which I was also invited but could not attend. Protocols were developed and a decision was taken that certain types of, what we now call, genetic engineering, will not be done. One of the decisions was that we will never ever put a toxic gene in any living organism.

Is that why you disapprove of Bt cotton?

Bt cotton, I did not even know. That is another amazing story…

The gene inserted in Bt cotton is derived from a soil bacterium which is toxic to bollworms. So you will not support it.

I will not approve now. At that time (i the early 1990s) I did not even know what they were doing. This whole chain of putting a lid of information started at that time.

This gene, Bt, has been in cotton and soybean, for about two decades. Are you aware of its ill-effects? We are told that there is no evidence of harm to humans, animals or the environment.

That is not true. That is simply not true. There is enormous evidence.  I will give you at least 200 papers.  This is public knowledge.  We have a book in which some of these papers have been collected. You can write to Kavita (Kuruganti, an anti-GM activist).

You are opposed to putting toxic genes in plants…

There must be a reason for putting a (foreign) gene in a plant. First there must be a need. Second, there must be no alternative.  Then you must make sure there are no ill-effects.  You must be aware of the residual risks. You must have a mechanism whereby, if the occasion arises, you can stop it.

We needed human insulin very badly. It was not available. Hundreds of thousands of people died because they did not respond to cattle insulin.  Therefore, there was a need to develop it. Today, it is available and has saved the lives of millions of people. Hepatitis B vaccine, developed in CCMB for Shanti Biotech…. We were the first ones in the country to make people aware of the technology of genetic engineering. I was responsible for setting up DBT (Department of Biotechnology). And before that, CCMB. So I am not foreign to this area.  I have never said I am against genetic engineering of plants. Knowing this as  well as anybody in the world does, in my estimate, out of 50 or 100 thousand pieces that you try, one might succeed.  It will not be viable to do it.  You try 10,000 drugs, one succeeds. It takes 15-20 years. This will take 20 years at least. If it succeeds, I have no problem. Market it, to begin with, to a limited extent. But who is going to invest in that?

By that criteria, we should not have insect-resistant Bt cotton, or GE crops with herbicide tolerance.

Bt cotton, in spite of my close association with that technology,  I didn’t even know when it was commercialized in 2002.

How can you say you were not aware?  There was brouhaha before Bt cotton was approved. Gujarat farmers planted pirated Bt cotton even before the legitimate version was approved and they dared the state government to destroy their crops.

The sequence is very different.  DBT was set up in February 1986 at my suggestion to (Prime Minister) Rajiv Gandhi.  Chittaranjan R Bhatia was the second secretary of the department (1993-96). I was offered the secretary’s post. I laid down some conditions, they were not satisfied.  Monsanto offered the government (Bt technology) for Rs 63 cr.  Bhatia wrote to me. I said this is ridiculous.  I was the chairman of the only Indian biotechnology company, Avesthagen, set up by Villoo (Morawala) Patell. I said, “Look, Avesthagen will do it for you for Rs 3 cr. Why spend Rs 63 cr?” So he brought down the price to Rs 30-32 cr. Even that I said, “If you really want Bt cotton, we will do it for Rs 3 cr”. So that idea was dropped. Bhatia went back to BARC (Babha Atomic Research Centre). Manju Sharma became the secretary of DBT and it was because of a deal between her and Monsanto, through Mahyco (an associate of Monsanto) that work started (on Bt cotton).  (Please note: This website has not verified these allegations and cannot vouch for their veracity – Ed).

Surely, one would expect that the director of CCMB, supposed to be a very prestigious institute of the country, will know what is happening? I have no idea what happened after that.

Is that why you  opposed Bt brinjal?

Absolutely, and there is no need.

What about GE mustard?

The data is unreliable. I have all the eight volumes down there (the interview happened on the fifth floor of his residence). I am the only member of GEAC to whom Deepak Pental sent all the data. (Prof Pental is a geneticist and former Vice-chancellor of Delhi University, who led the team that developed GE mustard with public money. It is currently awaiting approval for large-scale cultivation).

Let us, for the sake of argument, say that the yields for GE mustard are not as high as claimed. But it is supposed to be a more efficient technology for mustard hybridization.

How do you define efficiency?

What you are saying is partly true. But it is possible to make hybrids without the herbicide tolerance technology they have used.

The bar gene that confers herbicide tolerance is only meant to aid selection of GE mustard plants from non-GE ones. The more important genes are barnase and barstar to create male sterility for cross pollination and restoration of fertility after that event. Are you saying that the technology itself is not relevant?

You can use Deepak Pental’s technology without spraying the hybrid mustard crop with the herbicide.

You cannot have a law to that effect.   If someone tells farmers to use the herbicide because their loss will be less, why will they not use it?

The herbicide is being used in tea gardens. Would you oppose Golden Rice as well (which has a beta Carotene gene to cure vitamin A deficiency from maize).

You mean genetic engineering of plants for commercial purposes should not be allowed at all?

It is not practical.

While genetic engineering technology is useful, you believe it is not practical.

In plants. It has fantastic use in drugs. Three of the 10 most highly selling drugs are made with genetic engineering. It is a fantastic technology.  I am all for its use in drugs or in the lab.

But not for commercial use.

Not for commercial use.

That is why we found you making common cause with an organization like the Swadeshi Jagran Manch which whom you do not share a commonality of views. After all, you offered to return the Padma Bhushan in 2015, protesting rising intolerance in the country.

The question of supporting one government or the other in totality is unscientific. At one time people labelled me a communist because I named my son after the communist leader Mohit Sen. I offer issue-based support. On the whole I believe the present government is very backward looking.  But if it is doing something good, I will be first one to say that’s good.  People have said I returned the Padma Bhushan because of my association with the Indian National Congress. I have been  one of the greatest critics of the Indian National Congress although I have known Jawaharlal Nehru, Indira Gandhi, Rajiv Gandhi, Narasimha Rao and in my book, An Agenda for the Nation, I gave 8 marks out of 100 (these were edited out-Ed) to the Manmohan Singh government.