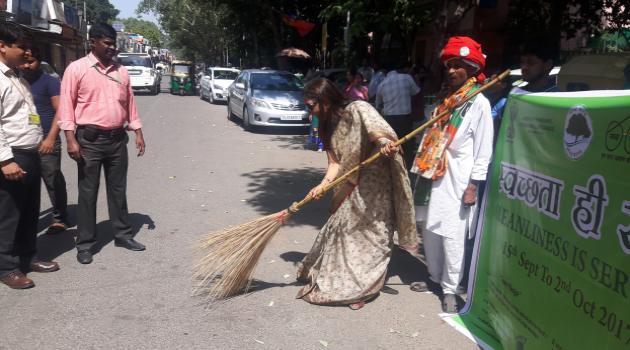 The illegal cultivation of herbicide-tolerant (HT)  cotton seems to have become as unwieldy a problem as the broom which Amita Prasad, Chairperson of Genetic Engineering Appraisal Committee (GEAC), is awkwardly wielding in the photo  above, taken on the occasion of Swachhata Diwas. In response to a question from Vivian  Fernandes whether the representation by South Asia Biotechnology Centre (SABC) in September was the first time that GEAC was learning about the illegal cultivation of HT cotton in the country, Prasad said, “Yes, information related to cultivation of herbicide-tolerant cotton was brought to the notice of GEAC very recently.”

Prasad seems to have been misled by her ministry officials because  the spokesperson of Monsanto said in response to the Andhra Pradesh government forming a committee on 5 October to study the “efficacy” of illegal HT cotton in the state that, “As early as September 2008, Monsanto had informed the country’s regulatory body – Genetic Engineering Appraisal Committee (GEAC) about seeds being illegally produced and sold by spurious and dubious seed producers to farmers without any approvals from Central or State regulatory agencies, in complete violation of applicable laws.” The Monsanto spokesperson was referring to its Roundup Ready Flex Bt cotton which was being pirated. “Over the years, we have kept the regulators and key stakeholders apprised of the illegal usage of unapproved technology. Even as late as August 2017, we have sought their intervention on the gross misuse of patented and regulated technologies which may pose numerous other challenges to India’s cotton ecosystem.”

In response to the question about what GEAC proposed to do about the cultivation of illegal HT cotton, Prasad said: “As soon as GEAC received such information, it acted immediately and requested Ministry of Agriculture (MoA), Indian Council of Agricultural Research (ICAR) and State Governments to take appropriate action and investigate the matter further.”

Prasad said GEAC had not received the February report of the Central Institute of Cotton Research, Nagpur, about six of nine cottonseed hybrids it had tested flashing positive for herbicide tolerance, not was it appraised by the Telangana government about a variety of Bt cottonseed called Kamadhenu being found with the HT gene. She said the Telangana government had not informed it of meetings held by its agriculture ministry on the issue of HT cotton cultivation in the state.