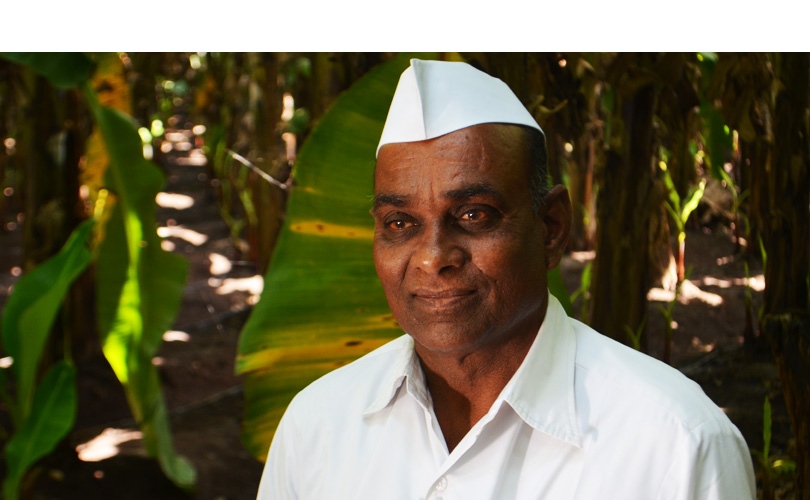 ‘I had nothing. I was selling tea in the open field,’ says Tenu Dongar Borole, 61, a banana cultivator of village Nhavi in Raver taluka of Jalgaon district. ‘Tenya, get three cups of tea, Tenya, four cups right away,’ is how people used to call him. That was before he took to banana farming . His father had three acres of land and would grow bananas the traditional way, that is, by diverting water in furrows with a spade, into square pits 1½ feet deep between rows.

When we met him in March 2015, Borole had 72,000 plants.  At 1,210 plants an acre, that was  60 acres under banana, forty of them on lease. The turning point came when Borole met Kalyansin Baburao Patil, a doctorate in banana cultivation and vice-president for tissue culture and agricultural services at Jain Irrigation. With tissue culture plants, drip irrigation and fertigation, Borole is able to get all his plants to flower unlike others in the village whose success rate is around 80 percent. Almost 95 percent of these mature into fruit, he says. He also gives fertilizer right till the end in intervals of a few days; village folk usually stop after the first four months. He does not need to save water as he has plenty of it, but drip irrigation allows him to calibrate supply according to weather, save on labour cost and cover the largest possible area during the short window when power is available. With an annual production of over 21 lakh tonnes, his turnover from bananas is about Rs 1.5 crore.  Like another short-sleeved kurta wearing chaiwallah this one too can claim to have truly arrived.