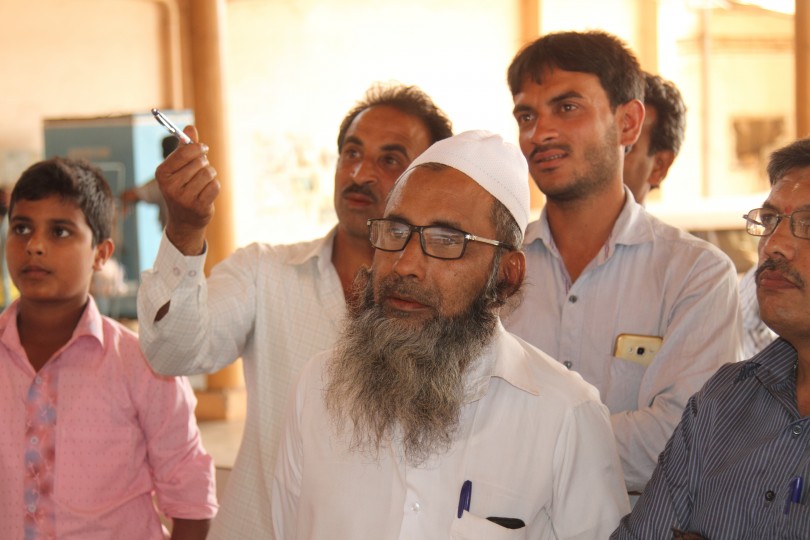 Vivian Fernandes reports from Sirsi in coastal Karnataka about the travails of betel nut farmers who have been hit hard by the cash squeeze.

Reserve Bank Deputy Governor S S Gandhi said at the terse 7 December, post-monetary policy press conference, that the decision to invalidate old Rs 500 and Rs 1,000 currency notes was a considered move and the economic disruption had been factored in.

Given the inconvenience that people face even a month after demonetisation and the extent of economic dislocation, RBI leaders are either brazen or have relied on questionable impact analysis.

A lot of red betel nut on sale at the Sirsi market yard. Photo by Vivian Fernandes.

At the Sirsi wholesale market yard for betel nut or supari, in Karnataka’s coastal district of Uttar Kannada (erstwhile North Canara), one of the largest cooperative societies has been compelled to curtail daily cash disbursements from Rs 60 lakh to Rs 2 lakh. “There has been disruption to some extent,” Raveesh Hegde, the society’s general manager, who was earlier a senior executive with a soft drinks multinational corporation, said.

A primary agricultural cooperative society, serving 924 members of the “Harugara group of villages” was giving out about Rs 50,000 to Rs 1 lakh a week against Rs 15 lakh earlier, its secetary G R Bhat said. To this correspondent, that kind of shrinkage seems savage.

Unlike elsewhere in rural India, the 23,000 farmer members of Totgars’ Cooperative Sale Society can largely transact without cash. The society formed in 1923 has undertaken a number of pro-farmer initiatives ─ quite a change from cooperatives which have by and large been run aground by special interest groups.

Totgars’ acts as a commission agent at the Sirsi yard, which is one of the largest for betel nut trading. Last year of 1.72 lakh quintals traded, 61 percent or 1.05 lakh quintals passed through its terminals. Another cooperative did 31 percent.

Apart from auctioning, the cooperatives buy on their own account to lift prices. Members can obtain pledge loans against betel nut stocks, or crop loans. They are not in hock to moneylenders. This is important because credit and agricultural output markets are often linked. Moneylenders double up as traders and farmers borrowers suffer a double blow: they pay very high rates of interest and are compelled to sell to the lender soon after harvest at low prices.  No so in Sirsi. In fact, Totgars’ rents out storage capacity ─ it has 60,000 kg of it – so farmers can sell in a staggered manner, as prices rise.

Totgars’ purchases seeds, fertilisers, irrigation equipment and groceries centrally.  Those buying from its stores get the benefit of scale efficiencies. It acts as a bank. Farmer members are provided two-way debit and credit cards, with which they can withdraw money from the cooperative’s own ATMs.  Banks, private or public, have been unable to make much of a dent here.

Since most of the farmers have accounts with the cooperative, they can settle transactions mutually through book entries. Hegde says “50-60 percent of transactions” can be done without cash. Yet, of Rs 670 crore worth of transactions last year, Hegde estimates about 150 cr (over 250 working days) were done with cash.

The cooperative spirit is not as entrenched in Byadgi, about 100 km from Sirsi. Along with Guntur in Andhra Pradesh, it is the largest market for chillies, though it grows very little of them locally, cotton and maize having taken over the fields. But farmers from neighbouring districts in Andhra and Karnataka prefer Byadgi because of transparent price discovery made possible by e-auctions, and goodwill built by the private commission agents over long years.

While trading is online in Byadgi, payments are not. “I am struggling to persuade farmers to opt for e-payments,” says Guruprasad (single name), secretary of the agriculture produce marketing committee. They need cash to pay those who work their fields and transport produce to the market. While fertilisers supplied through primary agricultural cooperatives can be paid for by cheque, retailers of seeds and other inputs wants cash payments. There is another reason seldom articulated.  Regular loan waivers have destroyed the credit culture. Farmers fear banks will grab money credited to their accounts to settle dues.  There is insurance in cash.

From a surgical strike on black money, Prime Minister Narendra Modi has touted demonetisation notes as a vehicle for transition to a cashless economy. But digital payments require upfront investments in banking infrastructure and Internet connectivity which may not be worthwhile in rural areas. They also presume a modicum of literacy. There is also the loss of control to reckon with. When a banker declines, for instance, to honour a bearer cheque because the signatory has made it payable to “self” and not the presenter, there is loss of autonomy. With cash, bankers cannot act as babus.