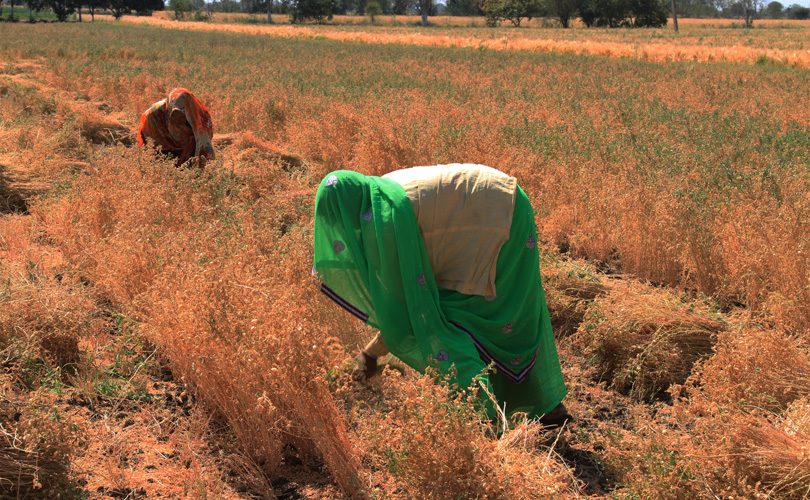 “Are we self-sufficient in pulses?” Peter Carberry, the Director-General of Icrisat, the Hyderabad-based international institute which researches dryland crops, asked Narendra Pratap Singh, the Director of Kanpur’s Indian Institute of Pulses Research (IIPR) during his presentation earlier this month. Singh replied that we are moving “towards” self-sufficiency. Though there has been a step up in the production of pulses to an average of 24 million tonnes in the past three years, Singh estimates the demand at about 32 million tonnes, which is why we continue to import about 5.5 to 6.5 million tonnes annually.

Carberry’s was a pertinent question because the shortage of pulses was acutely felt in 2015 and 2016. Production fell sharply due to bad weather. That and the (suspected) cartelization of the traders boosted prices. Pigeonpea (tur) sold 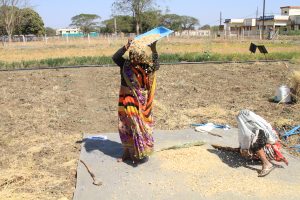 With consumers getting restive and prices becoming an issue in state assembly elections, the government stepped in with policy support. Seed hubs were established in the main 150 pulses-growing districts. Central agricultural research institutes and state agricultural universities stepped up production of breeder seeds. These were multiplied by seed corporations and extension agencies called KVKs for sale to farmers. Subsidy was given only for less-than-10-year-old seed varieties. These were not only high-yielding but also pest- and disease-resistant. Seed availability persuaded farmers to replace old with new.

With 63 percent of the global production, India leads in the cultivation of chickpea ─ a crop grown in 52 countries. Madhya Pradesh contributes the most to the country’s chickpea production. It the “chickpea bowl of the world,” says Pooran Gaur, Icrisat’s Research Programme Director for Asia, and a chickpea breeder.

In another report, we detailed how chickpea, a winter season crop of North India elbowed out of that region by the Green Revolution in rice and wheat, adapted to Andhra Pradesh, despite its warm weather. While average productivity is the highest in that state, Madhya Pradesh is the largest producer. It has shown continuous increases in area, production and yield. Area under chickpea in the state has increased eight-fold from an annual average of 64,700 hectares between 1971 and 1980 to over three million hectares.

The support which the government gave for pulses production after their prices spiked four years ago, wouldn’t have been effective if seed technology wasn’t available. Mohammad Yasin, Principal Scientist at the Rafi Ahmed Kidwai College of Agriculture in Sehore near Bhopal attributes Madhya Pradesh’s fascination for chickpea to the 54 improved varieties that were released since the 1960s, of which 21 are currently in the seed production system and 15 are popular. Most of the lines were developed at Icrisat and adapted to local conditions at the agricultural research stations in Madhya Pradesh and Maharashtra before release. They are high yielding and have maturities ranging from 85 to 120 days. The early maturing ones, which are harvested in March, can escape summer heat at the pod-filling stage. Most of them are resistant to wilt.  The state’s farmers can comfortably grow two crops a year of soybean and chickpea.

S K Rao, Vice-Chancellor of the state agricultural university at Gwalior, and a chickpea breeder, says good management practices are necessary to harness the yield grains from genetic improvements. The adoption of line-sowing with seed drills has resulted in better germination (than when broadcast), as the seeds are placed at the right depths, get the required moisture and the plant population is denser.  In the Malwa region, growers of extra bold seed Kabuli chana, the only variety allowed to be exported, have adopted integrated pest management practices and give water and nutrients in precise quantities through drip pipes, as they get premium prices. A hundred grains of these varieties weigh 45-50 grams, compared to desi chana varieties which weigh between 15 and 27 grams.

The state’s policies have been helpful. In Karnataka varieties released elsewhere need the endorsement of an official committee for local sowing. In Madhya Pradesh there is no such restriction. It also has a good seed production system, growing out of a 25-year-old programme at the agricultural university in Jabalpur which was funded by the Indian Council of Agricultural Research (ICAR).

The soybean-chickpea cycle while profitable, has had deleterious consequences too. In the areas of Madhya Pradesh where it’s alternated with soybean, the soil has been depleted of molybdenum, an element which enables leguminous plants to activate enzymes in their nodules which help absorb and store nitrogen from the air. Studies done by S C Gupta, Principal Scientist (soil science) at Rafi Ahmed Kidwai College of Agriculture have shown that by coating one kilogram of seed with just one gram of ammonium molybdate ─ an extra cost of Rs 400 per hectare ─ chickpea yield 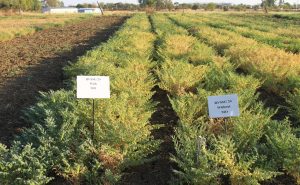 Chickpea trials at Rafi Ahmed Kidwai College of Agriculture, Sehore, MP, with and without Ammonium Molybdate.

can go up by three quintals.  This innovation was accepted and the government supplied the micronutrient at a discount for two years under the National Food Security Mission. But farmers couldn’t get it in the last planting season because of the government’s inability to contract supplies in time.

Madhya Pradesh’s average chickpea productivity is 1,160 kg per hectare, higher than the national average of 972 kg. Within the state, average yields are higher in the Chhindwara area (Chief Minister Kamal Nath’s constituency), though the 16 districts of the Malwa and Vindhya plateaus of which Indore and Bhopal respectively are best known, have larger areas under chickpea and higher production.

Chickpea is unique among pulses, in that only 15 percent of the output is used as dal, says Singh. About 60 percent is consumed as besan or added to atta to fortify it with fibre and protein. The rest is used as seed – it takes 80 to 100 kg of seed to sow a hectare.

The development of a summer variety which matures in 55-60 days has expanded the mungbean area in Punjab and Haryana because of the prohibition on early planting of rice, to conserve groundwater. The crop is grown after wheat and being a legume crop, helps improve soil fertility. Summer mungbean production has doubled over the past 15 years, though the output of the rainy season (Kharif) crop has been declining for much of that period.

To stabilize prices, higher pulses output will have to be complemented with better storage technologies. Whole pulses don’t keep long. In the presence of moisture they get infested with bruchids (lice-like pests) called ghun in Hindi. These enter during the flowering stage and get encapsulated in the seed coat. Singh recommends irradiating whole pulses with low doses of gamma rays. IIPR has found the machines used by Kanpur tanneries to decontaminate leather to be effective. Gaur says triple-layer bags, developed by Purdue University of the United States, are a low-cost, effective and insecticide-free method of storing pulses. They cut off oxygen-supply and prevent insect infestation. Developed under a project funded by the Bill & Melinda Gates Foundation, the bags have been used effectively to store cowpea (lobia) in Africa. The Odisha government has given 60,000 of these bags to farmers in the state this year for storing groundnut. Icrisat has recommended them for pulses as well.

(This report was first published in the Financial Express). All images on this page by the author. Top photo is of chickpea harvesting in Sehore, MP, February, 2019.