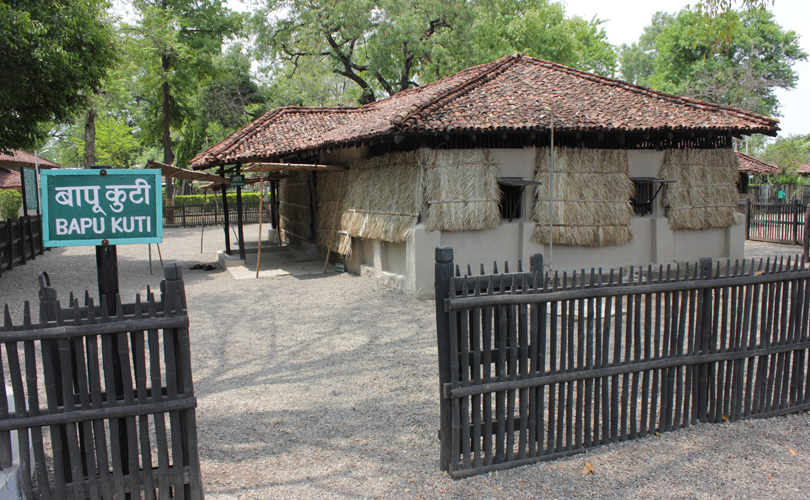 Cotton growing is an act of political expression in Vidarbha. It is dry and rain dependent but fertile ground for a range of views.  This was after all the political hot bed of the country. At Sevagram, a little distance from Wardha city, Mahatma Gandhi set up home in 1936 after he was released from jail, following the Dandi March and the Salt Satyagraha. It became a model of community living and self-purification through frugal living and noble thinking. Gandhiji’s philosophy of Sarvodaya lives on.

Chasing Profit, Not Yield
We meet Narendra Misal, 49, a post graduate of commerce and philosophy from Nagpur University. He is a farmer and owns twelve acres in Amgaon. He believes in growing cotton  untouched by (genetically-modified Bt) technology or chemical fertiliser. To preserve soil fertility he uses cattle manure.  No private company seeds either; he sows a variety called Suraj supplied by the Central Institute of Cotton Research, which costs Rs 150a kg. Bt cotton seeds

sell for Rs 830 a pack of 450 grams, after the Maharashtra government cut the maximum retail price by Rs 100.  Misal does high density planting of 38,700 plants per acre (that is 5 kg of seed).  Last year, despite bad weather, he got 5.5 quintals an acre; his best yield was the previous year’s seven quintals an acre.

Misal says he does not chase yield unlike the ‘ninety percent who are not with us,’ who are ‘influenced by media and advertising.’ What matters to him is what he saves.  He believes in low cost higher profit agriculture.

Leave Us Farmers Alone
In the adjoining district of Yavatmal, Vijay Mahadev Niwal, 52, is a devotee of technology. He is a member of the Shetkari Sanghatana; what drew him to it was founder Sharad Joshi’s philosophy of ‘freedom of markets, freedom of (choice in) technology and minimum power of government.’ He boasts that through the Sanghatana he helped distribute a large quantity of pirated Bt cottonseeds even  before the government approved them in 2002.  A graduate of engineering from Mumbai’s Victoria Technical Institute, Niwal and his brothers own 75 acres. He also has a ginning factory and a mobike dealership.

Niwal says seed price is not a significant item of cost relative to the returns from cotton. He does not quite agree that farmers have no choice and are compelled to buy hybrids.  His elders sowed saved seed but shifted from re-usable varieties to hybrids which have to be bought year after year. It was a conscious choice mediated by experience.

Niwal does not agree either with the proposition that hybrids are not suitable for rain-dependent areas like Yavatmal. True, the district gets 910 mm of rain (he is quite precise) but it is concentrated in forty days. And why has Marathwada, which gets 600 mm of rain, shifted from jowar to cotton? He doubts whether high density planting of varieties, a method propagated by the CICR, will work. ‘It is all propaganda,’ he says. He has not seen any practicing it in his village or vicinity.  He should know. ‘I do advanced farming. I am clued into current issues in agriculture and cotton.’

There was a dip in cotton yield this year because of sparse rains but not as much as in soyabean. Soya yields were in the range of two to six quintals per acre, because of a viral disease, against the expectation of ten quintals. Niwal will stick to cotton because there is technology embedded in it, unlike in soyabean. He has faith in technology and believes the companies selling the seed have a stake; they must ensure that productivity does not fall to an unprofitable level. .

Niwal is eagerly awaiting herbicide-tolerant cotton as manual de-weeding costs a lot. There is also an aversion to drudge labour. Herbicide tolerance will give him better control; de-weeding will not depend on availability of workers, and more area can be sprayed than workers can manage to clear in a day.  If the technology is not approved, he fears, Indian cotton might lose its competitive edge to herbicide-tolerant cotton from other countries.

‘I am benefiting from Bt Cotton’
On the way from Wardha to Yavatmal, just off the highway, we hop into Rustam Jamaluddin Turak’s farm in village Selsura. The 68-year-old is resting by the edge of the field, watching workers sow soyabean. Turak is a happy soul; he finds things have turned for the better over the years. For instance, the government has provided him an electrical

electrical connection fat the well to pump out water. He also got a subsidy for sprinklers. Farming is not quite a grind it was when he started at the age of 16.

‘I am benefiting from Bt cotton,’ says Turak. He gets eight to ten quintals an acre. He knows of farmers who have got fifteen quintals an acre with proper irrigation and fertilizer use. Earlier, he would get no more than four or five quintals.

Will he try out varieties, supplied by the government, as they are cheaper? ‘I hesitate to grow varieties because there is no guarantee of output. If they fail I will have to write of all twelve months.’  He says the price of hybrids is high, but there is no alternative. He will buy cheaper seeds if there is a performance guarantee.  He wants the government to hold a demonstration within a range of 15-20 km for farmers to become aware of the new practice of high density planting.

This year, Turak sold thirty five quintals from four acres at the rate of Rs 4,000 a quintal. His cost was Rs 80,000 in all. That left Rs 60,000 on the table. Turak’s grouse is that his property worth more than a crore rupees returns so little in terms of cash. In other words, he is asset rich and cash poor.

Costs are rising. De-weeding costs a lot as daily wages are in the range of Rs 250 to Rs 300. Cotton picking costs Rs 5 a kg. For 35 quintals, he paid Rs 17,500.  When he was younger, he would himself pick up the hoe and work the spray pump. He did not engage workers. Now he has to.

The Sampler of Cottonseed
Mahesh Tryambakro Niwal, 38, owns twenty acres in village Heevri of Yavatmal. He has installed drip irrigation on 3.5 acres of own land (out of 4.5 for cotton). He gets 15 to 16 quintals of cotton per acre on drip- irrigated fields.  Niwal says he tries out a new brand of Bt cottonseed every year. If it gives a good crop he sows it the next season.

Production costs are high. Cottonseed prices have been cut, but at Rs 830 a pack of 450 grams he finds them over-priced. In his view, Rs 500 is a fair price. With cotton selling

for a thousand rupees less per quintal than last year, Niwal does not find cotton a paying crop. But ‘there is no other cure.’ Being a year-long crop cotton does not let him down. The pickings of one flush might be meagre, but the subsequent flushes can make up.

Bt Cotton is for the Intelligent Farmer
Omprakash Bhikamchand Lohiya, 61, of Heevri village runs a grocery store. He has three acres on which he grows cotton. He had installed drips so he does not have to depend on workers to irrigate the fields. Bt cotton requires study, he says. Those who learn  (the required agronomic practices) will not suffer. He does not have to spray against bollworms — that’s a big difference from yesteryears. But sucking pests continue to trouble.

Lohiya does not like to admit to the media that cotton can be profitable. Three years ago, when we met him, he has the same whine about the the cost of pesticide, fertilisers and seeds eating into profits. That tune has not changed. After the decrease in cotton prices this season, ‘we have suffered a loss.’ This time, it sounds true.

rattles out the cottonseed brands and companies he has tried out. He seems to have sampled as many brands as the number of acres he owns, which is seven, of which four are under cotton. This time he has been persuaded to try out CICR’s Suraj variety for high density planting on one acre.  His experience with Bt cotton has been good. He has been planting it for the past four years and has got 7-8 quintals against 4-5 earlier. He saves about Rs 12,000 an acre. Is that good? ‘It is not,’ he says, but the farm has been handed down to him. Farming more of a filial obligation; it is not paying. Ambore is a police patil,  or a listening post in the village, for which he get paid Rs 3,000 a month. Managing law and order in the village is not such an issue as dealing with wild animals which lay waste to his field.