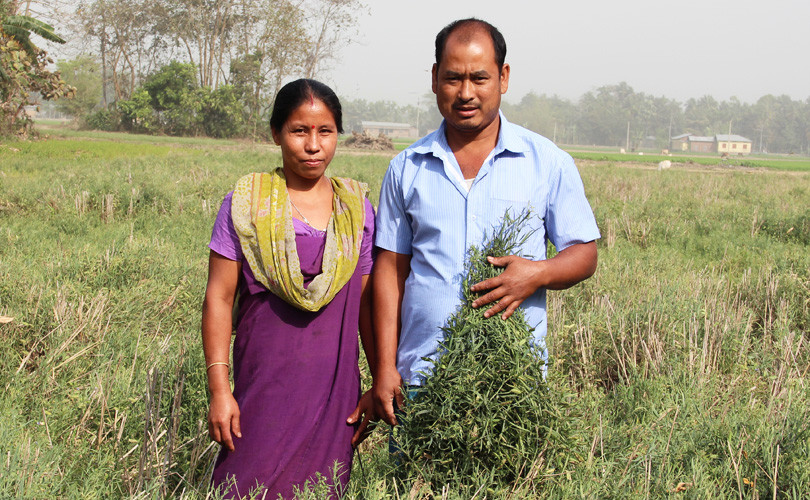 Khesari dal can once again return to kitchen shelves as the Indian Council of Medical Research finds little evidence of limb impairment attributable to it over the past twenty years. Vivian Fernandes reports that new varieties are safe for consumption.

The Food Safety and Standards Authority of India (FSSAI) is of the opinion that the ban on sale and storage of khesari dal should be lifted and the ministry of agriculture should promote cultivation of this nutritious pulse crop, so long as the varieties are low in ODAP, a neurotoxin that causes paralysis of the lower limbs in adult males when consumed for long durations in large quantities.

The decision was taken at the authority’s 6 November meeting after G S Toteja, head of nutrition at the Indian Council of Medical Research (ICMR) said its study had not come across any cases of neuro-lathyrism in the past twenty years that could be attributed to the pulse. The authority said the ban should be lifted ‘in view of its low consumption, availability of low-toxin varieties, high protein content and water-use efficiency.’ This view was supported by the Indian Council of Agricultural Research (ICAR).

Grass pea, as Khesari or Tiwara, is known in English, was prohibited for sale in itself or as an ingredient under the Prevention of Food Adulteration Act after a study published in 1964 attributed the crippling disease in young adult males to the dal in Rewa district of Madhya Pradesh. Since then various states have banned its sale and storage but there was no bar on cultivation. In 1983, the MP government forbade the payment of wages in the form of khesari dal after the collector of Rewa district suspected a connection between the pulse and the disease in the families of agricultural workers, on the basis of an inquiry ordered by the Supreme Court.

Despite the ban, khesari dal is grown on about 6.5 lakh hectares (ha) mainly in Chhattisgarh, Madhya Pradesh and Maharashtra, but also in Assam, Bihar, West Bengal, Jharkhand, and the Bundelkhand region of Uttar Pradesh, says Ashutosh Sarker of the International Centre for Agriculture in the Dry Areas (ICARDA). Chhattisgarh alone has nearly four lakh ha under the crop.   Annual production is about half a million tonnes. Before the ban, it was grown on 1.3 million ha. ‘It is the No 1 pulse crop in Bangladesh,’ says Sarker, who hails from that country. ‘It is grown on three lakh hectares, and has not been banned. On the contrary the Bangladesh government is encouraging its cultivation.’

If it is grown it will be sold. Khesari dal imparts crispiness to samosas. It is also quite cheap. Sarker says it retails for Rs 40-45 a kg in Bihar and West Bengal while besan  (gram flour) sells for double the price in Delhi. Traders adulterate besan with it, making a neat profit, which they deny to growers.

Grass pea is a hardy crop that can thrive in severe drought and even survive in water-logged soils. It is survival food for the poorest in times of crop failures. The dal is nutritious; about half of it is starch and the protein content varies between 26 percent and 32 percent. It is rich in anti-oxidants.

Khesari is a crop that can be harvested in a little less than 125 days. It has several uses. Shoots plucked after about a month are cooked as a leafy vegetable.  Growers let out their fields for cattle to graze on just before flowering. This has twin purposes: the dung nourishes the crop, which also branches profusely because of the natural ‘pruning’.  Khesari plants mixed with rice straw are nutritious fodder for stall-fed cattle. Being a leguminous crop, it enriches the soil with atmospheric nitrogen.

Pooja Sah, who is associated with implementation of the National Food Security Mission on Khesari at ICARDA, says the new varieties when fed to ruminants (cattle and goats) at the Indian Grassland and Fodder Research Institute in Jhansi, did not cause any adverse impact. Blood and milk samples did not reveal the presence of ODAP toxin, she says, citing V K Yadav, the institute’s principal scientist in support.

Relay cropping is a traditional practice. Grass pea seeds are broadcast over standing rice crop two weeks before it is due for harvesting. The residual moisture in the fields enables them to sprout quickly. Farmers may also prime the seeds by soaking them in water or a mixture of cattle dung and the micronutrient molybdenum. The crop needs no tilling and little care. The only investment is on quality seed.

ICARDA, which shifted its headquarters to Lebanon from Syria a few years ago owing to the civil war, is collaborating with NGOs and central and state agricultural research institutes to develop new varieties and expand area under improved ones. It has introduced a number of grass pea genetic variants of West Asian origin from its repertoire to India for testing and breeding. It has collaborated with the ICAR on four low-ODAP varieties: Prateek, Mahateora, Ratan and Nirmal have been developed at field stations in Delhi, Raipur and Behrampur. The OCP Foundation of Morocco (an exporter of phosphate to India) financially supports the initiative to propagate low-ODAP varieties, though ODAP imparts hardiness to the crop against pest and disease attacks and the vagaries of weather. Some low-ODAP varieties have yields of 1.8 tonnes to two tonnes per hectare against the average of half a tonne for traditional varieties in Chhattisgarh and 1.2 tonnes in Bihar.

Housewives are also being educated to remove the toxin from high-ODAP varieties by boiling, soaking, roasting or steeping in a two percent slaked lime (chuna) solution for three hours.

The rehabilitation of khesari dal owes much to Shantilal Kothari, the septuagenarian founder of Nagpur’s Academy of Nutrition Improvement, who, according to news agency IANS, sat on a hunger strike in 2008 sipping just an extract of the dal, to force the state government to revoke the ban.  He found the ban ‘nonsensical’ as the dal was consumed by tribals 0f the state’s Gadchiroli, Gondia, Chandrapur and Bhandara. districts.  They were exploited by traders, he said, who bought the dal cheap for adulteration.

Kothari also approached the Planning Commission a little over a year ago. An expert committee was set up by ICMR. It said doctors had not reported lathyrism cases attributable to kesari dal for the past twenty years.

‘I have thirty years of experience with the crop and I have not seen any person affected by lathyrism,’ says H C Nanda of Indira Gandhi Krishi Vishwavidhyalaya, Raipur, who developed the Mahateora variety. In the only case of lathyrism in his knowledge, a link with the dal could not be confirmed.

India has a shortage of pulses, whose prices are shooting, putting them out of the reach of the poorest. Every effort must be summoned to increase yield and area under them and tamp down rates. The neglect of khesari dal needs to be reversed.

(This report was also published in www.thequint.com)