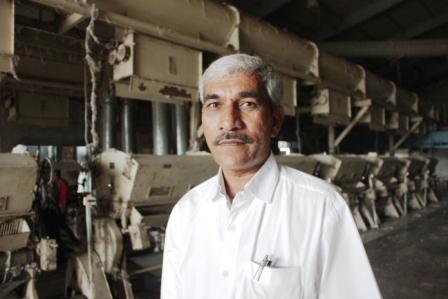 Small farmers needs to organize themselves to enhance their bargaining power and earn more for their effort. Vivian Fernandes reports on Sakhsham Industries, a producer company of 3,200 farmers operating out of Mehsana and Patan districts of Gujarat.

Mukesh Patel, 47, believes the government must help farmers help themselves rather than think its responsibility ends with doling out subsidies. A marginal farmer from Chanasma taluk in Patan district, with less than two hectares of land, he is currently the chairman of Saksham Industries, a producers’ company with 3,200 cotton farmers as members. In October 2002, he set it up with six others, in the belief, he says, that if farmers on the edge did not get a share of the value addition, they would themselves be edged out of the vocation.

A ginning unit which Saksham Industries leased out from the agricultural producers marketing committee at Unjha (best known for its cumin, fennel and psyllium or isabgol market) saves farmers about five percent  or Rs 200 a quintal in brokerage and charges.  Apart from higher prices, members get agronomic advice and the assurance of quality fertiliser and pesticides from dealers vetted by the company.

To be members, farmers have to invest at least Rs 1,000 in shares of Rs 10 each. The individual investment limit is Rs 10,000. Patel believes producer companies are superior to cooperatives, (which work on the principle of one member one vote), because of tighter regulatory requirements under the Companies’ Act. Sakham’s board of directors have put their skin on the job, he says, by providing personal guarantees for the loans it has taken. That should make them more diligent.

According to the agricultural census, Mehsana had 205,383 holdings of two hectares and less or 92 percent of the total in 2010-11. In Patan the respective numbers were 85,559 and 58 percent. The company is trying to persuade more farmers to join in. Its aspiration is to set up a spinning and weaving unit in about seven years.  It gels with Prime Minister Narendra Modi’s slogan during the 2014 Lok Sabha election campaign of integrating the cotton economy from fibre to fabric to fashion, though there is danger in farmers making it their own aspiration because running a textile unit requires a different set of skills than growing cotton.