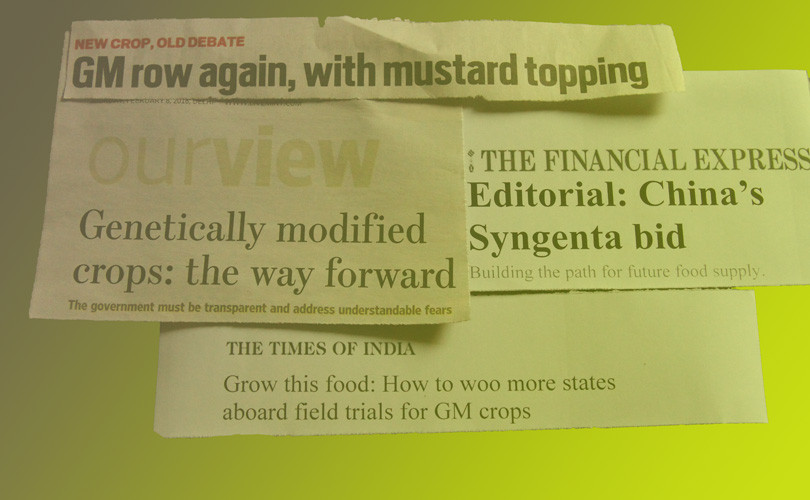 The Times of India, Mint, Indian Express, Economic Times, Financial Express, Deccan Herald and Business Standard have declared that GM crop technology is too useful to be rejected. Opponents must be heard, but should not hold sway, they say. (This report was updated on 19 February).

The Deccan Herald is the latest  – and at least the seventh – addition to the list of English newspapers supporting genetic modification crop technology in general, and GM mustard in particular. In an editorial on 18 February, it said since GM mustard has been developed indigenously with public funding, it did not pose the usual worries about foreign control of Indian agriculture.  The Bengaluru-based paper said an independent regulator should be set up and other steps taken to promote agricultural biotechnology.  The Business Standard in an editorial in the 10 February edition, had said opposition to GM crops was on two grounds: ideological and safety. There was little evidence to validate perceived dangers to bio-diversity or to human and animal health, it said. But the government was playing up to both the opponents of GM technology and to scientists. The Genetic Engineering Appraisal Commitee (GEAC) postponing a decision on approval for commercial release of GM mustard on 5 February was meant to appease the opponents, it said, while Environment Minister Prakash Javadekar’s statement that the government would not stop science nor impose GM food crops was meant to placate the scientific community.

On 14 January, the Times of India had set the lead. It said India needed GM crops to boost productivity, output and farmers’ income and cope with climate stresses. It pleaded again for GM mustard in a 9 February editorial titled, ‘Let Science Speak‘. ‘Tarikh pe tarikh seems to have become the fate of genetically-modified (GM) crops in India,’ it said in a reference to GEAC deferring a decision on GM mustard. “We must encourage research interest in biotechnology; not tie down scientists and innovators in Kakfaesque red tape. Environment minister Prakash Javadekar says the government is ‘not rushing through’ with GM. But regulator uncertainty and sloth doesn’t serve either science or the country well,” ToI observed.

The Financial Express in an 8 February editorial comment on ChinaChem’s $43 billion all-cash bid for the Swiss seeds and pesticides company, Syngenta, said the bid was an indicator that China was banking on GM crops to feed its population.

The Mint in an editorial on the same day blamed the Manmohan Singh and Narendra Modi governments for not managing negative perceptions of the technology created by a ‘minority within the scientific community’ and civil society groups. It said the opponents must be heard but they should not be allowed to hold sway.

The Indian Express in FAQs on GM mustard on 8 February said ‘most’ of the opposition to it was ideological, like that against Bt brinjal. The opponents did not have specific grouses for which correctives could be taken; they were opposed to GM crop technology itself.  The paper said the regulators had fed apprehensions by not putting biosafety data on GM mustard in the public domain. This was also Mint‘s view. The Express followed up the FAQs with an editorial on 9 February in which it criticized the government’s ‘ambivalence’ on GM mustard, when the country was importing 14.5 million tonnes of cooking oil, of which 3.5 million tonnes was predominantly GM soybean and rapeseed oil. ‘The “swadeshi” activists protesting against domestic cultivation  of GMO hybrid mustard seemed to be silent when it came to “videshi” imported GMO oils,’ it sarcastically observed. Asking the Modi government to ‘Call Luddites’ Bluff,’ the editorial said ‘There is little that is ‘swadeshi’ about resistance to GMO mustard. In fact, it fits into the Make in India framework.’

The Economic Times had in an editorial in August 2014 rebuked the the government for putting field trials of GM food crops on hold.

The Financial Express said by acquiring Syngenta, China National Chemical Corporation (ChinaChem) would get access to one of the four dominant producers of GM crops with over 7,000 seed varieties besides a pipeline of fungicides, herbicides and crop protection tools.  It was time Indian started thinking in similar terms, the FE editorial said.

The Times of India said India’s safety mechanisms were in line with those advocated by OECD, the club of mostly rich nations, and the International Plant Protection Commission. On this issue its stand is at variance with the other newspapers which have tried to balance support for GM mustard with a call for an improved regulatory system.

Mint, for example, says the regulatory system must by upgraded and the Biotechnology Regulatory Authority of India (BRAI) bill, which lapsed with the previous Lok Sabha, must be tabled again.  The Indian Express agrees. It says the current regulatory system is less than robust and is marred by conflicts of interest. It wants the BRAI bill to be quickly tabled in Parliament. A report in the Business Standard by Nitin Sethi on the same day as the editorial spoke mainly about of conflicts of interest.

Mint says multiple studies of GM crop technology have shown increased yields from resistance to pests and diseases and no human or ecological ill-effects.  It refers to a 2014 meta analysis (study of studies) by Wilhelm Klumper and Matin Qaim of the University of Gottingen, Germany. That study was of 147 studies on farm surveys and field trials of GM crops carried out across the world. It found that use of GM technology increased crop yields by 22 percent, reduced chemical pesticides by 37 percent and increased farm profits by 68 percent with better results in developing countries than in developed ones.

The Times of India endorsed agricultural scientist M S Swaminathan’s proposal for GM field trials across the country to be coordinated by the Indian Council of Agricultural Research and state agricultural universities. This would give confidence to state governments which have refused permission for field trials of GM strains approved by the Genetic Engineering Appraisal Committee.

This was also Economic Times’s stand. In its August 2014 editorial, it said  ‘testing facilities should be housed in universities and dedicated laboratories’ to allay fears about safety of GM crops. It said the Modi government had ‘erred’ in putting field trials of GM food crops on hold.  The country ‘requires’ them to meet the rising demand for food, it asserted.

Mint says the onus is on government leaders to reassure people because GM crops are not a purely scientific issue. They have a socio-economic and political context and involve understandable fears about long-term human and environmental safety, market capture and food security.

(Our view on some of the observations: We do not see a conflict of interest in the GEAC. The GEAC is housed in the ministry of environment. It is not part of the Department of Biotechnology, though some of its members are from that department. In this respect, it is like the Commissioner of Railway Safety which is under the ministry of civil aviation. The game plan of the opponents is to create doubt and delay. By questioning the integrity of GEAC, they want approvals to be postponed till the BRAI is created but they will not let the BRAI happen anytime soon. Why is conflict of interest not seen in the Directorate General of Civil Aviation being part of the civil aviation ministry or the Atomic Energy Regulatory Commission being part of the Department of Atomic Energy? The GEAC can be criticized for not posting the 3,000 page bio-safety dossier provided by Deepak Pental, the developer of GM mustard, on its website. But when it approves the hybrid, it will have to cite reasons. These can be challenged in court).