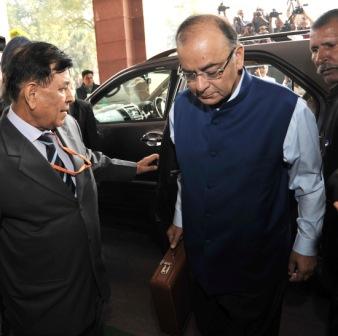 The finance minister has not been as generous to the agriculture sector as he made it seem in his budget speech says Vivian Fernandes.

Finance Minister Arun Jaitley made it seem that he was lavishing attention on agriculture out of concern for the sharp decline in growth of rural wages, and food prices coming off their ten-year global peaks. But the fine print does not support the impression. True, the soil heath card scheme gets Rs 200 cr versus Rs 93 cr in the last budget. The Paramparagat Krishi Vikas Yojana is a new scheme with an allocation of Rs 300 cr and micro-irrigation gets a big boost of Rs 1,800 cr from the earlier Rs 30 cr.

The agriculture ministry’s 2015 allocation at Rs 24,909 cr is lower than the revised estimate for 2014 by Rs 1,700 cr  which itself falls much short of the budget estimate.

The Finance Minster promised micro-irrigation an allocation of Rs 3,000 cr in the course of the year, but that is contingent on tax revenues getting bouncy.

The big support announced for Nabard’s funds for rural infrastructure, rural credit refinance and so on does not come from the budget but from defaults of commercial banks on their priority sector lending obligations.

The farm lending target of Rs 8.5 lakh crore for the coming year, is a step up by Rs 50,000 cr but less than half the amount was lent in the first six months of this financial year.

It is quite likely that overall spending on agriculture might be higher because of fatter  devolution to the states as advised by the 14th Finance Commission.