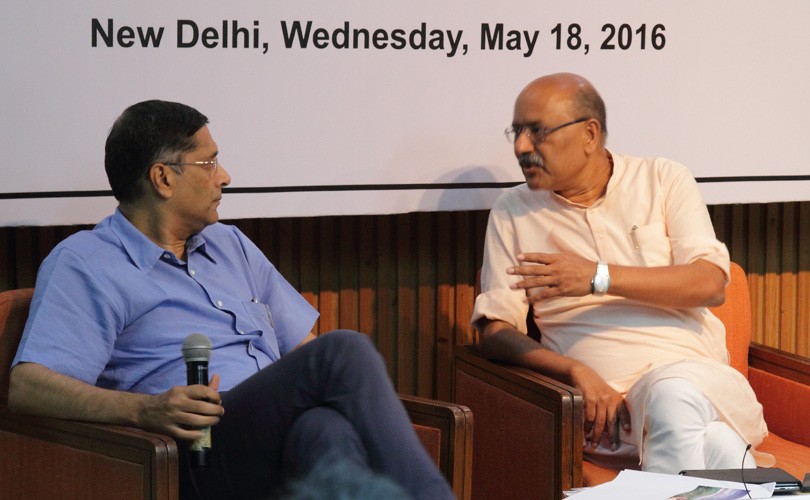 A Q&A session with Chief Economic Adviser Arvind Subramanian in the capital turned into an analysis of the government’s attitude towards agricultural biotechnology, reports Vivian Fernandes.

The Q&A session that followed Chief Economic Adviser Arvind Subramanian’s lecture on Indian agriculture had the audience riveted with former Indian Express Editor-in-Chief Shekhar Gupta tearing into the government for its anti-science disposition. ‘In my experience,’ Gupta said, ‘this establishment is the most fearful of agricultural science.’

Gupta lit into Agriculture Minister Radha Mohan for harassing the technology supplier (Monsanto) of genetically-modified (GM) Bt cotton, which has been a tremendous success in India over the past 14 years. The minister was obsessed with India’s distant past making tall claims for desi cotton and singing praises for the genetic lushness of indigenous cows, Gupta said, citing his tweets.

Subramanian put up a meek defence. ‘It is not fair to say this government is more anti-science,’ he said and gave the example of Bt brinjal, on which environment minister in the previous government, Jairam Ramesh, had imposed a ten-year moratorium in 2010 at the prodding of anti-GM activists.  Subramanian saw opposition to GM crops on both sides of th

e ideological divide: ‘there is Left anxiety about science and technology as well.’ The paradox, Subramanian said, was if the country was fearful of foreign-produced science but did not develop indigenous science, ‘in the long run you will be beholden to foreign technology.’

Even if a government were wary of foreign-produced science, it could promote indigenous science and cited the example of GM mustard developed by geneticist and former Delhi University vice-chancellor Deepak Pental (who is waiting since late last year for the environment ministry to end its vacillation).

For Gupta, India’s ‘tragedy’ was that its view on science was left of JNU (Jawaharlal Nehru University, which  is reputed to be a bastion of Leftist thinking) and right of SJM (Swadeshi Jagran Manch), a GM-crop and FDI (foreign direct investment) opposing affiliate of the RSS, the ideological mentor of the ruling party. The ‘poor scientist’ was wedged in between.

Subramanian felt there was a case of differentiating between GM food and non-food crops owing to safety concerns. India was consuming imported soybean and corn oil which are genetically modified, Gupta retorted, so what was the fuss about? A participant in the audience said the government was forced to allow cultivation of Bt cotton in 2002 because farmers were planting pirated seeds. The same would happen with Bt brinjal, which Bangladesh has allowed for cultivation. ‘Just keep a watch on yield increases of brinjal in West Bengal,’ Gupta said, ‘and you will know that the revolution has come in’ (that is, Bt brinjal seeds were being smuggled).

Gupta agreed with an audience participant that the media was unhelpful. He admitted most journalists were not well-informed, particularly on science.  But the government would have to exercise leadership. GM crops are thriving in the United States despite tremendous opposition and it has not agreed to labeling of GM foods.  ‘This is not a government that is moving towards modernization (of agriculture) or productivity increases,’ Gupta declared.

When an audience participant lamented poor allocation of funds for agricultural R&D in state institutes, Subramanian said productivity of spending was equally important. According to this year’s Economic Survey, expenditure on agricultural R&D has increased with the centre playing a bigger role, but public sector scientists needed to sweat more. Research productivity for 63.5 percent of them was ‘low to very low’, it said. Performance measurement was vital.

‘More and more we see internationally that R&D is also done by private sector actors,’ Subramanian said. ‘When we look at R&D spending it should not just be government spending more money on government institutions but also much more how do we rely on private sector R&D as well’.  Intellectual property protection was vital, he said, as also protecting the sanctity of contracts, hinting at ‘some recent things.’  Subramanian was alluding to the agriculture ministry slashing the technology fee payable by seed companies to Monsanto, the supplier of Bt cotton technology, which was properly the domain of private covenants. Scott E Sindelar, Minister Counselor for Agricultural Affairs at the US Embassy in India had told Economic Times that it sent ‘signals to US investors that may not reflect the opportunities in India. That’s our concern.’

(Top Photo: Shekhar Gupta sparring with CEA Arvind Subramanian after a lecture on farmers’ livelihoods in Delhi on 18 May. By Vivian Fernandes)