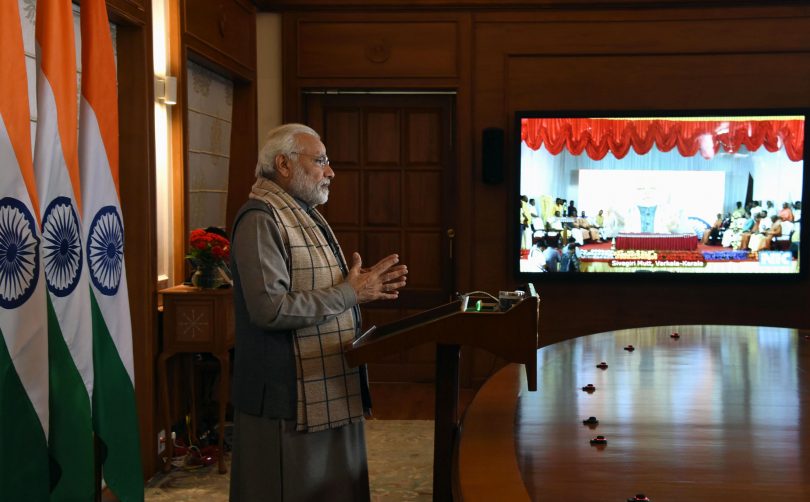 Vivian Fernandes reports the Prime Minister’s interaction with farmers via video link focussed on success stories and did not capture the struggles of those who had tried but not made the grade.

Prime Minister Narendra Modi’s 90-minute video conference with farmers across the country on Wednesday, 20 June was inspiring but also glib and facile. The mix was not representative. Only successes were curated. Not a crinkle of rural distress sneaked into the programme.

Don’t get me wrong. It gives me little pleasure to home in on adversity in the countryside. Media reports tend to focus on gloom and doom stories because they are episodic. It is only when agitating farmers get killed in police firing, on dump produce on roads to protest low prices or kill themselves owing to inability to repay debt, that rural news hits the headlines. Since newspapers and TV channels do not track changes over time, they miss individual initiatives and enterprise which when emulated and amplified result in vibrant change and churn in the countryside.

Such initiatives got splendid play on the Prime Minister’s show. A graduate from West Bengal, unable to find a job, turned to fish rearing and fish seed production. He employs 15 persons and made a profit of Rs 8 lakh last year on a turnover of Rs 20 lakh.

Neha Rathore, a graduate from Jhabua, a tribal district in Madhya Pradesh, said her harvest of tomatoes from a hectare (2.5 acres) of land had risen from five tonnes to eight after the adoption of drip irrigation. (This is rather low. The national average for the past three years was 23 tonnes per hectare). She was spending less on weeding and fertiliser, which are the collateral benefits of micro-irrigation.

Mukesh, a tribal agricultural labourer, also from Jhabua, said he had earned Rs 10.5 lakh over the past three-and-a-half years by setting up an agricultural equipment hiring centre. He had got a subsidy and concessional loans. He was servicing eight villages and they had not seen machines like rotavator and seed drill before he introduced them.

Another tribal woman was able to send her five girl-children to school with the Rs 1 lakh income she made from rearing Kadaknath chicken. (The black-feathered fowl are prized for their darkish meat.  Madhya Pradesh got the Geographical Indication (GI) tag for them earlier this year).

A lady from Sholapur in Maharashtra said their all-woman farmer producer company of 585 members had installed a pigeon pea (tur) cleaning, grading and sorting machine. It was packaging and selling dal under its own brand directly to consumers, and retaining the margin that middlemen would make. With advice from the local Krishi Vigyan Kendra (the government’s extension agency), its members had doubled their per-acre yield.

Farmers from Karnataka told how they had gained from soil health cards. Another set said the Prime Minister’s crop insurance scheme had compensated them for crop losses arising from monsoon failure.

For farmers from Sikkim, which was declared India’s first and only organic state last year, it was organic farming that did the trick. From Jodhpur came examples of farmers doubling their income by growing fruits like ber and pomegranate. Advice from the local agricultural research institute had helped overcome the disadvantages of scanty rainfall, salinity and poor soil.

The Prime Minister was both moderator and commentator. He inferred lessons from the cited examples for the wider audience to take away. Improvising and also reading from a teleprompter he elaborated on the government’s schemes – for soil health cards, crop insurance, drip irrigation, online trading at regulated mandis, and the promotion of organic farming, dairying, fisheries, and poultry-rearing – that the conferee farmers had tapped into. The Prime Minister was delighted that the eponymous schemes were delivering. He acknowledged the testimonies as bouquets of appreciation.

It was a neat show where creases were barred. When a farmer from Shahjahanpur, inserted “samasyaein bhi hain” (problems are there) into his narrative, the Prime Minister deftly cut to another farmer, a Muslim, Fahim-uz-Zaman Khan, who gained insights about farming under adverse conditions while visiting “Gujarat Vibrant.” (As Chief Minister, Modi had organized the first Vibrant Gujarat investment mela in 2003 to recast his image as a development man after the 2002 riots). Rajvinder Singh, when interrupted was saying that his income was unsteady because prices were volatile but costs kept rising.

There is often a token Muslim at the Prime Minister’s events. While campaigning for the Lok Sabha election, Modi showcased Ismail Sheru, a farmer from Banaskantha district who had grown over-sized potatoes for McCain’s, a supplier to McDonald’s. While addressing non-resident Indians at London’s Wembley Stadium in November 2015, he referred to Imran Khan, a Sanskrit teacher from Alwar in Rajasthan, who had donated 52 educational apps to the HRD ministry. (For the record, there is not even a token Muslim BJP MP in the Lok Sabha).

The show would have been less inauthentic if the Prime Minister had dwelt on the struggle that farmers had undergone while transitioning to higher income. By making success so easy to grasp ─ all farmers had to do was summon a little initiative and tap into the menu of empowering schemes ─ he reduced them to marketing props in a self-promotion exercise.

For instance, since the crop insurance scheme has the “Pradhan Mantri” tag, states drag their feet paying their half share of the premium. Last year, even a BJP-ruled state like Rajasthan issued the insurance notification for kharif planting season on 22 July denying farmers compensation for losses arising out of prevented sowing because of late arrival of monsoons. States also delay crop cutting experiments for assessment of losses. As coverage widens, premiums should fall because insurance works on the principle of pooling of risk, but perhaps due to collusion among insurance companies, rates remain high.

The electronic National Agricultural Market should allow commission agents in any of the 550 regulated mandis to buy produce remotely, but that seldom happens. In the absence of standard grades, and assaying, sorting and grading facilities a remote trader is not sure that the quality offered is the same as the quality bid. If there is a discrepancy, they do not have a dispute resolution mechanism to turn to. Inter-mandi trades, therefore, are few denying farmers the benefit of price competition.

Commission agents double up as moneylenders. They force farmers to settle dues soon after harvest when prices are low. Since farmers are not free to borrow from banks, they are not free to sell at remunerative prices.

Agricultural markets are very unfree. The government imposes storage limits, clamps down on exports when prices shoot, and allows imports to keep retail prices in check. The farmer suffers when there is a glut and but is not allowed to recoup losses when prices rebound

Such complexities were missing in the Prime Minister sanitized show.

(This story was first published in thequint.com)