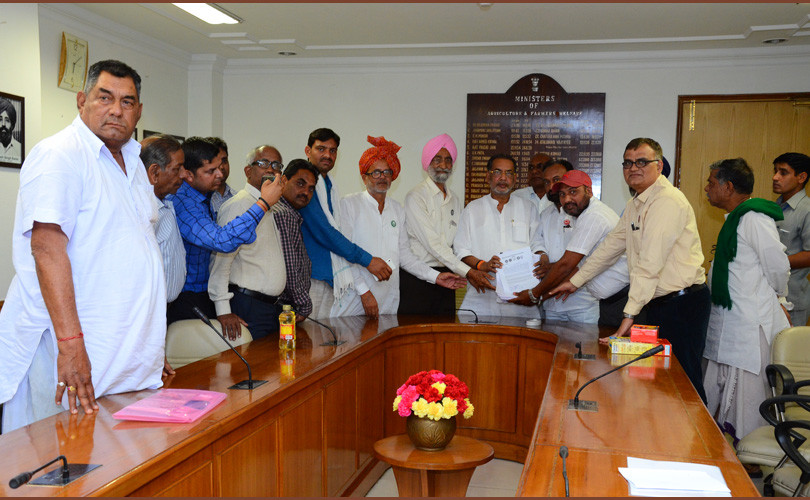 The association of agri-biotech companies has made common cause with farmers organizations to force the government to end its vacillation on GM mustard. When India is putting vehicles into space, should its farmers continue to sit under peepal trees? asked a farmer. Vivian Fernandes reports that a section of farmers is getting restive over the denial of the right to choose technology. They want the government to be guided by scientific evidence, and not outsource decision-making to activists and ideologues.

They said they presented them with 138,313 petitions in support signed by farmers of sixteen states.

The leaders had been brought together by the Association of Biotech-led Enterprises-Agriculture Focus Group (ABLE-AG), which has a common interest in promoting GM crops in the country.

Pental said neither the farmer leaders nor ABLE-AG had informed him of the exercise.

Earlier the leaders sought an appointment with the Prime Minister through Parliamentary Affairs Minister Venkaiah Naidu. One of those present during the conversation said the Prime Minister’s Office advised Naidu to tell them to meet BJP President Amit Shah.

The person, who did not wish to be named, said Radha Mohan was in favour of GM mustard, who reportedly said he would promptly implement the decision of the Genetic Engineering Appraisal Committee (GEAC), should its recommendation in favour be endorsed by the environment minister.

A farmer leader said he got the impression that the environment minister was also supportive but wanted time for the BJP to sort out its differences on the issue.

At a press conference at the Press Club of India, they questioned the double standards of BJP’s associate organizations ─ the Swadeshi Jagran Manch and the Bharatiya Kisan Sangh – which oppose GM mustard but not the import of genetically-modified rapeseed oil. They displayed imported packaged products made from GM soybean and rapeseed, purchased from nearby Khan Market.

The farmers suspect an import lobby. They believe it is led by a business leader with interests in edible oil, ports, power and coal and is forcing the government to go slow. This may well be conjecture and mere conspiracy theorizing but also reveals their suspicion of government intentions.

The farmer representatives wondered why the Prime Minister was not asserting himself in favour when Gujarat’s rural economy was transformed under his watch as chief minister by genetically-modified Bt cotton.  The DMH-11 GM mustard strain which is pending approval since September, they say, has been developed indigenously with public money (mainly from the National Dairy Development Board), so it also passes the test of ‘swadeshi.’

‘We are going to Mars but farmers are still sitting under peepal trees,’ said Pawan Payal of Sir Chhotu Ram Bharatiya Kisan Samiti, referring to India’s unmanned vehicle which completed one year of orbiting around the planet last December. ‘Kisan aur vigyan ke saath anyay ho raha hai,’ (injustice is being done to farmers and science)  the farmer leader from Rajasthan’s Jhunjhunu district said. A mustard grower for the past couple of decades, Payal said the crop has latterly been devastated by margoja or orobanche, a parasitic weed.  He was under the impression that GM mustard would not only improve upon dwindling mustard yields but also ward off the parasite.

Pental said Monsanto’s weed killer glyphosate was effective against orobanche, but his GM mustard strain was not resistant to glyphosate. Glyphosate-resistant genes could be stacked on to it, he said.

‘Why are you opposed to technology only in agriculture,’ asked Gunvant Patil, Maharashtra President of the Shetkari Sanghatana, when there was no bar on high-tech gizmos like iPhones coming  to India. ‘We want a revolution in mustard like in cotton,’ Patil said. He recounted how the Shetkari Sanghatana had opposed the burning of Bt cotton grown from illegal seeds in 2002 in Gujarat and had even smuggled the seeds to neighbouring states. ‘We want beej ki azaadi (seed freedom),’ he declared.

Guni Prakash of Haryana’s Bharatiya Kisan Union drew attention to the situation in the 1960s and 1970s when India decided to shift from desi wheat and rice and desi cows to imported dwarf varieties of the two cereals and high-yielding milch cows. ‘If we had depended on desi technology the country would have gone hungry,’ Prakash said.

‘If I am not allowed to increase production of mustard, there must be some conspiracy,’ said Bhupinder Singh Mann, who grows the oil seed in Punjab’s Batala district. Pental’s GM mustard had been found to increase yields by 20-30 percent in field trials. If approved, GM mustard will be available for cultivation in Delhi and Punjab, the two states that had allowed final trials. At least seven English dailies have called for approval of GM mustard in their editorials.

To know more about DMH-11 please read this report on thewire.in