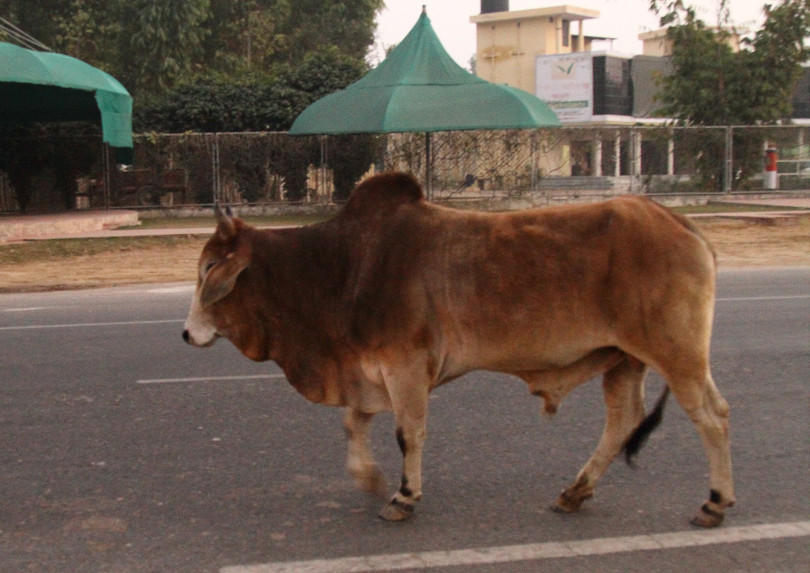 Vivian Fernandes flags off a growing worry in the countryside. Farmers are torn between affection for animals, the cost of maintaining them and laws that do not let them decide.

Policies crafted out of religious sentiment to protect cows, calves and bulls are imposing unintended costs on farmers. During a recent visit to Abohar on the India-Pakistan border in Punjab, one found fields fenced to ward off stray cattle, a recent development said Ajay Jakhar, Chairman of the Bharat Krishak Samaj, and a local, albeit part-time, resident.

Abandoned animals in Abohar, off the highway to Sriganganagar

Abandoned bovines, mostly males, were foraging on rubbish dumps and ruminating listlessly, even hopelessly. Entire families have been lost to accidents on the unlit highway to Sriganganagar, the manager of a kinnow nursery said.

In Rajasthan, the prohibition on sale of calves before the age of three is telling on the population of Nagori cattle, a good draught breed, said Sudesh Chowdhary, former president of Sriganganagar District Cooperative Milk Federation, a dairy which processes on average about 1.5 lakh litres of milk per day. They dairy has 1,200 member-societies, about half of them active, with about thirty milk ‘pourers’ each on any day.  Chowdhary is also a large kinnow farmer with a 112-acre family orchard at Gangarbed village in Sri Vijaynagar tehsil of the district. Unlike most farmers who sell to wholesalers, Chowdhary markets his produce himself.

‘Animals have to be trained for ploughing,’ Chowdhary said. ‘They cannot be trained at the age of three.’ Male calves used to be sold when six months old and farmers would get some money. Now they have become cost centres, to use corporate jargon. ‘The daily cost of feeding is enormous,’ Chowdhary said. With machines taking over farm operations, there is little use for draught animals. ‘I have a (Nagori) bull for breeding. I could not find an animal-driven fodder chopper or chakki,’ to keep it gainfully engaged, he added.

Chowdhary thinks goshalas cannot cater to large numbers. Another law that Rajasthan is likely to enact would require bovines to be transported in registered carriers meant only for animals and declaring as much in bold letters. Those trucks will not be permitted to move goods. ‘Why do we make laws that have to be violated?’ asks Chowdhary.

In Bundelkhand in Madhya Pradesh, a farmer from Chhattarpur told this correspondent on his own, without being prompted that they were in a dilemma. They could not dispose of unproductive bovines nor afford to feed them, especially with monsoons failing for the second season in a row.

(Top photo: A bull on the Sriganganagar highway at Abohar. All photos on this page by Vivian Fernandes)