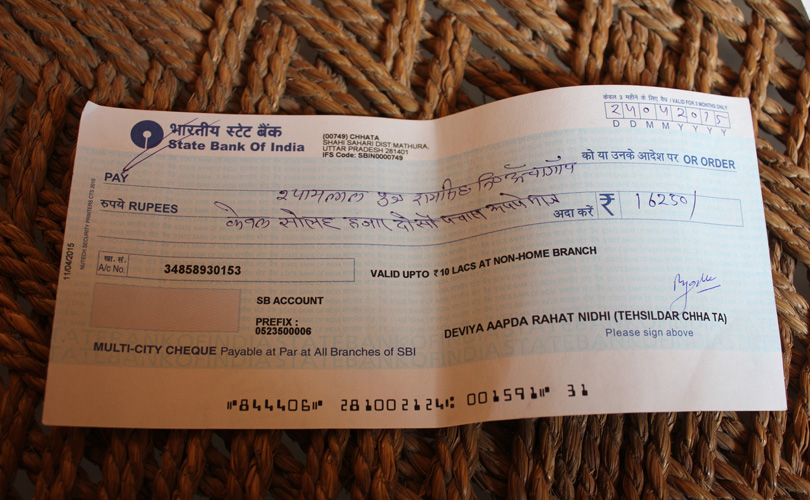 On the third of April, Mathura was hit by hailstorms. The rain that followed added to the woes of farmers. Wheat, which covers, 80

Wheat damaged by rain at the time of harvest.

percent of the district’s sown area, lost lustre and colour. The government relaxed the quality norms, but the farmers were met on 5 May complained little procuring was happening. Instead, they said, commission agents were beating down the price at the mandis. The farmers suspected the officials were colluding with agents, who would sell the grain to the government at (higher) support price and make a neat profit. (Note: this is an allegation. We have not independently verified it).

The collector had assessed the compensation payable to the district’s farmers at Rs 471 cr on the basis of the enhanced rate announced by the central government. We met him at his residence on the morning of 5 May, 2015. Excerpts from that interview.

Q: You are providing calamity relief. What about crop insurance?
Ans: Mathura is covered by the weather-based insurance scheme. There is also mNAIS (modified National Crop Insurance Scheme, which is yield-based). We did an analysis and the alarming issue that comes to the fore is the coverage of crop insurance is very less. If you look at the data, in kharif only 18,811 farmers were covered, while we have four lakh farmers. This needs to be expanded. In rabi, we find the same, around 18,000. Our analysis shows that the premium (paid to insurance companies) and the claims (they pay out) is about equal. The parameters should be changed. We are making a case and sending it to the government.

Q: What can be done to widen the coverage?
Ans: There is need for wide publicity. The media must play a role. We did a meeting with banks. For Kisan Credit Cards (meant for crop loans) farmers are adamant that even if they insure, they will not get anything. The premium money is an unnecessary expense. We need to publicize that this is a scheme meant for you and with a small premium you get a good coverage.  The scheme should be skewed to farmers.

Q: How?
Ans: This time farmers’ compensation from Mathura was Rs 9.69 cr for kharif and after the loss (due to drought), they got Rs 9.5 cr. This is almost equivalent or slightly less. Farmers pay 10-15 percent of the share (of premium) and the rest is that of the central government. This is equivalent to the central government reimbursing the loss.  Normally, in an insurance scheme, like of a car or house, the premium is less and if there is a loss, you get ten times or eight times the premium paid. It (crop insurance) has to be changed. Everything evolves and improvement happens over time from learnings.

(Note: Pramod Kumar Aggarwal, an insurance modeller, who works with insurance companies to develop products, says crop insurance should not be seen as a fixed deposit, where you get back what you put in).

More important is publicity. If a farmers pay Rs 400 premium, he gets Rs 1,700, which is four times (this was the payout for damage to paddy crop in kharif 2014). It is good for farmers the way the weather is getting disturbed these days.

(Top photo: Compensation cheque given by the government to a Mathura farmer. By Vivian Fernandes)