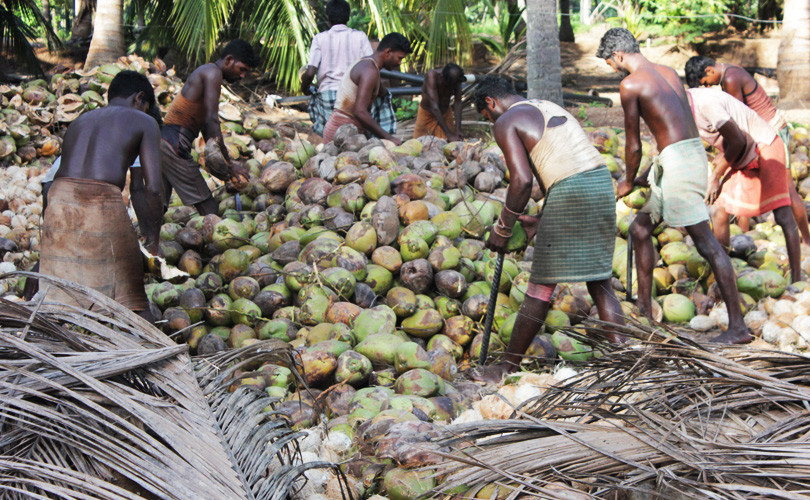 Farmer Producer Companies are good at increasing production and they are able to stand up to middle-men. But can they get a grip on marketing? Those championing them say marketing federations at the state level can plug this gap and e-Commerce holds promise. Vivian Fernandes reports on four FPCs after his visit to Coimbatore. This story was first published in www.firstpost.com (link below)

A shoot for a television series ‘Smart Agriculture’ brings us to Coimbatore in Tamil Nadu. S. Subburathinam, 53, of Navakkarai village on the Kerala border, takes us through trellises on which snake gourd creepers laze like pale bodies on sunny sands. He has 58 acres of them, most of it leased land.

Subburathinam who did not study beyond class 12, is director of the Kovai Farmers Producer Company.  It has 520 shareholders who between them produce about 50 tonnes of gourds a day. It was formed in August 2013, more than a decade after a dozen farmers in Navakkari and Vettaikaranpudur decided to band together to get a better deal from traders who short changed them on various pretexts. They would buy by the sack full, not by weight. Bent gourds would be paid half the price, but sold at the full rate. There would be deductions for transportation.

Coimbatore is the transit point for vegetables to Kerala. Exports to that state and the city’s own consumption add up to about two hundred truckloads of vegetables. The produce of the Kovai company ── about five truck loads a day ─ is not market moving, but enough for traders to fall in line. Prices are fixed for the next fortnight based on rates at various markets.  A live and let live policy is followed.

‘Actually, the trader has also to survive. So we leave legroom of Rs 1 to 1.5 a kg. If we find that he has earned more we pluck it from him the next time,’ says S Mohan Raj, chairman of the company.  Snake gourds were selling for Rs 19 a kg, ridge gourds for Rs 15 and bitter gourds for Rs 14 on Sunday, 12 June in Coimbatore, a week after our visit. In the government-regulated mandis a flat ten percent commission is charged.

At Thondamuttur near Coimbatore, it was a spiritual leader known was Sadguru, who provided the initial thrust for a producer company of coconut growers in 2012. Though aware of the gains of collective action, the growers were wary of grand intentions crashing into poor outcomes. It took scores of meetings to win them over.

‘We held more than eighty meetings with the help of volunteers from Sadguru’s Isha Foundation,’ says OKR Radhakrishnan, coordinator of the Velliangiri Farmers’ Producer Company.  Radhakrishnan is a cane specialist and has worked with many south Indian sugar companies. He had also set up a sugar factory in Cameroon at the initiative of the World Bank, before volunteering his services to foundation. ‘With great difficulty we registered 220 farmers initially,’ he says.

Individually, the small holders suffered many indignities. Coconut pluckers would charge more than a rupee per nut or about eighty rupees per tree. The shellers were equally demanding as agricultural labour is in short supply in this part of the country. Traders would claim more than their fair share. The farmers company has stopped these exactions. It has engaged teams of pluckers and shellers.  They get regular work and charge lower rates.  Traders cannot beat down prices.

Farmer producer companies have been enabled through a 2002 amendment to the companies act, so that they do not face the political pulls and pressures which cooperatives are subject to. Like cooperatives they have one member one vote, but unlike them, there is no provision for veto-wielding government representation on the board. This is supposed to assure their autonomy.

There are 445 FPCs in the country, with Tamil Nadu leading at 51, Madhya Pradesh at 48 and Telangana 40. The Delhi-based Small Farmer Agribusiness Consortium sponsors them with matching grants of equity and credit guarantee without collateral up to a certain limit.  Incidentally, it was Manmohan Singh as finance minister, who proposed SFACs in his 1992 budget that opened up the economy, as incubators of rural enterprise.

States have also set up their own SFACs as sponsoring institutions and Nabard, the agricultural lending agency, has got into the act. It has a target of 2,000 FPCs by end of March next year.

The thinking behind FPCs is to help relieve rural distress arising from the relentless sub-division of landholdings.  Easier leasing laws can help consolidate fragmented holdings but states have not amended tenancy legislation (which regard the tiller as the owner) to allow longer leases (though there is a vibrant informal leasing market). ‘The idea of the FPO (farmer producer organization) is to avoid the legal challenges of consolidation but to consolidate farmers as shareholders in one entity,’ says Pravesh Sharma, managing director of SFAC.( His interview here.)

Though farmers tend be sceptical, the promise of higher price realisation through better bargaining power persuades them. FPCs bring economies of bulk purchases and the assurance of quality to inputs like fertilizer, seeds and chemicals.   Since modern agriculture must be run as a business, where technology and good agronomic practices play a key role, they can jointly hire agronomists as well. Quite a few do, because the government pays their salaries for the first three years.

Are FPCs just self-help groups in a corporate form? Can they grasp the nuances of finance and marketing? Sharma admits that production is their core competence. ‘The answer we have found is federating or aggregating at a higher level. In states where we have found the number of FPOs has crossed 25 or 30, we are facilitating the promotion of state level producer companies,’ which can arrange finance, deal with input suppliers and look after marketing on behalf of their constituents. One has made a business plan for Rs 100 cr for the coming year, he says.

Sharma believes that e-commerce can give FPCs an enormous leg-up. They have breathed life into handicrafts by connecting artisans in far-flung areas with urban consumers. SFAC has tied up with RML Information Services, formerly known as Reuters Market Light, to connect 380 FPOs with dealers and buyers.

E Vaidel, whom SFAC has engaged as a ‘resource person’ or consultant to hand-hold the FPCs, believes even if half of them fail, stars could emerge from the rest. Vadivel was professor of horticulture at Tamil Nadu Agricultural University, and active in agricultural extension even before the FPC movement gained traction. ‘Sometimes village wisdom is more sensible than corporate wisdom. A few enterprising farmers from the village will emerge as giants.  They will give the lead to the rest,’ he says.

One cannot discount his optimism.  Many of our entrepreneurs have emerged from peasant communities like Gounder, Patidar, Kamma, Kapu and Reddy.  It was township and village enterprises that set the pace for China’s manufacturing boom and forced state-owned enterprises to reform.  But many of the consultants guiding the FPCs have an NGO background. They tend to be development- not business-oriented. Farmer members themselves might not want to let go and entrust operations to professional managers. It is hard to see FPCs, with a few exceptions, evolve differently from cooperatives.

(Top photo: Coconut shellers at work for a member of the Velliangiri Farmers Producer Company. All photos on this page by Vivian Fernandes).