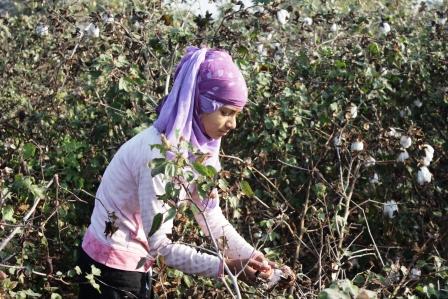 Labour is scare during periods of peak agricultural operations and wages are steep. The fall in cotton prices this year is not a trigger, but will be a spur for mechanization reports Vivian Fernandes after a visit to Mehsana (Gujarat) in January and to Aurangabad (mid-February). This report was also published on Yahoo! India news on 1 March, 2015

Kanhaiyyalal Patel, 52, cannot hide his disappointment as he contemplates a cheque for Rs 76,154  given him by Saksham Industries for 1,800 kg of cotton. A farmer of Tunda village, in Mehsana’s Unjha taluk, renowned for the wholesale market for cumin, flaxseed and fennel, Patel’s cheer at getting a better rate than that obtaining at Unava mandi a stone’s throw away, is clouded by a feeling of relative deprivation. Prices have declined by ten percent in one month and the rate for Gujarat’s benchmark variety has touched a forty-two month low since new arrivals started. The crop this year has been abundant and China’s purchases have declined by a third.  A cotton slump like this has not been seen in many years. Patel will share a quarter of the proceeds with his partner, labour contractor Baldev Bhai Vaghela, 48. ‘What is India’s standard of living?’ he asks when pointed that he will not make a loss, suggesting that the size of his surplus does not measure up.

Saksham offers Patel better terms because it is a producer company with 3,200 farmers as members. Mukesh Patel, its chairman, himself a marginal farmer from Chanasma taluk in adjoining Patan district set it up with six others in 2002 in the belief that if farmers on the edge did not get a share of the value addition, they would themselves be edged out of the vocation.

A ginning unit, which Saksham Industries leased out from the Unava’s agricultural producers marketing committee, saves farmers about five percent or Rs 200 a quintal (100 kg) in mandi commissions and charges.  Apart from higher prices, members get agronomic advice and the assurance of quality fertiliser and pesticides from dealers vetted by the company.

To be members, farmers have to invest at least Rs 1,000 in shares of Rs 10 each. The individual investment limit is Rs 10,000. Patel believes producer companies are superior to cooperatives, (which work on the principle of one member one vote), because of tighter regulatory requirements under the Companies’ Act. According to the agricultural census, Mehsana had 205,383 holdings of two hectares and less or 92 percent of the total in 2010-11. In Patan the respective numbers were 85,559 and 58 percent. The company is trying to persuade more farmers to join in.

But after years of high returns from cotton, falling prices have unnerved cotton farmers. Praveenbhai Patel of Kansarakui village, in Mehsana’s Visnagar taluka (where Prime Minister Narendra Modi was born) is thinking of growing vegetables for the Delhi market instead.

Though hybrid Bt cotton (which covers 95 percent of India cotton acreage) yields more (by reducing pest damage), inputs costs are also high. Irrigation burns a hole. Rajendrabhai Patel, 50, a teacher-farmer of Jethalvasna village in the same taluka spends Rs 6,000 a year on water for two bighas (or 1.2 acres). He is a member of a tubewell mandali (collective). The water has to be extracted from a depth of six hundred feet. Every farmer’s turn comes after 26 days, says Kantibhai Patel, 61, the collective’s clerk.  That rules out thrifty sprinkler or drip irrigation; the practice is to flood the fields to keep the soil moist till the next session. The tube well attracts a fixed electricity charge as it is fifteen years old; new ones can only get metered – and costlier – power.

Arvindbhai Patel, 48, also of the same village owns a tube well and has installed a sprinkler system. He cultivates 34 acres, jointly with his two brothers. The seven acres under cotton will yield him ninety-seven quintals and an annual profit of about Rs 2.5 lakh. He is one of those who has benefited from the government’s river-interlinking project. That has recharged dead wells and lifted the water table.  Though the Narmada canal passes through the district, the channels to being water to the fields have not yet been laid. Most of the district’s net irrigated area of 6.3 lakh acres depends on ground water. Farmers complain that the minimum support price is based on cheaper canal water.

Wages also rank high on the list of expenses. According to the national sample survey, Gujarat’s nearly four million households or two thirds of the rural ones cite farming as the principal occupation of at least one family member. But labour is either scarce or not available when required. A cotton picker said she was paid Rs 120 for eight hours of work with a break around noon. Deepakbhai Patel, of Kanasarakui village said cotton picking machines on hire would help nicely. Though extensively used abroad, these are only now being developed in India by New Holland Fiat and John Deere in India. The plants will have to be tailored for mechanized picking and Monsanto demonstrated the crop to farmers and Maharashtra state agriculture officials at Vasantrao Naik Marathwada University in Parbani in the second week of February. They were told that the planting has to be erect, the leaf structure should be open and not drooping and the bolls should mature at the same time.  Uniformity in plant height is achieved by spraying a growth retardant on the seventieth day.  The fields are also densely planted. ‘Farmers are coming in large number to see because there is a felt need,’ says S S Ghuge, Principal of a diploma school in agro-technology, attached to the university.

De-weeding is another labour intensive operation. Rajendrabhai Patel hopes the government would approve herbicide-tolerant cotton for commercial cultivation. Mahyco-Monsanto had completed the bio-safety tests for such a variant and the data were submitted to the environment ministry’s Genetic Engineering Appraisal (previously Approvals) Committee in August 2013.

Not many farmers will opt out of cotton like Praveenbhai unless the slump is prolonged, but the fall in prices has lent urgency to their search for cost-effective mechanized farming solutions. Rohtash Mal of EM3 Agriservices, a start-up that hires out farm equipment in two district of Madhya Pradesh put it neatly: tech and mech will have to combine for India to make the next leap in agriculture.