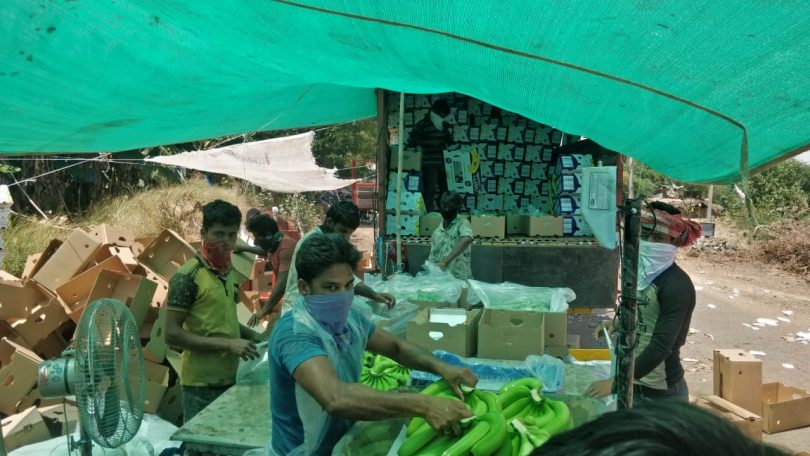 The lockdown which commenced on 24 March with just four hours’ notice compelled the growers to sell at any cost. In Jalgaon, which is the hub of banana cultivation, wholesalers (who also own the ripening chambers) are blamed for making handsome profits at the expense of farmers.  The wholesalers have their own sob story. Vivian Fernandes reports.

Avinash Nathu Patil, 37, counts himself lucky. A resident of Shingadi village in Jagaon’s Raver taluka, he has been growing bananas since 2008, when a three-year search failed to fetch him a job after graduation in computer science. With high-yielding tissue cultured saplings from Jain Irrigation, nurtured with water-soluble nutrients supplied precisely through drip irrigation pipes, he has built a profitable business. Late rains last year, compelled him to plant late. His garden’s fruit bunches which are normally plucked in April, will be harvested in late May.

In Nichaul village, about 5 km from the Nepal border in UP’s Maharajganj district, Gautam Poddar, 74, has been fortunate too. Unlike Grand Naine bananas which mature in 10 months in peninsular India, his is a 14-month crop because of four months of winter dormancy. Poddar, a one-time Ranji trophy player for UP, has his 60-acre fruit garden picked in August. 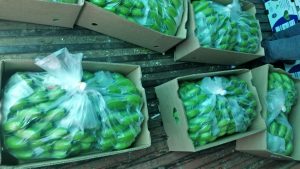 Save for these exceptions the country’s banana landscape is carpeted with examples of lives upended by the sudden enforcement of a lockdown that forced farmers into shock sales – and debt. In the areas that supply to North Indian markets, there is seething anger against wholesalers who own the ripening chambers. In videos posted on social media and a stream of news reports in Marathi dailies from Jalgaon, the district which produces more than 70 percent of Maharashtra’s banana crop, they are accused to raking in unconscionable profit, when they should have shared their gains less inequitably with growers in a spirit of partnership and a display of social conscience.

The wholesalers are saying there are being maligned. High truck rentals, a spike in wages, an increase in fixed costs due to lower utilization of ripening chamber capacity and enhanced wastage caused by erratic offtake on account of virus-related restrictions on hawking have squeezed their margins, they say. They admit that farmers have suffered and prices paid to them do not cover the cost of production, but don’t accept blame for the pain.

Mahavir Subhash Ghogare, 33, of village Bavada in Pune district’s Indapur taluka, had made a deal to sell his banana harvest at Rs 14 a kg on 20 March, a day before the Prime Minister announced the day-long ‘Janata curfew’ on 22 March. The trader sealed the deal with an earnest deposit of Rs 5,000 but could not pick the fruit bunches – 2,100 of them, each weighing 35 kg on average – or about 75 tonnes worth Rs 10 lakh, because of restrictions on transport and movement from 24 March, when the lockdown became effective. Ghogare, who is a graduate in agricultural science with an MBA in agri-business management, says he contacted about 30 traders in Pune and tried selling through two farmers’ producer companies, but failed. He distributed about 15 tonnes free in his village and the neighbourhood. The rest was left to rot in the fields. 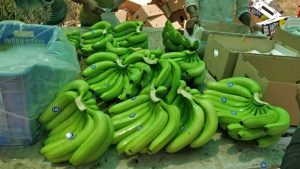 Ghogare had planted export quality bananas and incurred a cost of Rs 4.5 lakh. He has a full-time job at a company that sells specialty fertilizers. His father and brother do the cultivation; he advises them. The family has a crop loan of Rs 18 lakh that carries an interest rate of 13 percent. Servicing the loan and buying inputs for the next season’s planting, when the revenue stream from bananas has all but dried up, will be difficult unless the government provides relief. He is thinking of shifting the banana area to sugarcane which is less expensive to cultivate and where the price is fixed by the government and purchase of cane by sugar mills is assured.

Santosh Lacheta, 43, of Sattalai village in Manaver taluka of Madhya Pradesh’s Barwali district sold bananas worth Rs 4 lakh before the lockdown at Rs 12-13 a kg. After the event, he got Rs 2.5 per kg for 15 tonnes. He does not expect more than Rs 2 a kg for another 4 tonnes. Lacheta follows good agricultural practices. Because his is heavy black cotton soil with clay content of 85 percent – against 40-50 percent which ideal for bananas – he grows his crop on raised beds for proper drainage and root-zone aeration. He has installed drip irrigation and applies nutrients after soil and water analysis.  He neutralizes the alkalinity of soil with phosphoric acid.  The bananas he produces on his 12-acre farm are usually exported to Dubai, Oman and Iran. India’s exports of bananas between April and January this year were 1.40 lakh tonnes against 1.35 lakh tonnes in the previous financial year. The price per kg was also slightly higher. But exports seized up when Lacheta harvested his crop. The price he got did not compensate for his investment and effort. His resentment is palpable. He believes the wholesalers raked it in. 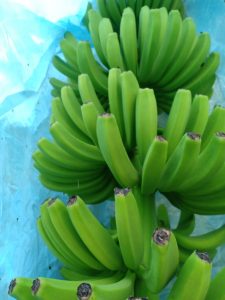 In March, average daily arrivals of bananas at Delhi’s Azadpur mandi, which are from Gujarat, Maharashtra and Andhra Pradesh, dropped to 19.74 tonnes against 96.55 tonnes during the same period last year. The rates were almost double at Rs 2,350 per quintal against Rs 1,150 last year.  In the first three weeks of April, daily arrivals at the mandi averaged 21.17 tonnes and most of the trades happened at Rs 2,350 a quintal. Last April, the daily arrivals were 115.70 tonnes and the rates that attracted the most trades ranged between Rs 1,150 to 1,500 a quintal.  Consumers, of course, paid a higher price – about Rs 40 a kg at Mother Dairy booths.

Not all the bananas that arrive in Delhi pass through Azadpur mandi. Much of the stuff goes directly to the locations of wholesalers where they are ripened with ethylene gas over five days at temperatures of 18 to 20 degrees centigrade. Once ripened, the bananas keep for about four days.

Kalyansing Baburao Patil, who heads Jain Irrigation’s tissue culture and agricultural services department, has been active in creating public opinion against what he terms as exploitation by local traders and wholesalers at the consumption points. A banana scientist, he has been with the company for 27 years. Jain Irrigation had introduced the Grand Naine variety from Israel in the 1990s in Jalgaon to create a market for its micro-irrigation equipment.  By providing high-yielding clones and handholding the growers in efficient agronomic practices, it has made Jalgaon the country’s banana hub with high productivity levels.

Patil says the cost of cultivation is not less than Rs 6 per kg. Though truck rentals shot up to Rs 4 a kg soon after the lockdown, from about Rs 3 before the event, the exemption given for distribution of fruits and vegetables brought the rentals close to pre-lockdown levels within a few days. About 150 to 200 trucks would leave Jalgaon daily for Delhi and other north Indian destinations, he said.  With wholesale prices at Rs 23 a kg, up from Rs 11.50 to Rs 15 per kg last year, he believes traders could have paid farmers at least the cost of production. He reckons that the owners of ripening chambers, which are mostly owned by wholesalers, made about Rs 8 a kg. Some of them may have earned upwards of Rs 2 lakh a day, he asserts.  Patil’s brother Dayal Singh was so offended by the low price offered to him, that he distributed 13 quintals of bananas free on 16 April at Bodwad taluka centre about 40 km from Jalgaon. 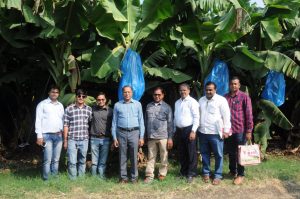 The rate committee of the Jalgaon agricultural produce marketing committee has fixed Rs 600 a quintal as the floor below which farmers should not sell or traders buy. Ramdas Tryambak Patil, 65, President of the committee admits that it’s difficult to enforce the directive because traders can refuse to buy.  Farmers also cannot delay harvesting beyond a point. He says he has not seen the prevailing low rates ever before, and he has been growing bananas all his life.

Pulkrit Batra, 27, whose family has been banana wholesalers for 40 years, points to the logic of the free market to explain price behaviour. He gives a laundry list of costs that are incurred between purchase from farmers and sale to retailers. These have spiked because of the lockdown. He admits that farmers are losing money. From his telling, it appears that everyone else is not.

(All photos on this page courtesy of Santosh Lacheta).