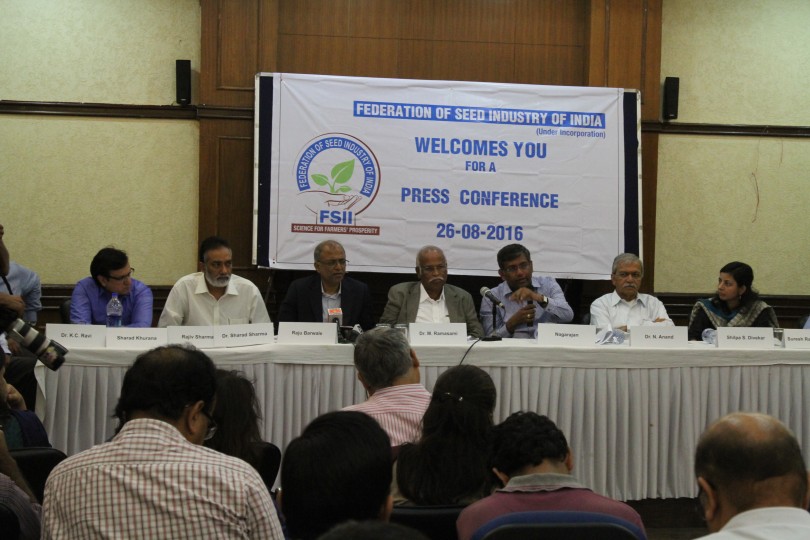 The waiver of patents on Bt cotton by the agriculture ministry through a draft notification in May last year, though withdrawn swiftly, continues to cloud investment outlook in the Indian agri-biotechnology industry. Private industry is not sure that the government will not reinstate the notification, reports Vivian Fernandes.

The Genetic Engineering Appraisal Committee (GEAC) has recommended to the environment minister the commercial release of genetically-modified (GM) mustard. The recommendation is for four years and “lot of conditions” have been imposed said GEAC Chairperson Amita Prasad.

If environment minister Anil Madhav Dave accepts the recommendation, GM mustard will be the second GM crop plant to be approved for cultivation by farmers in India and the first food crop (though India consumes oil derived from GM cottonseeds and milk from cattle fed with GM cottonseed cake). India had approved the cultivation of GM cotton in 2002.

There is no certainty that Dave will accept the recommendation, given the pressure on him from outfits like the Swadeshi Jagran Manch, an affiliate of the Rashtriya Swayamsewak Sangh (RSS), to which he belongs.  In 2010, environment minister Jairam Ramesh had set aside the GEAC’s recommendation to approve commercial cultivation of fruit borer resistant brinjal. He has also re-designated the GEAC from an approval committee to an appraisal committee, vesting the authority to approve cultivation of  GM crops in himself.

The candidate recommended for approval, Dhara Mustard Hybrid (DMH) -11, has been developed by a team of Delhi University scientists led by its former vice-chancellor, the geneticist, Deepak Pental. It has been funded entirely with public money. The National Dairy Development Board (NDDB) has been a major contributor which is why the hybrid has been named Dhara, the brand by which NDDB incentivised oilseeds production in the country by keeping imported prices high under Prime Minister Rajiv Gandhi’s Technology Mission on Oilseeds.

DMH-11 uses the barnase-barstar method of genetic engineering to cross pollinate Indian mustards with high-yielding European mustard varieties. Both genes are derived from bacteria; one is used to create male sterility so that the largely self-pollinating plant can be cross fertilized. The other gene is used to restore fertility. A third ─ bar ─ gene is used to create herbicide tolerance, so that genetically modified mustard plants can be distinguished from those that have not been (as the ones that do not have the gene will wither when sprayed with the herbicide glufosinate).

Pental had submitted the application to GEAC for approval in September 2015. The GEAC has met eight times on the issue. He had also appended a 3,285 page bio-safety dossier. A condensed, 130-page,summary was placed on the environment ministry’s website for a month for public comments in September 2016.

GEAC chairperson Amita Prasad said of a little over 700 comments received, 400 were found to be substantial. These were assayed by a six-member sub-committee of the GEAC. The sub-committee met three times. Its report to the GEAC said DMH-11 was safe with regards to herbicide tolerance, propensity to cause new allergies, toxicity to humans and animals and impact on honeybees and pollinators.

At Thursday’s meeting all 26 members of the GEAC, except five, were present Prasad said. There is some confusion about what transpired. A committee member said the meeting was inconclusive and after the sub-committee’s report was tabled, the GEAC moved on to seven other items on the agenda. The GEAC could not discuss the report in detail because Prasad was called by Dave, the member said. But Prasad contradicted the narrative. She said the committee did arrive at a consensus and the meeting was conclusive.

Anti-GM activists have been opposed to the release of GM mustard, even though it is publicly funded, because they fear that it will pave the way for introduction of other GM crops like insect-resistant and herbicide-tolerant corn and soybean.  They have questioned the yield claims made for DMH-11, faulted it for herbicide tolerance and have accused Pental of being a front for companies selling the herbicide Basta.

The barnase-barstar method of creating mustard hybrids is a superior process than conventional cytoplasmic method (which Rasi Seeds has used for a mustard hybrid to be released for planting during the current winter or rabi season). K V Prabhu, Joint Director (Research), Indian Agriculture Research Institute (IARI) says it enables “perfect hybrid development.” Even if the yield of DMH-11 is not high as claimed, the barnase-barstar method can be used to develop better hybrids by crossing superior parental lines.

This is the second food crop which GEAC has recommended for cultivation. The earlier one, in 2009, was Bt brinjal, but the advise was rejected by then environment minister Jairam Ramesh under pressure from NGOs. He also renamed the GEAC, which was then an approval committee,  as an appraisal committee. Bangladesh has been growing Bt brinjal since 2015.

Canada has been using the barnase-barstar method since 1996 for rapeseed. It sells the oil as Canola, which India also imports.  Cooking oil is one of India’s biggest imports. In 2014-15, India imported 12.7 million tonnes worth $10.62 billion. Mustard yield has stagnated at around one tonnes per hectare on average.

If Dave approves commercial cultivation of DMH-11, India’s oilseeds economy will get a boost. The agri-biotechnology will also see hope. Regulatory uncertainty has forced a couple of major companies to close Indian R&D facilities or downsize them.

BASF, for instance, has closed its rice improvement programme based on GM technology in Tamil Nadu. Advanta, an Indian seeds company, has laid-off rice researchers. Bayer Crop Science has stopped agri-biotech efforts in rice, canola and vegetables. Dupont Knowledge Centre in Hyderabad has scaled down research in plant biotechnology.

Even Monsanto, whose insect-resistant trait is present in almost all of India’s GM cotton crop (which occupies about 90 percent of the country’s cotton area) is shying away from introducing new GM versions or crops. It has withdrawn its application for commercial release of insect-resistant cotton stacked with herbicide tolerance for fear that the technology will be legally copied without its permission. It is also not keen to introduce Bollgard 3, an advanced insect-resistant version of GM cotton, which has debuted in Australia. India will also not see introductions of its GM corn and soybean.

Approval of GM mustard will only partially reassure private companies engaged in agri-biotechnology. A major concern for them is India’s vacillation on respecting intellectual property rights. In May last year, the agriculture ministry virtually waived off Monsanto’s patent on GM cotton. The notification was withdrawn within five days but it has had a chilling effect. The agriculture ministry also slashed the fees payable for the insect-resistant trait by 70 percent. This has resulted in significant value erosion in Mahyco-Monsanto Biotech, an unlisted company which houses Monsanto’s GM traits business in India (though the stock of Monsanto India, the listed entity which sells seeds, has touched a 52-week high).

(Top photo: Launch press conference of a new forum in August 2016 following a split in the Indian seed industry over IPR protection. Photo by Vivian Fernandes).