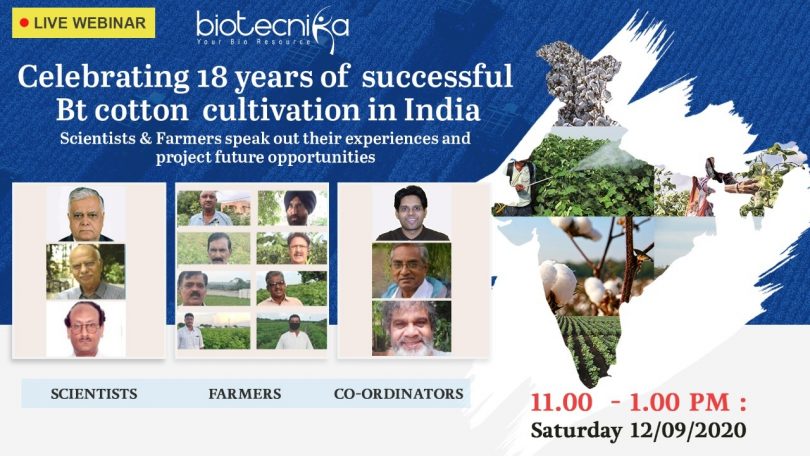 Farmers endorsed Bt cotton technology and asked the government not to deny them access to improved versions of it. They also sought to grow other crops with genetically-engineered traits like herbicide tolerance and borer resistance. The eight farmers from eight states were speaking at an online seminar organised by Biotechnika, a news and jobs portal, and Pro Agri Science Forum, a group of progressive farmers, agricultural scientists and agri-industry executives. The occasion was the 18th anniversary of the introduction of Bt cotton in India, which happened in March this year.

Six of the eight farmers were cotton growers. Balwinder Singh Kang of Rajasthan said Bt cotton trials had happened in his field before it was approved for cultivation in 2002. The worms which bore into cotton bolls and lodge in them were difficult to kill even with about 30 sprays during a crop cycle. They had developed resistance to synthetic pyrethroids. The villages would smell of pesticides. Kang was the first farmer to plant Bt cotton in his area. Now almost all farmers there are sowing it. He needs 3-4 sprays to kill sucking pests but none for bollworms.

Weekly and fortnightly pesticide sprays were the norm when Kannan Klagaram of Tamil Nadu was growing local varieties of cotton about 20 years ago. Apart from people, honeybees and wasps were getting affected. With Bt cotton, he has to do about two sprays against sucking pests. The seed required is also less – 900 grams per acre, as the hybrids are bushy, against 4.5-6 kg of non-Bt seed. Bt cotton is more amenable to mechanisation because of wider spacing. This lowers the cost of cultivation. Klagaram gets 16 quintals of cotton per acre. This can go up to 20-25 quintals/ha with multiple pickings.

Gurjeet Singh Mann of Sirsa, Haryana has shifted from Bt cotton to basmati rice. He was an early convert to Bt cotton because bollworms in non-Bt cotton could not be controlled “even with a prayer.” When the seeds came to Punjab illegally in 2001, he met the farmers who had planted them but desisted from himself doing anything illegal. From 2003 onwards he planted Bt cotton but the load of pesticides, which had reduced initially started increasing because of sucking pest, particularly whitefly, attacks prompting him to shift to basmati. But basmati is a stop-gap, he feels, because farmers are under pressure to conserve groundwater. If Bt cotton can be made resistant to sucking pests, he would shift back. He also wants Bt cotton to be stacked with herbicide tolerance for effective weed management. Mann says HTBt cotton can help control the population of sucking pests as they are hosted by weeds before they migrate to cotton.

Herbicide tolerance is also a trait that Ganesh Nanote of Akola, Maharashtra wants, echoing the viewpoint of Kang, who says workers are not available even for wages of Rs 300-400 a day. Pink bollworm resistance is a challenge for farmers in his area, Nanote said and hoped that newer generation GE technologies would be approved for cotton. He wanted GE technology to be available also in vegetables, maize and pulses.

Velakanni Reddy of Telangana said in 2002 he got a one kg sample of Bt cottonseed and the yield was 22-24 quintals per acre. He began large-scale cultivation of Bt cotton from 2003 onwards. Reddy who also has 85,000 broilers and 50,000 egg-laying hens, says he was “expecting Roundup Ready technology (for herbicide tolerance) but the government is not permitting it.” His other worry is Fall Armyworm in maize. Pesticides are not effective against it and insect-resistant Bt technology is the only proven cure.

Sudhanshu Kumar, a post-graduate in history from Delhi’s Hansraj College, has a modern farm in Bihar’s Samastipur district. He drip-irrigates his banana and litchi garden with remote control. He also uses drones to maps his farm’s soil. Kumar says papaya in Bihar is susceptible to fungal diseases and that has affected production. Pulses are ravaged by borers. The state is the largest producer of rabi maize. If GE technology were available for these three crops, Bihar’s farmers would enjoy higher income.

From West Bengal, Umesh Chanda Debnath made a forceful plea for Bt brinjal. He said the vegetable was profitable but the fruit and shoot borer has made it expensive to cultivate. Bt brinjal can reduce pesticide costs considerably He wanted India to follow Bangladesh and allow its cultivation.

“I spray brinjal every third or fourth day for fruit and shoot borer and I still lose 50 percent of my crop. We are not selling vegetables. We are selling poison. It hurts my conscience,” said Kang, while asking the government to permit the cultivation of Bt brinjal. Farmers need technology, not loan waivers, he said. He hoped he would be able to cultivate GM mustard and GM maize too.