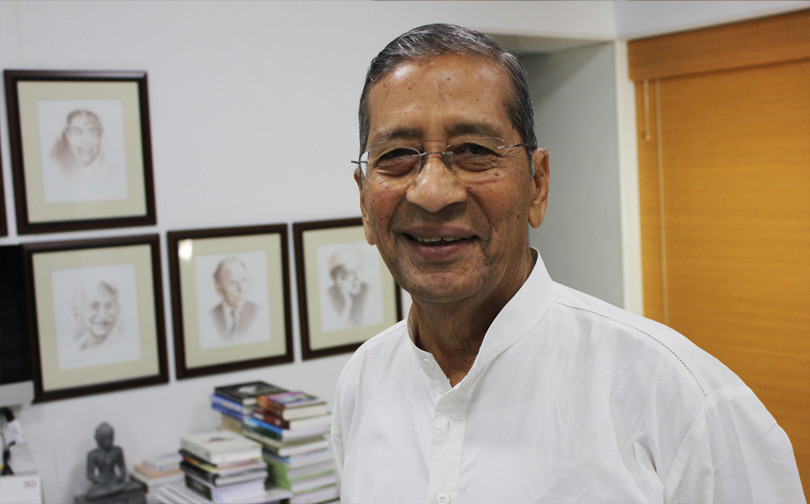 The founder of Jain Irrigation combined tradition with technology. His life guides were Mahatma Gandhi, Jawaharlal Nehru and JRD Tata, who respectively embodied harmony with nature, grandness of vision, and enterprise with a social conscience. Vivian Fernandes profiles the evangelist of drop-by-drop irrigation who died on 25 February at age 78. This piece was first published in the Financial Express on 9 March.

Bhavarlal Hiralal Jain was an advocate of more-from-less agriculture which the Economic Survey has advised for India, where industrialisation and climate change are shrinking cultivable land, and a growing population is increasing the demand for food and fibre.

The founder of Jain Irrigation Systems died on 25 February, a day before the survey was tabled in parliament, at age 78. Its chapter on agriculture is a vindication of his life-long efforts at evangelising drop-by-drop or drip irrigation.  He was not the first to bring the technology to India but was its most forceful proponent.

The survey wants India to use water efficiently. India has less water per person than Brazil, it says, but uses 90 percent of its renewable freshwater compared to Brazil’s 60 percent. Subsidies on power must end to curb water wastage. Cheap power makes India a net exporter of water through commodities like cotton, sugar and soybean, while China is a net importer of water through soybean, cotton, meat and grains. According to the survey, a government study in 64 districts of 13 states found yield increases of 45 percent in wheat, 20 percent in chana or chickpea and 40 percent in soybean with micro-irrigation.

Jain combined tradition with technology —  an example for right-wing outfits like the Swadeshi Jagran Manch. The hill in Jalgaon on which his office stood, was an advertisement for rainwater conservation. It was barren but teems with trees and undergrowth. There is a goshala (cow shelter) on way, and Gandhi Teerth, a multi-media exposition and a centre for Gandhian studies further up.  On a wall in his office were framed sketches of his guides: Mahatma Gandhi, Jawaharlal Nehru and JRD Tata, who respectively embodied harmony with nature, grandness of vision, and enterprise with a social conscience. Like the frugal irrigation technology he sold there was no hint of excess on his frame. His office was painted white, the preferred hue of the Swethambara Jain sect. It had the serenity of a temple — he exuded it — and the airiness of an open office. He was the presiding deity. He was held in reverence like Indian patriarchs are. Some may have found it excessive. Tones were hushed. Visitors had to remove shoes.  Conversations with them were usually video-recorded. He was called Bhau, Marathi for brother.

The survey makes a distinction between crops that are financially profitable and those with greater social contribution.  It wants pulses and oilseeds to be supported with assured procurement and minimum prices because they are more nutritious, use less water and enrich the soil with atmospheric nitrogen (which means lesser consumption of subsidized urea). If a monetary value were assigned to these gains, the social returns of chickpea would outweigh the cash profit by Rs 2,662 per hectare. In percentage terms, chickpea’s social returns per hectare, the survey says, was 101 percent higher than the financial gain for the three years ending 2010-11. Blackgram or urad and lentil or masur followed. In the case of wheat, ordinary rice, basmati and sugarcane the social returns were negative.

The same could be said of Bhavarlal Jain’s enterprise. On the day he died, Jain irrigation’s market capitalisation was about Rs 2,500 cr. That does not account for the fortunes of farmers he flattered. In March last year, this correspondent met a former chaiwallah (yes, there are more than one!) and a thwarted school teacher who said they earned more than a crore rupees in annual income by growing bananas on own and leased land using a combination of tissue culture, drip irrigation and fertigation (the application of nutrients through drips).  Jain was one of those socially-driven entrepreneurs who truly made India.

Jain had to create prosperity for farmers to buy drip irrigation equipment. He introduced the Grand Naine variety of Honduran bananas through an Israeli company specialising in tissue culture in the early 1990s. Tissue cultured seedlings ensure uniform, disease-free growth and high yields. The company sells 60 million 10-month old seedings, grown initially in test tubes, for Rs 13 each, which is four times the rate of conventional ones. This variety fruits within a year, unlike traditional ones like Srimanti that take 18 months. Another advantage is two extra annual harvests, before replanting, through ratooning.

India is the world’s largest banana producer, though it does not count as an exporter. Maharashtra is the second largest producer, and if Jalgaon district were a state it would rank fifth in production. It produces three quarters of Maharashra’s output. Within Jalgaon, talukas like Raver are almost entirely banana country. Jain deserves much of the credit.

The survey also emphasises productivity or higher output from frugal use of resources like fertiliser and pesticides unlike high-input, hig0h-output agriculture of the Green Revolution. Genetically modified crop technologies, the survey says, have ‘significant net benefits.’ Evolved regulation is needed to allay public fears so they can be deployed.

The Budget does not abide by the Economic Survey’s blueprint, which is usually the case. It has increased the outlay for agriculture. It wants to double the income of farmers in five years, but strangely emphasises low-yielding organic farming, which can more than make up only through higher prices. That requires maintenance of a log of chemicals used for trust and traceability, marketing infrastructure and a quality-preserving supply chain.

Whether it is organic or non-organic agriculture, linkages with companies or cooperatives that operate on the basis of shared prosperity can create better value for farmers. ‘My empathy for the farmer had gone a long way in building equity for me,’ Jain said. He skimmed some of it. He had the right.

(Top photo: Bhavarlal H Jain with portraits of his life guides, including his wife. By Vivian Fernandes on 1 April, 2015).