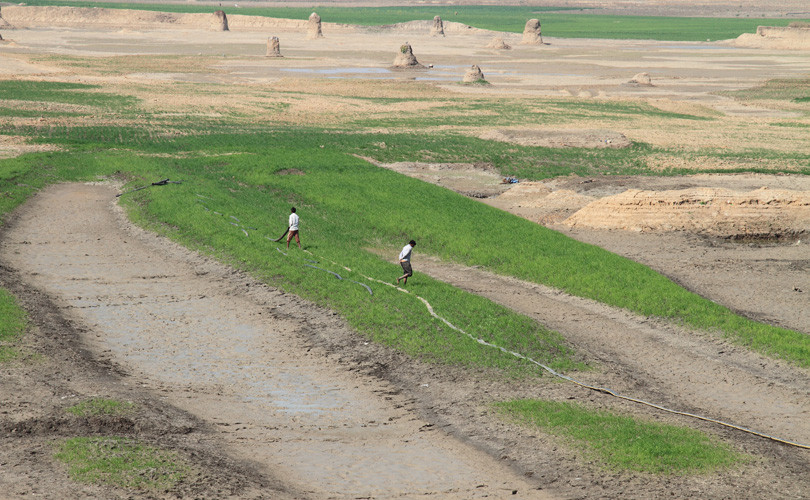 With two monsoon failures in a row economic life in Bundelkhand has been laid low, reports Vivian Fernandes after a two-day tour of four districts, mainly in the Madhya Pradesh part of the region. The administration must take emergency relief measures so that the drought does not leave a lasting impact on families. Beyond that it must ensure that the region is better prepared to cope when rains fail the next time.

Distress was not apparent as one drove through four of thirteen districts of drought-hit Bundelkhand.  Stretches, ploughed but not sown, interspersed with swathes of green and yellow hid it from view.  But it emerged from the conversations.

Wheat and mustard was being grown with the trickle of water from tube wells in areas abutting ponds, lakes and rivers which are drying. A mid-January shower has helped. But it is unlikely that wheat sown as late as December will yield full-sized grains as the heat builds up. Yields and quality of both crops will suffer. It is doubtful whether farmers will recover little more than the money they have invested.

Life is nasty as the best of times in this cauldron of caste oppression, which the   previous generation would remember for competitive massacres (Behmai) and romanticised dacoits (Phoolan Devi). But four seasons of lost crops can lay life low when there is little other than agriculture to fall back upon, infrastructure is poor and capacity to cope is attenuated.

Findings released by Swaraj Abhiyan last November of a survey of 1,206 households in 108 villages across all seven districts of Bundelkhand in Uttar Pradesh portrayed a dire situation with many respondents reporting they were unsure of the next meal, that they frequently skipped vegetables, that they ate rotis with salt and chillies, that dal was an infrequent accompaniment, and a few even saying there were days during the previous eight months when they had eaten fikara or rotis mixed with an unpalatable small millet.

Swaraj Abhiyan is a political organization set up by Yogendra Yadav and Prashant Bhushan, the expelled founders of the Aam Aadmi Party.

One did not come across such pitiable conditions during a two-day tour of Jhansi in Uttar Pradesh and Tikamgarh, Chhatarpur and Panna districts of Madhya Pradesh, but that may be because one did not go too far from the main roads and focused on farmers, not non-agricultural workers.  Swaraj Abhiyan was conducting a survey of the five drought-affected districts of Bundelkhand in Madhya Pradesh across 64 villages at the same time. (Satna was left out because it has not been impacted). The surveyors one spoke to reported zero to 30 percent sowing. How deep the distress is will be known when the findings are released.

Diesel sales at a petrol pump at Luhari, in Jhansi’s Mauranipur tehsil, conveyed a mixed picture. The quantity sold between October and December last year was 123,000 litres less than in the corresponding period the previous year.  But between  June and September, sales were higher in three of four months over the year-ago period. Pump manager Raju Pal said agricultural consumption (for tractors and pumps) had indeed declined. But trucks and buses had more than made up as diesel in UP was cheaper than in MP by Rs 2.41 a litre.

‘In the past year 415 farmers have killed themselves in the Uttar Pradesh side of Bundelkhand,’ says Shiv Narayan Singh Parihar, a leader of the Bharatiya Kisan Union (Bhanu), a breakaway faction of the body founded by the late Mahendra Singh Tikait, which used to bring Delhi to its knees in the eighties and nineties with massive farmer rallies.  ‘In the past year we have done 32 chakka jams (highway blockades) but the government is not willing to accept that farmers are dying because of the drought,’ Parihar said in the languorous manner of the bhang-influenced (he was not).

At Rajpura village in Jhansi’s Bangra block, farmers were growing crops on the bed of the Pachwara dam. The 30-foot high dam just had traces of moisture. Even here, farmers were drawing water from tube wells.

At the edge of the dam, Parmanand Kushwaha, a share cropper, was irrigating two acres with water from a tube well belonging to the land owner. ‘We sowed thinking if we get wheat it is fine, if not we will get fodder at least.’

His neighbour, Santosh Kumar Srivas, had sown wheat in four of ten bighas (three bighas is an acre). He had not planted during the previous kharif season.  A 40-feet deep tube well irrigates his field. ‘Only a scattering of fields have been sown,’ by those who have water in wells, he said.

Unlike Marathwada in Maharashtra which faced a drought last year, Bundelkhand has poor infrastructure. Repeated droughts have reduced its ability to cope. Records at Saprar dam in Jhansi’s Bangra block, reveal severe monsoon deficiency in seven of the past fifteen years. The first three years of the past decade had good annual rainfall of between 1,064 millimetres (mm) and 622 mm. In the next four years it ranged between 265 mm and 347 mm.  The year 2008 received 965 mm, a level not seen since. In 2014, it rained 290 mm. Despite the severe shortfall, people could cope, because the reservoirs had been recharged by 827 mm rainfall the previous year.  While last year’s rainfall of 327 mm is slightly higher than that of 2014, it is causing greater hardship because the reservoirs are depleted. The dam has not reached the full supply level of 735 feet (above mean sea level) since 2013. The maximum it touched in the past two years was 725 and 722 feet respectively.

Water being scarce, is selling at a premium. At Alpur in Tikamgarh, Brijlal Yadav, whose luxuriant moustache is more lush than wheat and mustard in his fields, was paying Rs 3,000 per irrigation for nine bighas. He has to water the wheat crop thrice, which will set him back by Rs 9,000. ‘I have taken loans from here and there and will repay with the harvest.’ It seems like game of luck.

Harbal Singh Yadav of Palara village in Tikamgarh district said 22 people in his extended family were living off 15 bighas. The crop during 2014 kharif was not bad, he said. He got 30 quintals of wheat. Yields in this part of the country are about two-three quintals a bigha ─ not high. He has also sown mustard, which has been attacked by pests, and bursine, a kind of grass which is mixed with dry bhusa (or chopped wheat straw) to make fodder palatable. He was paying Rs 500 to irrigate a bigha. Last year he had got Rs 3,000 in relief from the government. He was awaiting this year’s instalment.

At Jijh village in Panna district, a little distance from the Ken river, Rammohan Tripathi was planting onions on three acres of land leased on a equal profit-sharing basis. Onion requires a lot of water but Tripathi was banking on a 100-foot deep tube well to bail him out, though wells on the banks of the nearby Madasan river have failed. The urad (black gram) and til (sesame) he had sown in the kharif season had come a cropper. ‘People are not going hungry, but more people are leaving for the cities. This year there is greater majbhoori (compulsion),’ he says.

At Pagara village in Chhatarpur’s Bijawar tehsil, there has been no farming for the past three years, says Rajabhai

Ahirwal, nursing an infant. Sunita Ahirwal says the men, including her brother, are working in Delhi as masons or helpers on construction sites. Drinking water has to be fetched from more than a kilometre away as the hand pump at the habitation has gone dry.

One saw locked houses too at Kupi village, also in Bijawar, which has a sizeable number of adivasis. The village is in a valley surrounded by hills. The water level is high in some of the wells but it will soon deplete, residents say. One well had dried up. Chhotalal Saunr, a young adivasi says they have to share five acres among three families. Some members have migrated to Delhi for work. Others sell a root called gundla dug out of a river bed.  They gather about 10 kg a day, which sells for Rs 20 a kg.

Uttar Pradesh had ordered special measures for the drought affected districts of Bundelkhand last December. Madhya Pradesh has not declared any district as drought affected. It supplies subsidized grain, but has not gone out of the way to organize wage work or provide drinking water. Compensation is being provided but depends on the whims of the patwari. Relief measures will be needed as fodder is selling at a high price and available drinking water may not see the summer through. Beyond relief measures, both states must ensure that Bundelkhand is better prepared for the next monsoon failure.