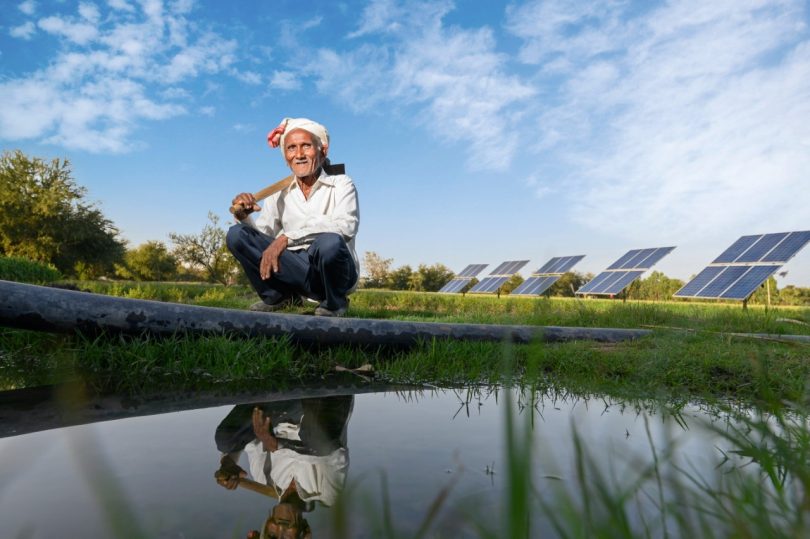 The Finance Minister has announced an ambitious programme to solarize 2 million grid-connected pumps and 1.5 million diesel pumps. If the surplus power produced by the grid-connected pumps is not bought back at attractive rates, farmers might overwater their crops or grow crops that need more water, leading to depletion of groundwater, reports Vivian Fernandes

Pravinbhai Punjabhai Parmar, 30, says his cooperative has sold 2.40 lakh units (kWh) of solar electricity to a Gujarat state utility since May 2016 and earned Rs 14.35 lakh. It has also sold irrigation worth Rs 16 lakh to fellow farmers who do not have tubewells. The nine members of the cooperative who together own 38 bighas (8.5 hectares) not only reduced their cost of irrigation in averted diesel use, they also got a neat stream of revenue to supplement their meagre income – about Rs 1.5 lakh each annually – growing paddy, millet, wheat and tomato. 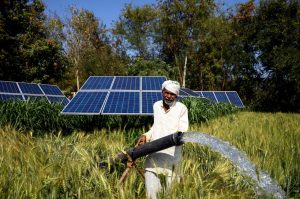 Parmar, 30, is secretary of the Dhundi Saur Urja Utpadak Sahakari Mandali (or Dhundi Solar Energy Producers Cooperative). It is based in Kheda whose milk producers’ union, named after the district, became a model for cooperative dairying under the Amul brand. Dhundi has also inspired similar cooperatives under the state government’s Suryashakti Kisan Yojana (SJY) launched in June 2018 to get 12,300 farmers linked to 137 farm feeders to switch to solar irrigation. It has also become the template for one of three components of the central government’s Kusum scheme.

Dhundi has 50 pumps. Except for one which is electrified, the rest run on diesel, as their owners were unable to comply with the procedures for obtaining grid connections. It takes five litres of diesel or Rs 350 to irrigate a bigha. Wheat needs five irrigations, bajra seven, and tomato more. A pump needs 20 units of solar electricity to water a bigha. The opportunity cost of those 20 units, or the price the members of the cooperative would have fetched if they had sold those units to the utility would have been Rs 92.60 or Rs 64.80. The difference is because of the buyback rate. The Gujarat utility which signed the power purchase agreement in May 2016 with the first set of six members offered Rs 4.63 a unit for 25 years. In August 2017, it offered the next set of three members a rate of Rs 3.24 a unit for the same duration. If the farmers had operated electric pumps, the utility would have charged them 60 paise for a unit of power that costs it eight to 10 more, says Tushaar Shah, who headed the team at the International Water Management Institute (IWMI) that worked on this model, helped set up the cooperative and arranged the power purchase agreements. 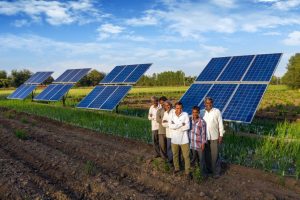 Members of the Dhundi cooperative.

Getting a bunch of farmers to install solar pumps was quite a task for IWMI, which is headquartered in Sri Lanka. It is part of an international consortium of agricultural research institutions called CGIAR, two of which ushered in the Green Revolution in wheat and rice. IWMI’s mandate is to develop solutions for sustainable use of water in agriculture.  Early in the last decade IWMI and its senior fellow Shah had advocated the separation of the grid supplying three-phase electricity to irrigation pumps from the one lighting up homes. The farm grid would provide limited hours of subsidized three-phase electricity during the day and at night alternately every week. The home grid would have uninterrupted power for lighting. Gujarat adopted the model and called it Jyotirgram.  Limiting the duration of supply would not only reduce the power subsidy bill but also help conserve groundwater.

Parmar and his neighbours had seen solar lamps but were unsure of solar pumps working reliably and consistently. But IWMI sweetened the deal with generous contributions from the Tata group and a CGIAR research programme on climate change. The farmers invested Rs 8.40 lakh in nine pumps of 52.5 hp and solar panels that can produce 71.4 units of electricity at peak capacity on clear, sunny days. They got a system worth Rs 68.24 lakh, including a microgrid of 4.2 km and a 100 kVa transformer. In addition, for two years IWMI paid them an extra Rs 2.50 a unit as green energy and groundwater conservation bonus.

Water buyers, who don’t own tubewells, also gained.  The solar pump owners charged Rs 250 an hour, a steep discount of 50 percent. (They charge Rs 300 now). About 10 diesel pumps in the vicinity of the solar pumps became uncompetitive and quit the market. The cooperative’s members still made more money at Rs 12.50 a unit than they would have if they had sold that power to the utility. Groundwater depletion is not an issue in the village because the aquifers are recharged by the Mahi river canal. 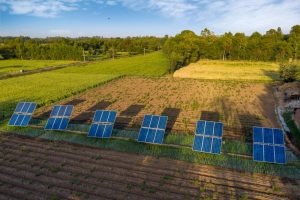 Shah says the power purchase arrangement is vital to conserving groundwater. Otherwise, farmers will keep their pumps running as there is no operating cost. They will overwater their crops or grow crops that need more water.

Under Gujarat’s SKY programme, farmers pay just 5 percent of the capital cost. The remaining 60 percent is subsidized equally by the central and state governments. Another 35 percent is a loan contracted from Nabard, the agricultural refinance bank, by the state government on behalf of the farmers at low rates of interest. A 25-year power purchase agreement is signed if more than 70 percent of farmers connected to a feeder form a cooperative and switch to solar. For the first seven years, they are paid Rs 7 per unit, of which the state government retains Rs 3.50 for seven years to repay the loan. Thereafter, farmers are paid Rs 3.50 per unit of electricity supplied.

Farmers have an incentive to opt for SKY because they are assured of 12 hours of uninterrupted power. (The rest get eight hours of it). The grid evacuates all the power, while the farmers draw from it. This helps in running the pumps in the morning and the evenings when solar voltage is low. The farmers are paid (or billed) for net usage.

So far 3,100 tubewells connected to 76 feeders in Gujarat have been solarised. (Gujarat has 9,500 farm feeders and 1.6 million tubewells). They have generated 62.6 million units of power and consumed 23.4 million units.

There are 10 million diesel pumps in the country. There is a long waitlist to electrify them. There are 20 million electric pumps as well. They account for 17 percent of the country’s annual electricity consumption. Solarisation will reduce the subsidy bill and also provide income to farmers. The Finance Minister has set a target of solarising 2 million diesel pumps and 1.5 million electric pumps.

Sanjio Phadnis, Senior Manager at Jain Irrigation, which claims an installed base of 30,000 pumps, says a solar pump costs Rs one lakh to 1.25 lakh per horsepower. A 5 hp pump would cost between Rs 5 to 6.25 lakh (those of lesser efficiency cost about Rs 90,000 per hp). Diesel pumps are cheaper, but solar pumps can match the cost in five years if running and maintenance costs are considered. 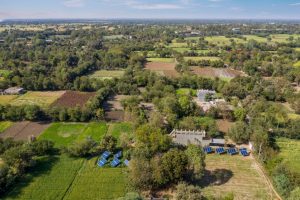 The generous terms of the central government’s scheme could give impetus to solarisation. Despite 60 percent subsidy from the Rajasthan government smallholder farmers are not enthused about solar pumps, says Padam Jain, who was engaged in organizing about 15,000 of them in Bundi district through Srijan, an NGO. The 5 hp solar pump which he installed in 2017 has given near trouble-free service he says. He could not install an electric pump because of the long wait time. But grid power is erratic and keeps farmers awake at night every alternate week. Rajasthan enjoys about 325 clear sunny days a year. A power buyback arrangement should encourage farmers to opt for solarisation.

Costs are dropping because of acute competition for government orders. Dinesh Patidar of Pithampur (MP)-based Shakti Pumps (which has an installed base of 1.5 lakh pumps) says for the Maharashtra tender rates as low as Rs 2.30 lakh for 5 hp pumps were quoted. Suppliers counted on economies of scale and a steep reduction in the cost of installation and servicing.

Shah says it costs the Gujarat government about Rs 55,000 per electrified tubewell in annual subsidy. The subsidy would be higher in Punjab where power is supplied free to farmers and groundwater usage is more. He says the buyback rates should be in the range of Rs 5-6 a unit, including a bonus for saving groundwater. That will give farmers an incentive to install micro-irrigation systems as well. But the poor financial health of many distribution companies and the weak demand for electricity owing to a slowing economy are worries.

(This article was first published in the Financial Express. All photos of Dhundi cooperative provided by Pravin Parmar)