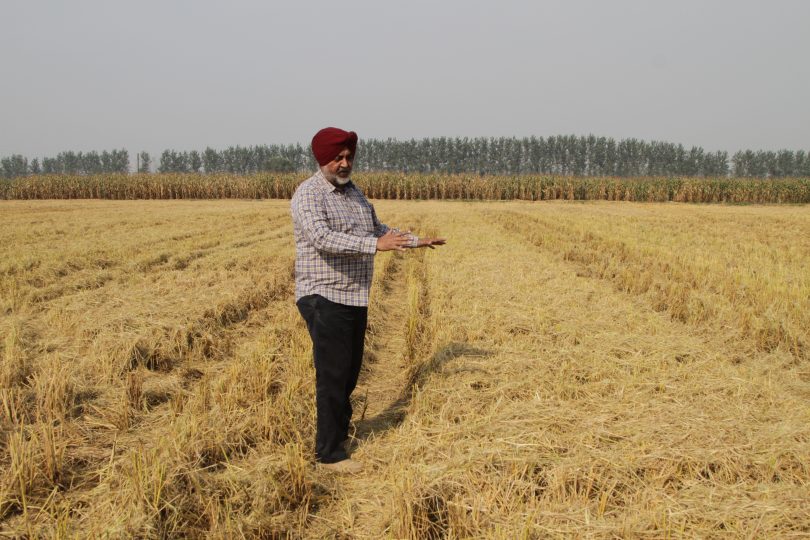 Vivian Fernandes reports that the use of the Happy Seeder to sow wheat together with the harvesting of rice with combines equipped with straw spreaders is the best way to tackle field fires in Punjab and Haryana. Suggestions for the use of straw to make paper, cardboard, animal feed and compressed natural gas are impractical and undesirable.  This report was first published in www.thequint.com.

A visit to some villages in Karnal and Ludhiana districts of Haryana and Punjab respectively showed extensive adoption of no-burn-no-till agriculture indicating that with access to the appropriate machines, guidance and enforcement of the law, the issue of paddy crop waste can be managed without polluting the air and with profit to farmers. 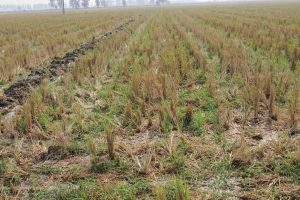 But it is also important to cut through the smog of ill-informed news reports and commentary that attribute paddy stubble and straw burning to a law that prohibits the seeding of rice nurseries before 10 May and transplanting of rice before the middle of June. The law was enacted to reduce loss of groundwater to evaporation when summer is at its peak. Influential voices like those of the agricultural scientist MS Swaminathan, who is credited with ushering in India’s Green Revolution in wheat, and NITI Aayog Member Ramesh Chand have also sent mixed messages that can affect the adoption of no-burn-no-till agriculture.

In a series of tweets, Swaminathan said farmers should not be blamed for burning paddy crop residue. This goes against the ‘polluter pays’ principle. It may not be politically expedient to blame them but it is not wise to condone irresponsible behaviour either.

Swaminathan has also proposed an impractical solution. He says ‘rice bio-parks’ should be set up to process the straw into paper and cardboard. Punjab produces about 20 million tonnes of paddy straw of which about 15.5 million tonnes is burnt. To rake, bale and transport all of it from 3 million hectares within a timeframe of three weeks during which wheat has to be planted, is logistically daunting.

There is also the issue of storage. Straw from 400 acres needs one acre to store, says Punjab’s Agriculture Commissioner Balwinder Singh Sidhu. If not covered, episodic showers that occur in December and January can quicken the degradation of straw.

Chand’s suggestion that straw be converted into compressed natural gas is also impractical for these reasons.

Baldev Singh Dhillon, the Vice-chancellor of Punjab Agricultural University (PAU)  is fine with “ex-situ management” of rice crop residue “for the time being but ultimately it must be managed in-situ” to nourish the soil depleted by the extraction of so much grain. 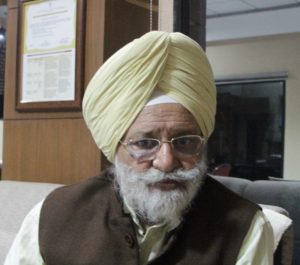 It is possible to plant wheat without removing or burning paddy stubble and straw because of two devices. Conventional combine harvesters cut paddy about a foot above the ground. After threshing, they leave behind loose straw in rows as they advance. Spreading this straw evenly over the field by hand is tedious and expensive. But new combines cut paddy closer to the ground. They are also equipped with a device that chops the straw after threshing and blows it evenly across the field. Combines are required by regulation to be mandatorily equipped with straw spreaders but the rule is not enforced.

A Happy Seeder developed by PAU in 2007 but put into active operation from 2014 onwards makes slits in the field for sowing of wheat seed,  after parting the straw cover. The straw mulch helps retains moisture, suppresses weeds and allows beneficial insects and microbes to thrive. Over time it degrades and enriches the soil.

Manoj Kumar Munjal, 46, of Taraori village in Karnal district’s Nilokheri tehsil practices no-burn-no-till agriculture on 130 acres, 80 of which is leased. He has not been ploughing his fields since 1995 but was burning loose straw. Since 2010, he says, he has not set his fields on fire. He uses the Happy Seeder. 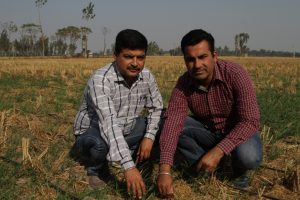 His friend Vikas Chaudhary was introduced to the Happy Seeder during a demonstration by CIMMYT, the Mexico-based institute from where Normal Borlaug initiated the Green Revolution in wheat. CIMMYT had a programme called Cereal System Initiative for South Asia. He has been a convert to no-burn-no-till agriculture since then.

In Ludhiana’s Bagga Khurd village, Jagdev Singh Toor, 63, has not been burning paddy crop residue for six years. For 12 years before that, he would burn loose straw but not the stubble.  He finds using the Happy Seeder beneficial:”karcha kum proft zyada,” he says compressing the second syllable of the word ‘profit.’

In nearby Garha village, Harwinder Pal Singh Gill, 39, came to use the Happy Seeder by chance. An impending visit to Canada in 2016 left him little time to prepare the fields for wheat. He took a chance with the Happy Seeder and has not regretted the decision.

Conventionally, farmers prepare the fields for wheat planting by running the disc harrow, the plough and a planking device multiple times. But this exposes the soil and dries it. The pores made by roots of the previous crop are also destroyed. If the stubble is set of fire, insects and microbes die. It is not only costly but also wasteful, as nutrients in the straw go up in smoke.

An article jointly published by several agricultural scientists and engineers in August in the respectable Science journal said farmers saved on average Rs 5,300 a hectare if they planted wheat without tilling the field. The article was based on a survey of farmers and an analysis of various studies.

If the villages one visited in Karnal and Ludhiana could adopt no-burn-no-till agriculture, there is no reason why the rest of the villages in the two states cannot do so. ML Jat, who oversees ‘sustainable intensification’ for CIMMYT in India, says farmers need guidance and a mindset change. They also perceive a risk in no-till agriculture when there is none. This fear needs to be addressed. 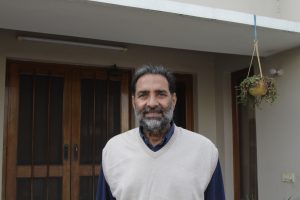 For no-burn-no-till agriculture to catch on, combine harvesters with the straw spreading device, and Happy Seeders must be readily available. This is because wheat is ideally sown in the last week of October and the first week of November. The villages that one visited have been adopted by BISA and ICAR’s Central Soil and Salinity Research Institute. They provide machines sponsored by corporate trusts and their staff guides the farmers.

BISA’s Harminder Singh Sidhu discounts concerns that the Happy Seeder is unaffordable. A machine costing about Rs 130,000 will pay for itself, if hired, within two seasons.

Is there a yield penalty in the use of the Happy Seeder? PAU’s Director of Research, Navtej Singh Bains, says there may not be a yield advantage initially and there even may be a yield penalty due to “inexperience.” Farmers will have to learn moisture management in straw-covered wheat fields from experience. He says such “small bumps’ during technology transition will have to be surmounted.

There has been a slight increase in stubble burning incidents in Punjab this year.  Official figures show there were 50,967 events between 23 September and 19 November this year compared to 50,576 during the year-ago period. “Late transplanting may be one reason but a small reason,” says Sidhu responding to reports that blame Punjab’s Preservation of Sub-soil Water Act of 2009.

A PAU note on ‘Clearing the Smog over Paddy Transplanting Date,’ says the groundwater table is falling by 50 cm a year across the state and by almost double that rate in the central districts. According to Punjab’s economic survey, the number of tube wells has increased nearly 48-fold to 1.47 million over the past 50 years. In 44 of 150 blocks, it says, the water level is below 25 metres.

“Our worry is that these influential voices (who blame late transplanting) can seriously set back the groups attempting to address these (crop residue management) issues through technology development and dissemination,” PAU notes.  Those who cite late transplanting for stubble-burning fail to note that the share of short-duration varieties in Punjab’s rice area has increased from 32.6 percent in 2012 to 81.7 percent in 2018. 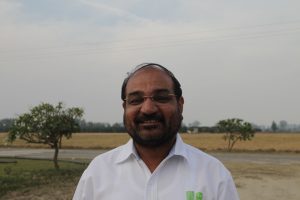 PAU says it is necessary to stick to the transplanting date of 20 June so that farmers do not revert to long-duration varieties that require more irrigation. The reprieve of one-week this year has resulted in just this: area under short-duration varieties fell by nearly 14 percentage points to 68 percent. The date for rice transplanting was pushed back by a week to 13 June this year from 20 June last year and 15 June during the previous four years, he says.

On the Supreme Court’s direction, Punjab and Haryana are offering cash incentives to farmers to not burn paddy stubble. But incentives will not work if the law prohibiting crop residue burning is not enforced. Farmers who refuse to get out of their comfort zone through persuasion will have to be goaded into making the effort.