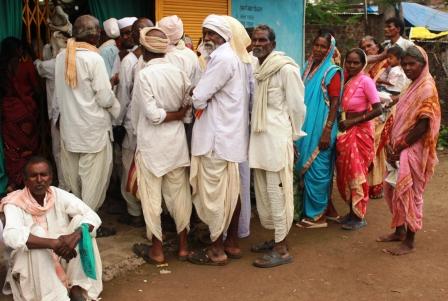 Using price policy to achieve welfare goals like cheap or affordable food imposes costs on farmers. The government must free up agricultural commodity markets and provide income support to the poor through direct transfers of cash to their bank accounts to the extent possible. A briefing by Vivian Fernandes.

AS a group, farmers are the biggest voting bloc. Rural constituencies in the Lok Sabha vary between 490 and 342 depending on the criterion used. . Either way, they are by far the majority in a 543 member House. Members of Parliament are keen to be seen as defending the rights of farmers. Any talk, for instance, of bringing farmers within the income tax net draws instant indignation. Parties profess to champion the interests of farmers; in practice they harm them.

The rationing of food grains began in Bombay (as it was called) in 1939 to deal with wartime shortages.  By 1946, 771 cities, towns, and some rural areas facing persistent food shortages were covered. Rationing was discontinued temporarily but was reinstated after Independence, in 1950. By 1961, there were 51,000 fair price shops.  The availability of American food aid, ensured adequate grain availability and the focus shifted from providing food relief, to making grains available at ‘fair’ prices and check speculation. In 1965, the Food Corporation of India and the Agricultural Prices Commission were established.  The government started procuring at floor prices and buffer stocking began.  Since then, the apparatus has grown and now extends to 5.3 lakh fair price shops, which will reach out to 820 million people when the new food security law is fully implemented.  Some states, like Tamil Nadu, have brought entire populations within the ambit of the public distribution system (PDS) and besides cereals provide cooking oil, pulses, salt, matches, candles, text books and school note books.

No civilized nation, certainly not a liberal democracy, can allow its people to go hungry.  With economic liberalization and fast economic growth, concerns about inequality and inclusivity have grown. But the system of government agencies procuring huge quantities of cereals, storing them centrally in a few hundred warehouses and dispatching them to millions of intended beneficiaries at highly subsidized prices is wasteful because it does not harness the efficiencies of the market. It also makes a leap of faith in assuming that people are not ethically flawed.  The World Bank has estimated that only 41 percent of grain reached those for whom it is meant.

The process inflicts grave tangential damage.  To pare the subsidy bill, the government imposes restrictions on the internal movement of grain or on exports. To illustrate, in 2010, the Andhra government forbade rice from being transported by train outside the state even though Kerala was willing to pay a higher price, that too for rain-affected rice. This coupled with a ban on exports, forced prices in Andhra below floor prices set by the government.  Angry farmers declared a ‘crop holiday’ and vowed to keep their land fallow rather than cultivate it. Pressured by this event, which was without precedent, the central government relented and allowed one million tonnes of rice to be exported. Still, the area under paddy fell by 0.8 million hectares the next year. (see study)

Three years before this, in October 2007, the government blocked export of wheat and common rice to cope with rising global food prices. The spike was caused by increased demand arising from strong economic growth worldwide, and especially in China and India.  Between 2003 and 2007, world prices of maize and wheat doubled. Rice prices jumped to unprecedented levels and doubled in the first quarter of 2008. As oil touched a high of $147 to a barrel, the United States and the European Union began subsidizing bio-fuels. Farmers diverted land massively to crops producing ethanol. In the United States, a third of the maize crop was devoted to ethanol production in 2008, from five percent a decade before. Adverse weather in Australia, China, India, the EU and USA affected harvests.  India used subsidy, trade and tariff policies to cope. The contribution of food prices to overall inflation was less than twenty percent, but the government was repeatedly questioned on its price management policy in Parliament.  It could not lift the export ban without being accused of being uncaring; the ban persisted much beyond its useful life. It was lifted only in 2011, by when, massive stocks, beyond the requirements of rationing, had built up.

Depressed prices mean lower income for farmers; surely not an equitable way of rewarding honest effort. India’s farmers have done a good job of food production. Since the 1950s, there has been more than a three-fold increase in our population. Food grain production during this period has seen a five-fold jump. In a way farmers cross-subsidize poor consumers, when the burden should fall on all citizens who are taxpaying and not one section of them. To persuade farmers to grow more, the government resorts to paying them higher support prices.

The use of price policy to augment the purchasing power (or income) of the poor, has resulted in a cascade of side effects, which the government tries to relieve symptomatically, without attempting the essential cure.