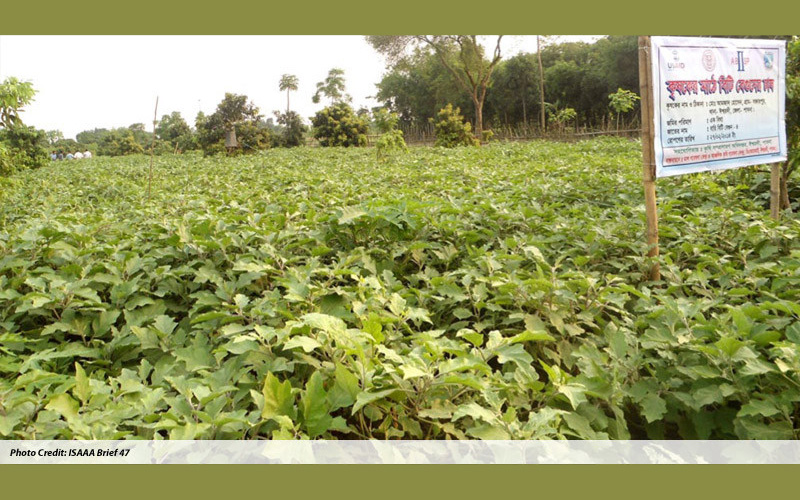 Mark Lynas, opponent turn advocate of GM technology, writes in the New York Times that the scientific community must not allow the green movement to stand in the way.

‘In a rational world, Mr. Rahman would be receiving support from all sides. He is improving the environment and tackling poverty. Yet the visit was rushed, and my escorts from the research institute were nervous about permitting me to speak with him at all.’

That is Mark Lynas writing in the New York Times (link at end of this report) about his meeting with a Bt brinjal farmer in Bangladesh.  Lynas is an advocate of genetically-modified crop technology after being an opponent for many years. He is referring to Mohammed Rahman, a smallholder farmer in Krishnapur, about 95 km from capital Dhaka.  Rahman is one of 108 farmers in Bangladesh currently permitted to try out the new variety, which was approved for commercial cultivation in October 2013. The meeting was arranged by the Bangladesh Agricultural Research Institute. Rahman, he says, has been able to bring down the cost of cultivation, as Bt brinjal does not require insecticide sprays against the fruit and shoot borer, and sell his produce at a premium. He has made ten harvests already. (For Bangladesh’s Bt brinjal story on this website, click here)

Lynas’ visit was hurried because of the threat of violence. The coverage of Bt brinjal in the Bangladesh press has been incendiary, he says. Activists have been forcing the government into revoking its approval and have tried to pressure farmers into uprooting their crops. Whether in India, the Philippines, Africa or Europe, the anti-GM campaign has been more successful than the denial of climate change or the efficacy of vaccination.

The scientific community is losing the battle, says Lynas. In the United States, while 88 percent of scientists surveyed by the Pew Research Centre said it was safe to eat GM food, only 37 percent of the public agreed. ‘We need the technology. We cannot let the green movement stand in its way,’ is Lynas’ concluding message to NYT readers.