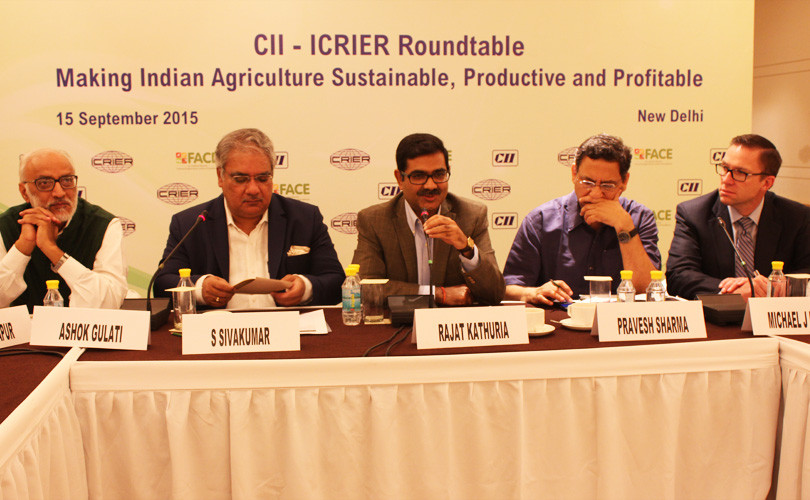 Perhaps an algorithm would be needed to determine which combination of views expressed at the roundtable would make Indian agriculture truly sustainable, productive and profitable, reports Vivian Fernandes.

‘Digital agriculture or big data in agriculture is potentially the next revolution in agriculture which can benefit smallholder farmers in India and large commercial farmers around the world,’ says Michael J Frank, Monsanto’s head of global business. He was speaking on the theme, ‘making Indian agriculture sustainable, productive and profitable,’ at a round table organized by the Confederation of Indian Industry and Icrier, a Delhi-based research organization.

Indian agriculture was aligned to food security rather than sustainability, said Shyam Khadka, India representative of the Food and Agriculture Organization (FAO) putting the theme in context. The emphasis on wheat and rice through assured procurement at minimum support prices had created distortions. Agriculture policy would have to be reworked to make it as differentiated as the country’s varied agro-climatic zones. The use of natural resources, like ground water is misgoverned and communities, through panchayats, should be empowered to manage them, he said.

Frank said Monsanto’s two fee-based advisory services  for better utilization of nitrogen and monitoring of soil health, launched earlier this year in the United States, would make agriculture more sustainable. One calculated the amount of nitrogen that would need to be applied to a crop on the basis of parameters like atmospheric nitrogen, soil type and weather patterns impacting a farm in the immediate previous years. The other determined the incidence of pests and diseases in small grids within a field with the help of multi-spectral imaging.

Monsanto had mapped forty critical and multi-variable decisions which farmers made based on advice and own experience. Digital agriculture could make those decisions more intelligent, Frank asserted. It would bring together sensor technology, the irrigation industry, farm equipment makers and data scientists who would have to develop algorithms to improve decision-making by farmers.

‘When a farmer broadcasting seeds uses a seeder it is precision agriculture,’ said Rohtash Mal, trying to strip the term of some of its aura. An entrepreneur whose start-up hires out farm equipment in Madhya Pradesh, Mal said market models were needed to bring technology to farmers. ‘Machines cannot be dumbed down beyond a point to reduce costs,’ he asserted so hiring in costly but smart equipment was the only option for smallholder farmers who wished to improve their profitability. Mal cited ultra-violet radiation to pasteurize milk as a smarter option than heating milk or chilling it to kill bacteria.

Khadka agreed that digital agriculture could provide customized solutions but these should be transparent so that farmers actually benefited and not the companies providing them. ‘The good thing in Indian agriculture is that there is enormous scope for improvement. It is not all gloom and doom,’ he said.

Ashok Gulati saw rural unrest in agriculture growing at 1.7 percent on average for the past three years, while the overall economy was growing at about seven percent. For agriculture to be sustainable, the government would have to rethink subsidies and incentives. Some of the Rs 70,000 cr annual subsidy on power could be redirected at solar pumps, which were costing about Rs 1 lakh per horsepower. Free power and assured government purchase was making Punjab grow water-intensive rice unsustainably when Eastern India was better suited. Ditto with sugarcane, which should move out of rain dependent areas of Maharashtra currently facing a severe drought, or be put under drip irrigation. A per hectare cash payment to farmers was a better alternative to selling urea at $85 when world prices were $300 a tonne. But knowing who the real farmers were was proving to be an intractable problem. He said India needed ‘institutional engineering’ and better protection of intellectual property so that technologies like drought tolerant seeds could become available to Indian farmers.

Meera Mishra of the International Fund for Agricultural Development said cash transfers instead of cheaper fertilizer were a more efficient way of delivering subsidies but they would have to be matched with information about the prevailing prices of fertilizer and where they were available. She said the government was highly protective of farmers and wanted to do everything itself despite being very inadequate in last mile delivery. She also blamed ‘hyperactivism’ for policy distortions. Mishra found government-run farm equipment hiring centres in Madhya Pradesh ‘not working’ because of their bureaucratic approach. She praised community managed equipment hiring services in Maharashtra.

Farmers were taking greater chances with commercial crops without risk mitigation tools, said Pravesh Sharma, managing director of the Small Farmers Agribusiness Consortium, a state promoted patron of farmer producer companies. As markets in staples like wheat and rice were rigid, they were growing soyabean or cotton. A young farmer he met while touring Marathwada in connection with an official study last year said he had grown cotton for five years and made profit in only two of them. But he would grow cotton the next year because a single profit would wipe out past losses. ‘He was gaming nature,’ Sharma said, emphasizing the need for crop insurance, which, in his assessment, now covers just 15 percent of total cropped area, and access to bank finance, which is cheaper.

Sharma also blamed the ‘unstable policy crisis,’ for the plight of farmers.  Policies like trade bans were led by events. He offered five solutions, one of which was easier leasing of land — outlawed in all but two states. The other was farmer producer companies as an alternative to cooperatives to bring economies of bulk purchases, adoption of good agronomic practices and retention of a larger share of retail value by smallholder farmers.

There were as many views presented at the round table as there were participants. Perhaps an algorithm would be needed to determine which combination of them would make Indian agriculture truly sustainable, productive and profitable.