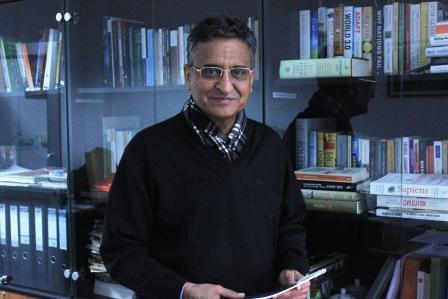 For a country that imports more cooking oil than it produces, India should have been fastforwarding approvals for commercial cultivation of GM mustard. But it has been quite blase about it. Surprisingly, the technology is not privately-owned. It has been developed by geneticist and former vice-chancellor of Delhi University, Dr Deepak Pental, with public funding. Only two of five states from whom no objection was sought for Level Two bio-safety trials have given the go-ahead, reports Vivian Fernandes

The pull of a technology that boosts mustard yield by between a fifth and a third should have been as strong as the affinity of pakodas for mint chutney in a country that imports more cooking oil than it produces and laments the lack of breakthroughs in oilseed crops, but India is dithering.

The mustard hybrid developed with transgenic technologies by a team led by Deepak Pental, professor of Genetics at Delhi University and its former Vice-chancellor is almost ready for use on farmers’ fields and could be widely planted in about three years – the time it takes to produce seed in large quantities – if trials were allowed. ‘Once the farmer gets it, believe you me, like Bt cotton it will spread and nobody will dare to suggest a recall,’ says Pental, referring to Bt cotton, India’s only transgenic crop approved in 2002, which is such a hit with farmers that it covers 93 per cent of area under cotton.

Pental rues the fact that his time – much better spent on research – is going into petitioning state leaders for permission to conduct trials (and fighting a law suit by a colleague for alleged plagiarism). State permissions are a requirement made necessary by former environment minister Jairam Ramesh, who stalled the commercial cultivation of Bt brinjal, (allowed in Bangladesh since last year) and imposed a ten-year moratorium on testing of GM seeds (lifted by his successor VeerappaMoily).

Opposition to GM crops under the previous government came from noisy environment lobby groups like Greenpeace, Gene Campaign and the Leftists. While they are relatively quiet, the affiliates of the Rashtriya Swayamsevak Sangh (RSS) have taken over, says a senior official in the Department of Biotechnology. The Swadeshi Jagran Manch and the Bharatiya Kisan Union have a fetish for self-reliance.. So while the Bharatiya Janata Party government at the centre says field trials should be allowed so that the risk and potential of GM crops can be assessed, its governments in the states are not obliging, even though the trials will be conducted in university sites, monitored by the Indian Council of Agricultural Research under the supervision of plant breeding specialists.  Rajasthan went silent on permission for level-two bio-safety tests on GM mustard hybrids, after allowing level-one trials for two years. Madhya Pradesh said it is a controversial issue. Haryana was in the throes of state elections so no decision was taken. Uttar Pradesh did not respond. Level-two trials are now being held at three sites – two in Punjab and one in Delhi – instead of ten.

Pental’s modification, for which he has obtained patents in Canada and the United States, imports the vigor of East European mustards into Indian varieties to enhance yields by using a 1990s innovation called Barnase/Barstar-based male sterility/ fertility restoration system developed in Belgium. A protein obtained from a bacterium is used to induce male sterility in one parental line by inhibiting the production of pollen and prevent self-pollination. Another protein obtained from the same bacterium is introduced into another parental line to produce an inhibitor that counteracts the sterility causing enzyme. The transgenes are expressed in the male part of the flower only in a layer of cells that feed developing pollen. The hybrid plant obtained by crossing the two lines is fertile and produces seed which farmers can harvest.

Canada deployed this technology in 1996 in rapeseed, a close relative of mustard and is a global exporter of quality rapeseed oil under the brand name ‘Canola’. In 2014 – all the rapeseed grown in 7.7 million hectares of land in Canada was transgenic – either (herbicide) glyphosate-resistant or Barnase/ Barstar- based hybrids.  Using transgenic technologies Canada has increased rapeseed production to one-and-a-half times of that in 1995. Following Canada, USA and Australia also grow GM rapeseed hybrids. Canada has emerged as a major exporter of Canola oil to many countries that are wary of GM technology, including India. There is no way of distinguishing transgenic rapeseed oil from conventionally-produced rapeseed oil, because proteins are not present in the oil extracted from the seed.  In 2011, Canada exported 7.9 million tons of seed of rapeseed globally for extracting oil for human consumption and meal for livestock feeding.

Male sterility can also be achieved cytoplasmically – and Pental has a hybrid called DMH4 – but this hybrid is limited as there is only one female parent and therefore, freedom to make crosses in any combination is not there. Transgenic technology is more versatile. Another of Pental’s transgenic mustard yields oil, which he claims is healthier than olive oil. According to Pental it is low in saturated fats and high in oleic fraction like olive oil but retains heart health-protecting omega-3 fatty acid content of mustard. This oil is superior to both olive and canola oils, the two premium edible oils available in the global and Indian market.

Plant biotechnology is a potent technology. Pental compares it to a jet engine while conventional breeding is akin to turbo props. Moreover, there are breeding objectives for which classical breeding has no answers. Analytical techniques are now well developed and instruments are available that can detect even traces of metabolites or foreign proteins in food. However, there is that outside chance of unintended consequences of a transgenic technology. Science and technology can never assure zero risks.

‘This is where science loses out to deterministic thinking,’ says Pental. It cannot speak in certitudes as NGOs do. They can cry ‘poison, poison’ even though both humans and animals have consumed millions of tonnes of genetically-modified food over the past two decades without being harmed.

In India there is a fear that multinationals will take control of food production if their patented high-yielding seeds are allowed to edge out indigenously developed lower-yielding ones. The very success of multinationals like Monsanto is being held against them. But the private sector will seek profit from investments made. In the United States, the public research system gives the initial thrust to new technologies, which are then licensed to private corporations. In India, after the introduction of Bt cotton,‘the whole breeding work in the public domain has collapsed because there is no incentive,’ says Pental. The only way to rectify complete domination of multinationals is to make efforts through the public research system. Public system technologies can be cheaper as development cost is defrayed by the government.

The irony is that Pental’s work has been funded by the government and the National Dairy Development Board. NDDB’s founder Verghese Kurien encouraged Pental as part of Operation Dhara, to achieve breakthroughs in oilseeds production. Pental estimates that around Rs. 50 crore has been spent on breeding of mustard, a major part has gone into developing productive hybrids in mustard using a combination of conventional and transgenic breeding. This is not counting salaries of self and staff and establishment costs, which have been borne by Delhi University.

There is enough clarity on biosafety issues to avoid any mistakes. The battle for release of transgenic mustard, and other transgenic crops, is ideological and will have to be fought politically.