Vivian Fernandes reports that wheat procurement in Punjab is expected to be about the same as last year:  130 lakh tonnes. Measures to contain the spread of the infection have affected the arrival of wheat in the mandis, but more of it is being lifted and stored in the warehouses or despatched to the consumption points than at this time last year.

Wheat procurement operations, which began in Punjab on 15 April, are in full swing, the state’s Agriculture Commissioner Balwinder Singh Sidhu said. Arrivals as of 1 May at 75.08 lakh tonnes were 13 percent less than on the same day last year because of restrictions on transportation and physical distancing norms being implemented at the mandis. Purchases at 73.14 lakh tonnes were also about 13 percent less over 1 May, a year ago. 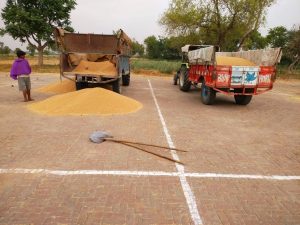 The quantity lifted as of 1 May was 43.28 lakh tonnes. This is 59 percent of the purchased quantity and 46 percent more than the quantity lifted as of the same day last year. State agencies like Punjab Grains Procurement Corporation (Pungrain), The Punjab State Cooperative Supply and Marketing Federation (Markfed) and Punjab State Civil Supplies Corporation (Punsup) are more active in procuring grain than the Food Corporation of India.

Only 22,000 tonnes have been purchased by private traders. This is 0.30 percent of the arrivals. Sidhu said private traders were preferring to buy from Uttar Pradesh, where wheat is selling for less than the minimum support price of Rs 1,925 a quintal. Perhaps, they are also deterred by Punjab’s high mandi taxes. Last year private trade had brought 63,000 tonnes as of 1 May.

Sidhu said there was quick movement of grain out of Punjab for free distribution to migrant workers who have been locked down in cities and away from their homes in the villages. Every day about 25 trains each with a capacity of at least 2,000 tonnes were leaving the state, he said. 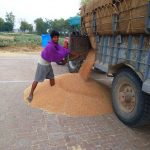 This year’s wheat procurement is expected to be around the same as last year’s – 130 lakh tonnes. At the current rate, the operations might get over by 10 May.

In view of covid-19, farmers are not allowed to come at will to the mandis. The commission agents have been given tokens, which they distribute to farmers, who have to arrive at the prescribed time and maintain a distance from the others. There is no shortage of workers, Sidhu said, because most migrant workers have arrangements of their own to stay. Local Punjabis also have no other wage opportunities because activities like construction are dormant.