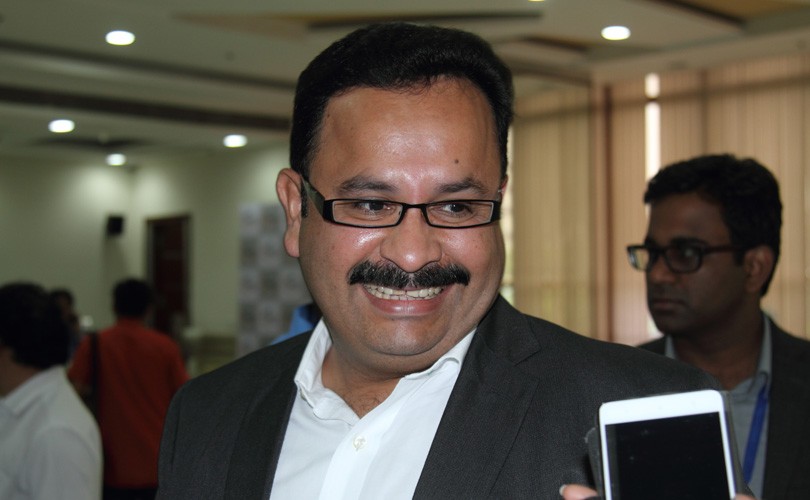 Karnataka’s Additional Secretary Manoj Rajan is Managing Director of Rashtriya e-Market Services Pvt Ltd (ReMSL), the equal joint venture of the state government and commodity exchange NCDEX. Karnataka has pioneered marketing reforms in agriculture with Rajan at the steering wheel. These have been the template for the central government’s electronic National Agriculture Market or e-NAM. Here is his edited interview with Vivian Fernandes.

Vivian:  Demonetisation has been blamed for aggravating the price slump caused by good monsoons last year and plentiful harvests.

MR: I see demonetization as an opportunity for market reforms, one objective of which is to ensure transparent transactions through direct payments to farmers. After demonetisation from 8 November last year, for the first three weeks market participants were sceptical. They were unsure when and how payments would be made. Arrivals of storables, not perishables, decreased but did not impact prices. From December onwards once things started settling down and people started getting money, I didn’t see any negative impact of demonetization. Some farmers got paid by cheque. A small number of payments were deferred. The environment has now become conducive for online payments.

Karnataka has had electronic electronic trading  on a state-wide platform for the past three years. What has been the experience?

MR: There has been enhanced transparency in market operations. Earlier farmers would return feeling they did not get the right price or the weighing was not right. The confidence level of farmers in the market has increased.   The farmers’ share in the consumer price has gone up. In the case of dry chillies, there is an increase of 8-10 percent. This I would attribute to the marketing chain being shortened. Bulk and institutional buyers buy directly from the market. NITI Aayog has said there has been a 38 percent increase in the modal price or the price at which most lots are sold (in Karnataka). When we analyse the price of 15 commodities over two years, there has been a 25 to 70 percent rise in prices that farmers got. These 15 commodities account for Rs 22,000 cr of the state’s Rs 36,000 annual traded volume in the mandis. We have notified 92 commodities for trading, of which around 60 are traded. We find chilly farmers from Andhra coming to Karnataka because the transactions are settled the same day. Earlier, in the manual system it would take 2-3 days. Because of increased competition, higher prices are being offered.  (Traders from seven states are participating- Ed).

Our neighbouring states had to intervene when copra prices crashed. They had to procure at support prices. We did not have to do that in Karnataka because the market prices was a thousand rupees (per quintal) more than the support price. If you create an enabling environment, markets will take care.

If farmers do not get the price they want, do they sell at whatever price they get, or can they store  and sell later?

Depends on the commodity, whether it can be stored and the compulsion of the farmer…

Do you have storages…

In the last two years a lot of storage capacity has been built both within the APMC and by the warehouse corporation. We have floated the concept of warehouse-based sales where farmer can store  his produce and get 50-70 percent of the value and sell when he finds the right price.  (Rajan says the state will need 300 warehouses of 10,000 sq ft each- Ed).

How many farmers have availed of this facility…

We have piloted it. It is going to start soon. This will be the year of warehouse-based sales, integrated logistics, assaying…

Do farmers produce to standards?

There was no differentiation in quality. There was no incentive for the farmer to produce good quality. Now that we have brought in assaying, we are telling the farmers, “if you bring down the moisture to 8 percent this is the price you will get, but if the moisture level is 10 percent you will get a lower price”. This communication is happening through our stakeholder education programme covering 20,000 villages. The farmer is now getting his produce market-ready. Assaying-based sales will encourage quality and the entire marketing chain will benefit.

In how many mandis have you installed assaying facilities?

In 40 markets assaying has been established and is running successfully: about 25 percent of the arrivals are being tested. This year another 50 mandis will be added. (Karnataka has 157 mandis. All of them are a common platform – Ed).

If farmers are getting better prices why has Karnataka announced a loan waiver?

These are two different things… (laughs).  (Rajan later says in the unrecorded part of the interview that electronic trading on a unified marketing platform is meant to ensure transparency; it does not guarantee high prices. There has been drought in Karnataka three years, including last year when the rest of the country got normal rain. E-trading cannot alleviate the distress; hence, the loan waiver –Ed).