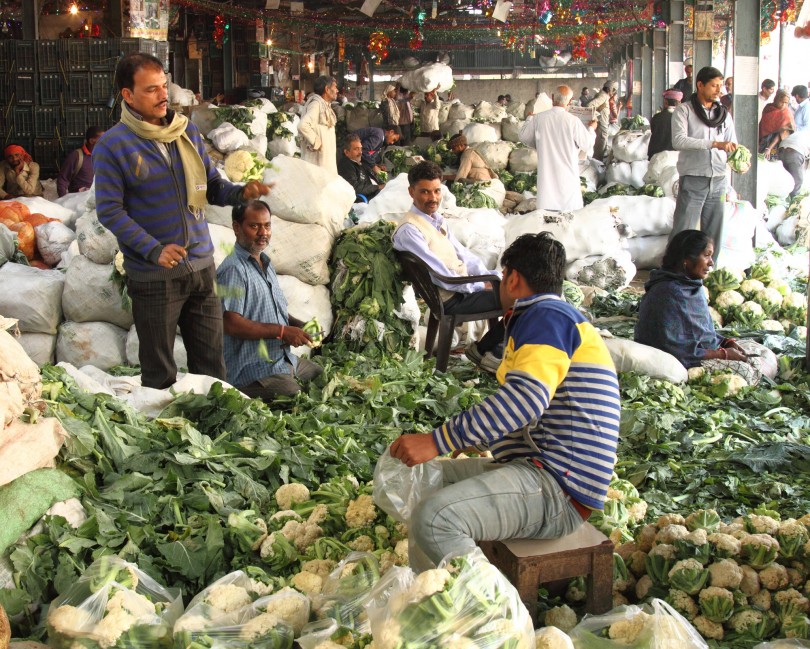 At Azadpur fruit and vegetable mandi in Delhi, officially designated as a “market of national importance,” there is hectic drum-beating and vigorous gyrating. It is 16 December and three elected representatives of commission agents to the 10-member board of the agricultural produce marketing committee (APMC) are celebrating their victory. One of them is a member of Delhi’s ruling Aam Aadmi Party (AAP). News reports say the other two are not, but have allied with it. Businesses like to stay close to political power.

The mood in the mandi however is not celebratory. It is packed with trucks, but their contents are not moving. It is three days since a 16-tonne truck was parked in front of Mohammed Zakir’s stall. He auctions musk and water melons, which arrive from Anantpur in Andhra Pradesh. “I have sold three tonnes so far. Before notebandi, I used to sell at least one truck-load daily,” he says. Zakir has been operating at the mandi since 1994. Bad weather dislocates business temporarily but he has not seen this kind of prolonged mandi or slump, which is entirely man-made.

Raja Babu, who operates a commission agency named after him, echoes Zakir. The rates of melon have fallen by half after notebandi to Rs 10 a kg, he asserts The cost of transportation from Anantpur is Rs 4 a kg. Farmers will barely recover their cost at the price melons are fetching. [Prices displayed on the APMC’s website do not show such a drastic reduction. Melons were selling in the range of Rs 300-130 depending on quality before demonetisation. In the first fortnight of December, their prices were in the range of Rs 220-130 per box of 8 kg).

Chandra Mohan says pomegranate rates have fallen from Rs 700 a box of 10 kg to Rs 550, but there are no buyers. His daily sales have declined from about a thousand boxes of 10 kg to 400, he claims. [Official figures show the rate has fallen from Rs 950-1,000 per box of 10 kg for the best grade before demonetisation to Rs 700-750 after the event).

“Currency flow nahin hoga toh grahak nahin ayenge,” (customers will not come if there is no currency flow) says Harbans Lal, a mechanical engineer who gave up employment in a government irrigation department to run his father’s business about 30 years ago, as his salary fell short of his expenses. “Kisan ko bahut nuksan hua hai” (farmers have suffered), he adds.

At the kisan shed in the vegetable yard next door, Meher Singh of village Paldi in Haryana’s Sonepat district has sold 15 bags of cauliflower at distress prices. From Rs 10-12 a kg before notebandi, cauliflower rates have dropped to Rs 2 a kg. “Pit gaya ji” (I am ruined), he laments.

Jitender Khokar of village Chaprauli in western Uttar Pradesh sold 800 kg of methi or green fenugreek for about Rs 3,000. He employs four labourers for Rs 150 each to pluck it. His four family members supplement them. “This should sell for Rs 14-15 for me to recover the cost,” he says.

Farmers at the kisan shed or farmers’ yard pay 1 percent fee on sales to the mandi. Commission agents can charge up to 6 percent. Buyers are supposed to pay, not sellers. But the fee gets factored in the price.

Babu Chaudhary of village Nangal, also in Baghpat, has sold 600 kg of green chillies at Rs 14 a kg. This is almost half of Rs 25-30 a kg he used to get before 8 November when high value old currency notes got invalidated. Green chillies are plucked once a fortnight. The plucking charges are Rs 6 a kg. The packing and transport charges add up to Rs 1.50 a kg. Chillies are very vulnerable to pest attacks so they are doused with pesticides. Add the cost of the sprays and there s little left, Chaudhary says.

He grows vegetables to give fields a break from sugarcane, the default crop in western Uttar Pradesh, where income is assured because state governments fix the prices which sugar mills should pay.

Meher Singh got just Rs 2 a kg for cauliflowers. Photo by Vivian Fernandes.

Azadpur mandi is the country’s largest fruit and vegetable market. Its credibility makes it such a draw, says Azadpur APMC Secretary Satnam Singh. It gets produce from all over the country: pineapple from Nagaland, coconuts from Kerala, pomegranates from Maharashtra and melons from Andhra. Sixty percent of Jammu & Kashmir’s apples are auctioned at the yard. It is 78 acres in extent; there are yards that are bigger but none does more business per square metre. On average 14,000 tonnes of produce arrive daily. With 2,200 commission agents and about Rs 9,000 cr in annual turnover it is the busiest. Despite about 20,000 transactions per day, hardly about 10 disputes come to the APMC board for resolution, Singh says.

Trust lubricates business at the yard. Commission agents extend credit to traders and large suppliers and that explains why it is the preferred platform. But activity is slack because money is not circulating. Fruit retailers are unable to sell so their buy orders have shrunk.

[Incidentally, hawkers are being used to recycle invalidated currency, farmers at the kisan yard say. Their customers in Delhi’s neighbourhoods ask they to accept payments in old 500 and 1,000 rupee notes by paying extra. The hawkers in turn buy in small quantities from many farmer-sellers at the kisan yard and pay them each with old notes. The farmers get a small premium,  so they oblige.]

“Goods are changing hands but cash is not,” says Singh. Suppliers are sending stuff because they know there will be delay in payments, but no defaults.

Data on Azadpur mandi’s website shows a mixed picture. Apple arrivals have declined since demonetisation. In the week before notebandi daily arrivals ranged from 2,050 tonnes a day on 1 November to 3,752 on 7 November. Apple arrivals on 9 November, a day after the announcement of demonetisation, were 3,625 tonnes. They have steadily declined. In the first fortnight of December, arrivals ranged between 2,268 tonnes on 1 December to 1,380 tonnes on 13 December.