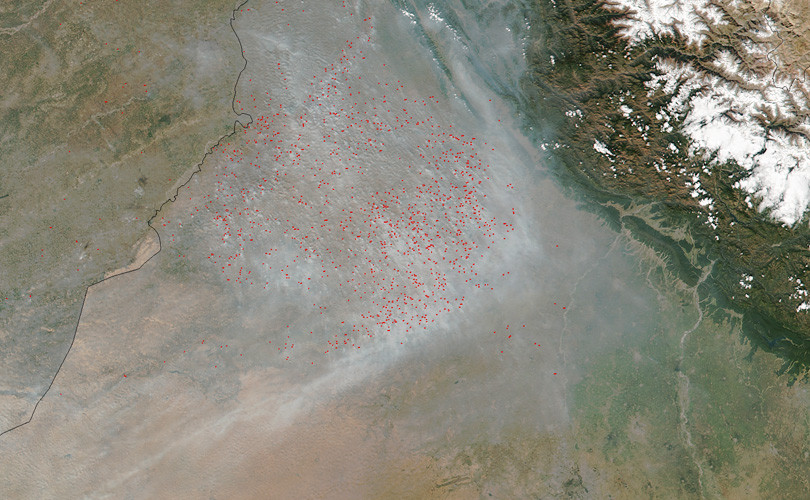 Straw is not for burning. If retained in fields, it can enrich the soil with nitrogen, phosphorous and sulphur, prevent loss of moisture and check the emergence of weeds. Vivian Fernandes reports that the Punjab government is rather complacent in checking a polluting practice and promoting one that will keep both its agriculture and farmers healthy.

Punjab’s farmers would not be burning paddy straw as they prepare fields for wheat sowing in winter if they followed conservation agriculture (CA) practices propagated by the Borlaug Institute for South Asia. BISA is a joint effort of the Indian Council of Agricultural Research, and Mexico’s International Maize and Wheat Improvement Centre, which supplied the dwarf varieties of wheat that created India’s Green Revolution.

The Earth Observatory website of NASA, the space agency of the United States, shows hundreds of red dots like scattered confetti on a 30 October satellite grab of Punjab. ‘Red outlines indicate hot spots where the sensor detected unusually warm surface temperature generally associated with fires,’ it said. ‘Thick plumes of smoke drifted from the hot spots.’

The air quality index has dropped by 60 to 80 points in Delhi since Thursday 29 October, the Times of India reported. “It is inching towards the ‘very poor’ zone when children are advised not to spend time outdoors,” it said.

Soot from the burning fields adds to the load of carbon particles emitted by thousands of trucks transiting through Delhi. The Supreme Court has imposed a toll from 1 November, to discourage them. Cold and moisture thicken the atmospheric soup and make the capital’s asthmatic air still less breathable.

Plumes of smoke from burning straw in a field in Bhatinda, Punjab, on 16 October, 2015. The fire might have been set off accidentally because the straw is baled. Perhaps it was headed to a power plant. Photo by Vivian Fernandes.

Since paddy straw is rich in silica it is not fed to cattle in north India. Baling the straw and transporting it to the state’s six plants producing electricity from crop waste is not economical.

For the Indo-Gangetic Plains of northwest India, BISA’s research station at Rajowal in Ludhiana recommends that paddy straw be spread on fields and not burnt. An upward facing fan attached to combine harvesters at the vent from where straw is ejected does this job efficiently. The straw acts like mulch and prevents weeds from growing. It also retains moisture in the soil.

A ‘Happy’ seeder which follows the combine parts the straw in neat rows just wide enough to sow wheat seeds.  Moisture present in the rice fields is enough for the wheat to germinate.

‘An acre of rice straw adds 30 kg of nitrogen, six kg of phosphorous and 11 kg of sulphur, says Pankaj Singh, agronomist and manager of the Rajowal farm. The rotting straw enriches the soil by enhancing its organic carbon content.

No tillage cultivation is another tenet of conservation agriculture. This might sound like heresy in Punjab, the land of the tractor.  About six lakh tractors are said to be deployed in Punjab. They sweat an average of 350 hours a year against about one thousand hours required to justify the cost.

Tillage leads to loss of soil moisture and destruction of capillaries formed by roots of the previous crop, which keeps soil soft. The state’s economic survey of 2012-13 (paragraph 2.35) said zero tillage cultivation saves Rs 3,600 in diesel per hectare (when prices were  higher).

Farmers save time by not tilling. Earlier sowing allows wheat to make the best of the peak growth period in summer and add about half a tonne of grain per hectare by avoiding the days of terminal heat, says Harminder Singh Sidhu, BISA’s station-in-charge.

After the wheat crop, BISA recommends sowing of moong, a short duration crop, which matures in about sixty days. Adding a leguminous crop like pulses to the rice-wheat cycle enriches the soil with atmospheric nitrogen and permits ‘sustainable intensification’ of agriculture.

A ‘Happy’ seeder at work. Machines like these (and minimally-invasive herbicides) make conservation agriculture possible. Photo by Vivian Fernandes.

Punjab’s economic survey says just 750 hectares of wheat area was under zero-tillage in 2001. This had gone up to 7.49 lakh ha in 2011-12. Subsequent surveys do not state the progress since then.

Since wheat straw is used as fodder, Punjab farmers tend to plough the stubble under. BISA disapproves of this practice. It says moong or rice can be sown directly in the stubble covered fields. The seeders have been configured to just scratch the surface for paddy to be sown. Surface sowing raises yield by allowing more secondary shoots to emerge.

In direct seeded rice (DSR) there is no puddling or transplanting.  This not only saves diesel and wage cost but also reduces the environmental cost of paddy cultivation. In transplanted rice, stagnant water is used to kill weeds. The availability of minimally invasive new age herbicide molecules has made DSR possible.

Burning of straw is banned in Punjab. There is also a high court stay. But the law is not enforced, though collectors of some districts have threatened action.

(Top photo:NASA, which said this: On October 30, 2015, the Visible Imaging Radiometer Suite (VIIRS) on the Suomi NPP satellite captured this image of fires burning in the Indian state of Punjab. The smoke likely stemmed primarily from agricultural fires. Farmers often set fire to their fields to clear them before the growing season, which in Punjab resumes in November).

This story was first published in www.thequint.com.  That story here.