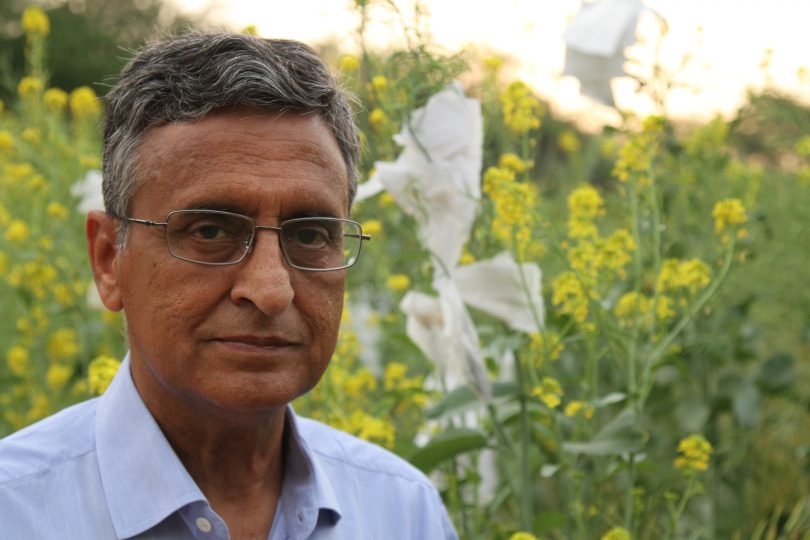 Geneticist and former Delhi University Vice-Chancellor Deepak Pental has come out strongly against agricultural scientist M.S. Swaminathan and his co-writer P.C. Kesavan for their denunciation of genetic engineering (GE) technology and modern agriculture. Accusing them of “pandering to ideologues who are sold on vague ideas of ‘naturalness,’ ‘genetic pollution,’ ‘playing with nature,’ and ‘spiritual agriculture,’  in the latest edition of Current Science, Pental has said that they “seem to speak the language of evangelical environmentalists and ideologues of  many hues, who have been quite successfully blocking the use of recombinant DNA-based GE technologies in plant breeding.”

Pental says Swaminathan and Kesavan’s three previous articles in Current Science are an “exceptionally flawed analysis of plant breeding technologies.” He says their ‘proactive analysis’ of modern breeding technologies is a “reflection of their ideological proclivities.” If their averments are not challenged, Pental says, it will cause serious damage to the efforts to achieve food and nutritional security through R&D.

Pental questions their support for ‘polyploid breeding’ and ‘mutation breeding.’ In support of the first, Swaminathan and Kesavan had cited the example of triticale, a crop containing genomes of both rye and wheat. But despite being around for more than 100 years, triticale occupies only 4.2 million hectares, Pental says, while the crop it was supposed to replace, wheat, is grown in around 220 million hectares.

Pental says the discovery of dwarfing genes in rice and wheat and their incorporation in traditional varieties has kept a growing global population – the result of better healthcare – fed. Hybrid technology has boosted yield. Till 1936, maize yield in the USA was around 1.6 tonnes per hectare. The yield started to increase only after hybrids were introduced. Currently, maize hybrids yield around 10.9 tonnes/ha in the US.

The Haber-Bosch process of producing nitrogen fertilizers saved the highest number of lives in history – around 2.7 billion.

Pental observes that Swaminathan had supported hybrid technology earlier. As Director-General of the International Rice Research Institute (IRRI) Swaminathan had said he had helped China set up four rice research institutes, one of which was dedicated to hybrid rice breeding. Swaminathan’s change of stance and his assertion that “such technologies provide opportunities for the corporate sector to produce hybrid seed for sale at considerable profits,” is “neither based on scientific nor any sound economic analysis: it is an ideological stance.”

Speaking at the 2013 World Food Prize ceremony, Pental recalls Swaminathan saying. “I am particularly happy that on the 60th anniversary of the discovery of the double-helix structure of the DNA molecule, three very eminent biotechnologies … have been recognized for their work and they will be receiving the World Food Prize. It is very appropriate because I think the science of genetic engineering, the new biology and new genetics have certainly opened up completely new opportunities.” Pental says it is not clear from their three articles “what new evidence has emerged in the past five years for such a dramatic shift in the authors’ position on GM technologies.” Swaminathan had in one of his Current Science articles said that “genetic engineering must be need-based. Only in very rare circumstances (less than one percent), there may arise a need for the use of this technology.” Who will decide this one percent? asks Pental.

He also warns the country against giving in to the opponents of science and cites the example of Nikolai Valivol, a great geneticist who was exiled to Siberia by Stalin on the basis of the claims of the maverick scientist Tromfin Lysenko, who believed that plants could be conditioned to be resilient by exposing them to harsh environmental conditions.

Pental also questions the claims made by Swaminathan and Kesavan against Bt cotton and GM Mustard (which Pental has developed).  He says the onslaught by anti-GE activists has been tragic for global food security; but when scientists avoid evidence and facts and try to scuttle scientific progress the consequences can be even more damaging, according to him.